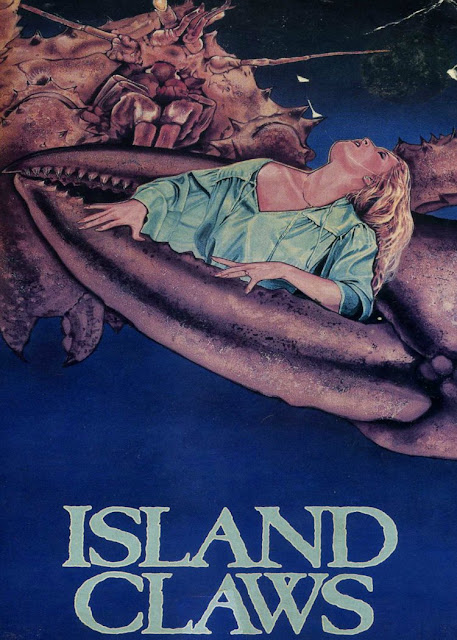 Plot: When a leak at a Florida power plant dumps several thousand tons of toxic waste into the ocean it causes the local crab population to suddenly start growing to monsterious size and start moving in on the local population of a nearby fishing village.

Review: The sole film from director Hernan Cardenas while also written by Ricou Browning and Jack Cowden who also created “Flipper” making their move into writing a movie about killer giant crabs a perfectly logical one. This late entry in the animals run amok genre doesn’t exactly bring anything new to the genre outside of the fact that its about giant crabs which compared to the numerous shark movies out there is certainly one of the lesser seen creatures of terror. I mean even ants to my knowledge have clocked up more movies than our crustacean pals have but stumbling across this on Amazon Prime who recently have become almost shameless with the kind of movies they choose to stock their on demand library with I thought it was an interesting enough concept to check it out.

Opening to a research lab were they are conducting experiments in increasing the size of crabs using warm water and growth hormones as a warm to help increase the world’s food supplies, especially when they discover that the local crab population near the power plant have been growing bigger which of course is nothing to do with the fact that a few tons of toxic waste have been dumped in their part of the ocean which anyone up to speed on their movie logic will know already that movie radiation equals giant monsters compared to real life were it sadly this is never the case. It’s here though that we are introduced to journalist Jan (McDonnell) who is writing a story on the lab only to soon also get involved with scientist Pete (Hanks).

Elsewhere bar owner Moody attempts to keep the small town together by acting as their unofficial head as he keeps the peace amongst the locals usually by keeping them boozed up in his bar while he also acts as Pete’s adopted father after his parents were killed in a drink driving accident caused by Jan’s father who also runs the power station responsible for all the giant crabs. There is a small part which hints at bad blood between the two fathers but is as dropped as quickly as its introduced like so many of the sub-plots in the film which includes a group of Haitian refugees who wash up on the outskirts of town and hide out in the mangroves and whose sole reason for their inclusion seems to be so that Cardenas could work in an angry mob who thanks to some old school racist tendency believe that the Hiatians are to blame for all the strange happenings in town which they equate to voodoo reminding us once more that there are few things as dangerous as a group of drunks with an idea.

The crab attack are sadly pretty sparse here and for the most part involve actors working with a swarm of real crabs which are actually used pretty effectivly especially during one of the scenes highlights when they swarm the school bus which one of the locals Amos lives in with his attempts to battle the invading crabs showing us that the banjo is as little use as a weapon as it is an actual instrument.

The climax of the film though see’s the towns folk battling an 8 foot crab which somehow has managed to remain hidden until it suddenly destroys Moody’s house. Created by Glen Robinson who’d previously worked on effects for “King Kong” (1976) and “Flash Gordon which far exceeds the expectations of the films low budget especially when he built a complete crab and not just the front portion which you’d expect. While still an impressive looking design it sadly lacks any real movement meaning the actors are forced to run around a lot shooting at it with shotguns and generally trying to sell it as being more of a threat than it really is and perhaps Cardenas might have been better just sticking with his initial crab swarm.

The downside to the film other than the occasionally plodding plot threads certainly comes from the lack of lighting during the night sequences which really make it hard to see what exactly is supposed to be happening half the time, which one of the attack scenes is for the most part impossible to make out meaning that it lost much of its effect.

On the whole its not a bad film just not the sort of film that your likely to watch more than once and even then its throwaway entertainment at best especially if your a fan of the genre.
Posted by Elwood Jones at 08:12 No comments: 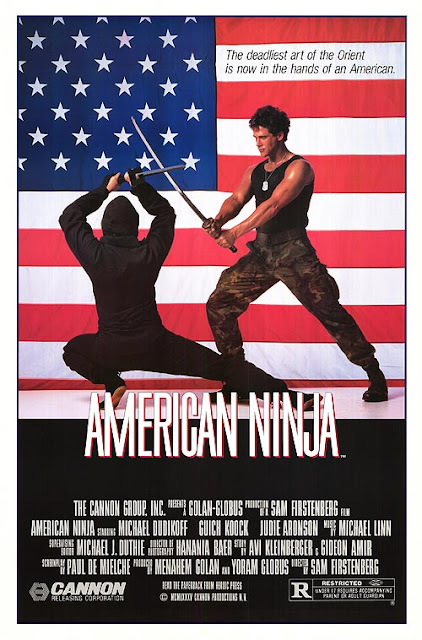 Plot: Joe Armstrong (Dudikoff) a drifter conscripted into the U.S. Army to avoid going to prison finds himself drawing on his ninjutsu training when his unit are caught up in a plot to steal weapons from the army being carried out by the Black Star Order of Ninjas.

Review: A standout title for Cannon films which would inturn spawn a further four sequels as here they once more attempt to cash in on the Ninja trend which itself was less focused on any kind of historical accuracy and instead more focused on the look of the Ninja outfit and general excuse to wheel out all kinds of fun gadgets and weapons.

Here Michael Dudikoff plays Joe a loner who has been trained in the ways of Ninjutsu from birth which certainly comes in handy when he’s required to pulls out these skills throughout the film and despite not being a trained martial artist tapped into the James Dean vibe that Cannon films wanted after audiences struggled to get on board with the idea of a female ninja in the equally cult “Ninja 3: The Domination”. Certainly Dudikoff nails that James Dean persona of the loner with a chip on their shoulder but then here Dudikoff is far from the most expressive of actors and for some reason seems to have the same expression throughout. Even at the end were he is the hero surveying the smouldering remains of the battlefield does he not crack a smile and instead maintains the same gruff expression.

Thankfully what he might lack in expressions he does make up for in terms of his abilities as an action star even though he didn’t have any martial arts skills at the time of filming unlike his co-star Steve James which turned into something of an issue between the two with Dudikoff not wanting to be shown up with James requesting that his fight scenes be filmed on the opposite side of the compound to Dudikoff to avoid further problems. The pair would eventually squash their issues halfway through the production but watching the film you could easily believe that Dudikoff was a trained martial artist especially when you look at scenes like the sparing session between Dudikoff and James. James though makes for a great co-star and much more than a sidekick which is character had originally been written as and thanks to James changing a lot of the dialogue which was one of the main conditions of him agreeing to do the film and certainly it makes him much more of his own heroic character especially during the final showdown were he gets to fight his own battle.

The action throughout while perhaps lacking in any kind of logic especially when you get multicoloured ninja’s but it still manages to be enjoyable as a popcorn action flick and with it’s high bodycount and especially during the finale which features a ninja vs ninja showdown between Dudikoff and the head ninja played by Tadashi Yamashita in a fight which is a mixture of the pair trading Ninja gadgets (which include wrist lasers!!) while simultaneously engaging in an obstacle course. Needless to say this film more than delivers in mindless fun.

Perhaps having some kind of expectation going into this film, seeing how its an American Ninja movie perhaps made me view this in a more forgiving light, but when approached with the view point of just having fun with the movie it certainly delivers while the tight runtime which dedicates a large portion to action scenes equally helps and really makes me keen to see what else the series has to offer.
Posted by Elwood Jones at 14:08 No comments: