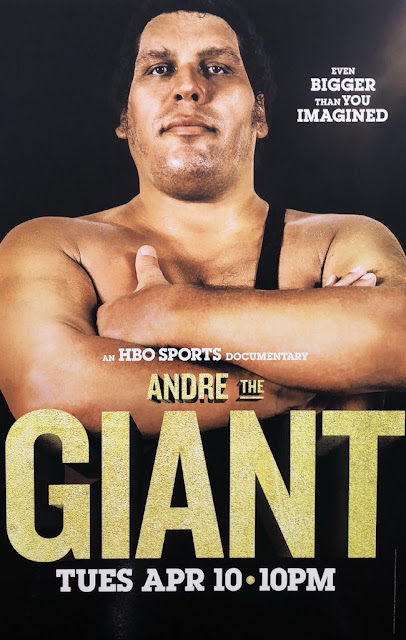 Review: If we are to believe everything about Andre we would be lead to believe he had three rows of teeth and could drink 107 beers in a single sitting. But standing at 7ft 4 in Andre was as big as his legend not to mention one of the most recognisable faces in professional wrestling even to non wrestling fans and it’s this legend that director Jason Hehir attempts to find the truth behind as he features extensive interview footage with his family, his fellow wrestlers and “Princess Bride” cast members to craft a portrait of this iconic figure. This is a film certanly not afraid to showcase his life from the triumphant highs to the crushing lows which lead to his premature demise.

Charting his rise to fame in the first half it’s clear that Hehir is as fascinated with Andre’s status as a real life giant as everyone who saw him while he charts the making of his legend as he starts his rise through the wrestling ranks becoming a headline attraction back when wrestling was still broken up into territories defined by local television coverage. Soon ending up as one of the biggest stars of Vince McMahon’s “World Wrestling Federation” now better known as the “WWE” as he helped McMahon essentially bring the end to the territories as the company rode the introducion of cable TV.

One of the strengths of the documentary really is in how Hehir manages to make a film which is as appealing to the establish fan as it is to the newcommer as while there might be extensive talk of the wrestling territories and backstage politics here memorably highlighted by Andre chasing off his minder while he’s trying to play cards. Hehir manages to explain the mechanics of the wrestling industry to the newcomer without slowing down the pace of the documentary. To this extent it can be alittle jarring to have Hulk Hogan seemingly hijacking the documentary to talk about his own career but thankfully he’s on refreshingly modest form and its inclusion is more to build up the showdown between himself and Andre and their iconic match at Wrestlemania 3.

As a wrestling fan the film more than delivers especially with the wealth of archive footage which is included, especially for the lesser seen early portions of Andre’s career. The documentary also does not shy away from the brutal backstage politics of wrestling with many of the wrestlers interviewed openly discussing Andre intentionally roughing up wrestlers who either annoyed him or he perceived as threatening his spot and its refreshing that the documentary doesn’t shy away from the more negative aspects of Andre which only adds to the build up to his match with Hogan were going into the match Hogan had no idea if Andre was going to go along with his match plan or not.

While a large portion of the film is unsurprisingly devoted to his wrestling career Hehir does touch briefly on the making of “The Princess Bride” were he memorably appeared as the giant Fezzik a role which William Goldman had written with him in mind. Perhaps disappointingly to fans of the film this section is one of the briefest but it does feature some fond memories by his co-stars Cary Elwes and Billy Crystal aswell as Director Rob Reiner reminiscing of dealing with a drunk Andre suspended on wires so they could film a horse riding sequence.

Unquestionably this is both touching tribute to the legendary wrestler which wrestling fans will certainly enjoy but at the same time accessable enough that the uninitiated will still find much to enjoy here.
Posted by Elwood Jones at 12:53 No comments: