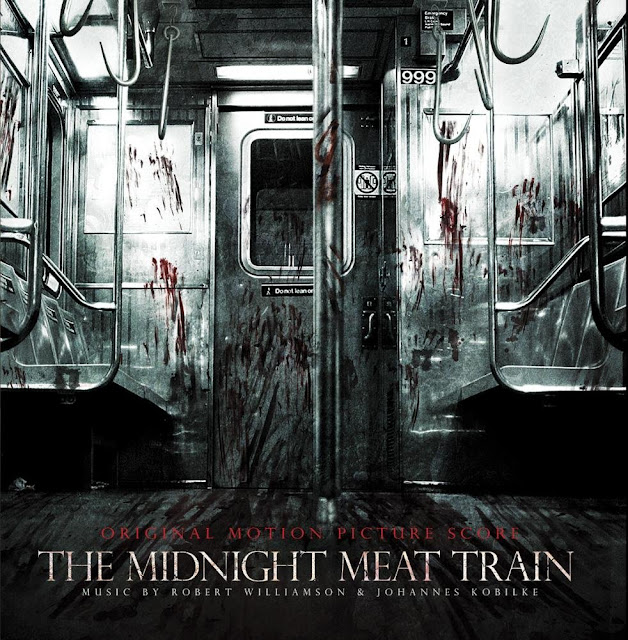 Plot: Leon (Cooper) is a photographer with an obsession with the darker side of the city, however when challenged by gallery owner Susan Hoff (Shields) to find darker subject matter he by chance discovers a serial killer (Jones) using the midnight subway system as an abattoir.

Review: Another film to be adapted from Clive Barker’s “Books of Blood” short story collection this film also marked the English language debut from director Ryuhei Kitamura who much like Barker is equally no stranger to blending genres. My main reason for checking this one out those was the memory of Vinnie Jones’ role as the sharply dressed serial killer who rides the midnight subway trains being compared to that of Arnold Schwarzenegger in “The Terminator” and its certainly a performance he nails here with him imposing form and ice cold demenor.

Bradley Cooper’s role as the photographer Leon meanwhile is kind of confusing as here he plays a photographer obsessed with exposing the seedier side of the city which we are lead to believe is for artistic purposes while at the same time he shows no qualms about putting himself in harms way when he chooses to photo graph a gang on the subway. Frustratingly the background or reasons for Leon pursuing this work is never made clear so why he’s willing to take such risks much less become so obsessed with tracking down this suspected killer.

Of course seeing how this is a film being based off a short story there is of course the requirement to pad out the story which here questionably adds Leon’s girlfriend who really doesn’t add a huge amount to the film in terms of plot and really only served to bring an element of melodrama to the final act. What is confusing though is how Kitamura manages to craft a film which is clearly in need of some trimming as while the additional elements certainly don’t detract from the story the film still felt like it overstayed it welcome especially when it passed the point I felt like we should be getting some kind of resolution.

Unsurprisingly for Kitamura and the fact this is based on a Clive Barker text the film is gratuitously bloody which can in some scenes work such as one potential victim attempting to craw across the blood drenched floor while other seem like bad 3D effects which made me wonder if this film has ever been scheduled for any kind of 3D release. Still there is still some inventive violence on show here as skulls are clubbed with a meat hammer and crimson sprays across the carriages. The highlight being when we get to see the nights quota of victims strung up like a human abattoir.
kit
Outside of the gore which is the arguably the obvious draw here Kitamura also brings his underrated eye for detail in his settings as he bring a real feeling of sleaze to the subways, while a cat and mouse style chase through an abattoir bringing a real menace to Jones character as he stares down a corridor of carcasses. All of which rises it about the predicted disposable horror that the film is sold as, something also not helped by its throwaway distribution by the studio.

A frustrating film at time as it diverges from being an effective thriller to tedium but when it works it is an effective film but far from what fans of Kitamura have come to expect from the director who here feels at times like he's had his wings clipped.
Posted by Elwood Jones at 13:13 No comments:

Urotsukidoji: Legend of the Overfiend 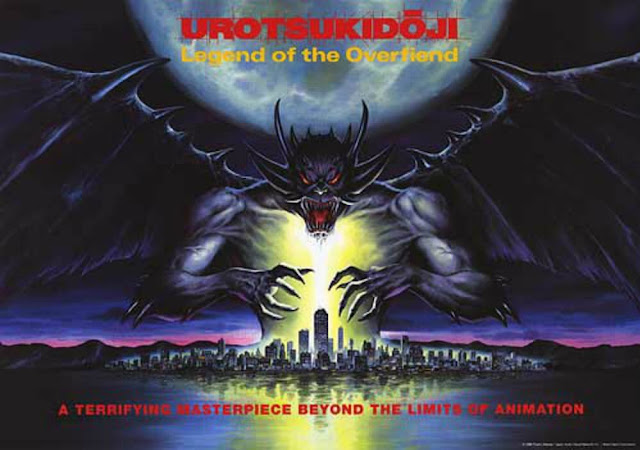 Review: Reknown as one of the landmark titles of adult animation, this notorious anime adapted from Toshio Maeda’s manga has continued to shock each new generation of anime fan who no doubt were directed to it by the previous generation. Of course when it was released in 1989 it served in many ways to taint the impression the general public had about anime while the hysteria lead by newspapers such as The Daily Mail began leading a public outcry to “Ban this sick filth”.
Of course looking at the film its easy to understand why audience were so shocked when this title was released especially when there was nothing else really like anime with the genre’s seemingly carefree attitude its gratuitous sex and violence with the closest we had come to such material in the west being the sporadic adult animated title such as Heavy Metal or the films of Ralph Bakshi. Infact so uneducated were audiences at the time especially with there being no internet to refer to, anime was often refered to as Japanimation or Manga which was certainly the case in the UK thanks to majority of titles being put out by Manga entertainment.

Because of Urotsukidoji’s notorious legacy for myself it was always a title I avoided much like many of the demon based titles, largely due to the feeling of watching something you really shouldn’t especially with popular titles of the era such as Violence Jack, Wicked City and Genocyber which seemed to relish the levels of sex and violence with thie popularity of these titles in many ways influenced the titles being available when I started getting into Anime in the late 90’s were the focus was often on more adventure, sci-fi and horror based titles than the staggering range that anime fans now have available to them. At the same time with most anime being only accessible via VHS releases / tape trading it limited further what you could watch with the cost of these tapes often making you more cautious about not wanting to be lumped with a tape you couldn’t pass on. Still with the aim of trying to cross off the list those anime titles for one reason or another I’d missed I finally decided to bite the bullet and watch it.

Originally released as a series of three OVA’s (Original Video Animation) which were edited down into this theatrical version for western audiences at the same time cutting around 40 mins of gratuitous sex and violence, something that many fans / anime sweaties are often quick to gripe about despite there still being plenty of nudity, gratuitous violence and demons befiling humans left in the film and taking a look at the cuts list its nothing that I personally can’t live without but of course if your the sort of anime fan who wants to see such things and have the extra bucks to pay trader prices you can hunt down the uncut version released in the Perfect collection via Anime 18.

The film meanwhile see’s the Earth realm as one of three interconnected dimensions alongside the demon dimension of the Makai and the more ethereal realm of the beast people known as the Jujinkai which our antihero Amano and his sister Megumi belong to. The pair have spent the last 300 years looking for the Chojin (or Overfiend) who according to legend rises every 3000 years to bring the three realms together in harmony. However despite the seemingly straightforward plot this is a film heavy in random sub-plots and schemes being carried out by various members of the demon realm whose encounters with humans usually end in splatter heavy violence and more worryingly rape, something the film certainly takes a shockingly lax approach to compared to the west.

Amano and Megumi’s mission soon leads them to encounter the shy clutz and occasional peeping Tom, Negumo who has fallen for the popular cheerleader Akemi and following a series of situations which unquestionably make for awkward viewing the pair end up forming an unlikely couple which is of course only complicated further when Negumo is revealed to be the Chojin that Amano and Meguimi have been hunting for. A reveal which in one of the more memorable moments sees him taking on his gigantic demon form in a transformation sequence which sees a trio of penis tentacles tearing through a hospital. The plot at times can feel confusing and distracted which many fans blame on the cuts while for myself it was mainly because of its desire to constantly work in those graphic moments which see the film diverting off course to add another thrill but when it works its still an interesting plot with some fun twists along the way, especially as the prophecy might play out the way that Amano expects.