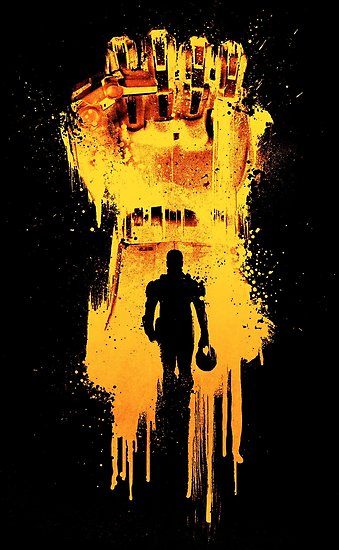 Plot: Ten years after the events of the first film, society has begun to rebuild itself believing that the Kaiju threat has long been defeated. Jake (Boyega) the son of the now legendary Stacker Pentecost and now a disgraced former Jaeger pilot makes a living selling Jaeger parts on the black market only for a chance encounter with Jaeger enthusiast Amara (Spaeny) to see them both being drafted into the PPDC as the threat of the Precursors and their Kaiju creations threatens the world once more.

Review: Pacific Rim Uprising was unquestionably a film I was looking forward to, even if my general lack of desire to pay for overpriced cinema tickets has meant that it's taken me until now to actually watch it. Needless to say with Del Toro not returning for this sequel there was certainly an element of doubt if it could love up to his original love letter to the Kaiju genre and for the most part I feel that Steven S. DeKnight's follow up continues to build upon the world Del Toro had established. In the years which have passed the Pan Pacific Defence Corps have once more become recognised as the key defence and as such no longer the rag tag band of pilots scrabbling for resources through black market deals for Kaiju parts.

At the same time it should be noted that this is a much more busy and louder film as DeKnight revels in the chaos and destruction compared to the Del Toro pacifist approach which focused more on the battle between giant robot and monster than potential collateral damage. Now while both movies certainly provided the same buzz and excitement from these scenes I wanted as a life long Kaiju fan there is an unquestionable feeling that the DeKnight's is lacking something.

Plotwise there is a real mish-mash of ideas at play and while seeing the PPDC turned into a heavily funded war machine is a welcome evolution for the series even if one potentially set to be made obsolete by a new drone program. At the same time Jake the son of rousing speech maker and leader Stacker take on the hero duties this time as he finds himself drawn back into the fold as the Precursors launch their latest offensive which sees the film working more of the enemy within angle which ties it nicely to the original film aswell leading to a more meaty role for one of the few characters who make their return when their betrayal is inevitably revealed. The rest of the film though is this weird mix of Kaiju fun with an undeniable and unneeded and not mention unwanted Top Gun vibe as Jake and his former co-pilot Nate (Eastwood) play out a Maverick / Ice Man dick swinging contest which would have honestly worked better if they were rival pilots ultimately forced to team up than co-pilots from the start. Throw into the mix an unresolved love triangle and it just feels like it's padding out the run time.

One of my initial concerns regarded how both Jaegers and Kaiju were shown in the trailers, which honestly left things looking like a reskinned Transformers movie, here the camera work is just as impressive as the first film even if the action is alot more hectic than the lumbering intense battles of the first film. It's just a shame that the film suffers from some truly horrible sound design which only serves to cheapen and detract from the film as radio mics crackle and weapons would sound more impressive if you just made your won Pew Pew sounds. Thankfully the action sequences are still fun to look at with plenty of Jaeger tech being showcased here and sure while no one might be using a cargo ship as a makeshift bat the new set of Jaegers all come with their own fun toys to battle not only the Kaiju monsters this time but also the new drones which perhaps might feel alittle too close to the aforementioned transformers, but thankfully it’s given enough of a spin to work.

While Del Toro's absence is certainly noticeable here, it's still a fun (if flawed) experience that I enjoyed my time with, while DeKnight's own additions to the series like the mini Jaeger "Scrapper" and the rival Shao Corporation only help to make this a fuller and more exciting world which I hope that they continue to explore with further films.

Posted by Elwood Jones at 13:13 No comments: 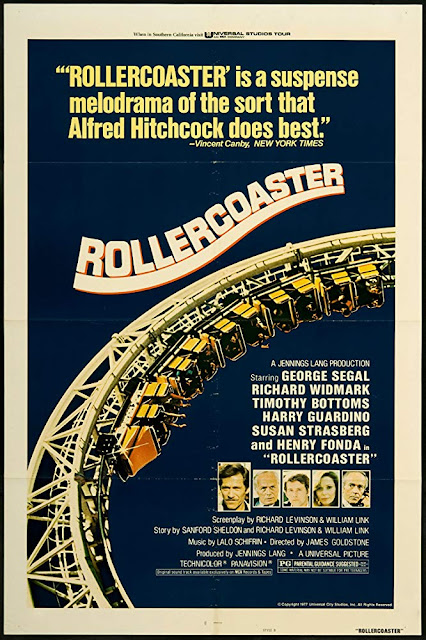 Plot: When a bomber (Bottoms) plants a device on the tracks of a rollercoaster causing it to derail, it soon becomes a deadly game of cat and mouse as Safety Inspector Harry (Segal) attempts to stop him before he strikes again.

Review: A film probably best known for its rather spectacular opening roller coaster crash than the film the footage was taken from this would be one of the few feature films that director James Goldstone directed spending most of his career directing TV Pilots for Ironside and the original Star Trek were his work was not only noted for its momentum but also the “fifteen-minute cliffhangers” he brought to them. A film equally noteworthy for being one of the four films which Universal presented in “Sensurround” were selected theatres were low-frequency bass speakers were used to create vibrations at key moments, which ultimately proved to be so successful that it cracked the plaster of some of the theatres which choose to use it.

Despite the impressive opening crash this is surprisingly a much more subtle film than I was expecting as Goldstone instead here chooses to craft a tense thriller with the rest of the film plays off the tension of not knowing were the bomber has hidden his next device let alone the mind games between Timothy Bottoms unnamed bomber and George Segal’s Safety inspector Harry. Bottoms however was criticised for being too boring as a villain in reviews for the film when it was originally released but here he gives a performance reminisant of Kevin Spacey’s John Doe in Seven which here really works for the film, especially when he is spending the majority of the film taunting Harry over the phone or a walkie talkie, all the time knowing that he holds the power in this situation with Harry left to play the unwilling puppet in the proceedings.

Segal meanwhile is an engaging leading man as the frustrated safety inspector he works in humorous subtle digs at his incompitant bosses while also having to work with the local police chief and Richard Widmark’s tough FBI agent. While it might seem that his talents are perhaps alittle wasted here seeing how he spends most of the film talking to the Bomber over the walkie talkie while moving through a variety of amusement rides which for theme park fans provides its own enjoyment with the film being shot on location at Ocean View Park, Kings Dominion and Six Flags.

The Cinematography throughout is extremely impressive especially with the rollercoaster footage were large portions are shot from the front of the carriage creating that simulator feel of being on the ride which is a nice touch especially when Goldstone isn’t planning on giving the audience any more crashes. The fact that they are shot from so many angles including some impressive profile shots is really add to the excitement, especially during the finale were the cat and mouse games are played out on the opening of the six flags Revolution the world’s first coaster to use a clothoid-shaped vertical loop and more fun against the backdrop of a Sparks concert a gig which had rumoured to had been offered to both the Bay City Rollers and KISS the later turning it down in favour of doing KISS Meet The Phantom of the Park. Sparks would later recall doing the film as one of the worst things they have ever done which I had to wonder if this was before or after they did their 2006’s album Hello Young Lovers. Despite what they feel about it, the high energy performance here really play well against the tension of this final game between the bomber and police.

While it might initially be a little disappointing to see what seems to be setup as another disaster movie dissolve into a thriller it ultimately proves to be the right move here, especially with Segal’s performance certainly able to carry the film so that such shocks are never required even though the film had originally been planned to be a lot more gruesome with both the opening crash and how the bomber ultimately meets his demise, a plaque for which can still be found on the rollercoaster at Six Flags. While perhaps not a film that rewards repeat viewing it’s one still worth checking out especially for the opening crash as you wonder just how they pulled it off.
Posted by Elwood Jones at 22:58 No comments: