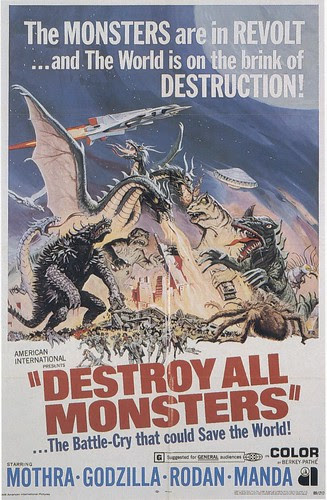 Welcome to the first entry in a new feature here on the blog, were I will be looking at the movies, which I consider to be essential. True I could have just done a list of my favourite movies, but rather than face being lumped with a list of movies, which would shadow me forever along with the fact, I could see it getting real depressing kind of quick, committing to a series of posts gushing over my favourite movies, in much the same way that you tend to get bummed out super quick, when you try to make a mixtape of just pop songs.
So what with us currently being the midst of "Kaiju season" here on the blog, what better place to begin this new feature, than with what I believe is one of the best entries in the Godzilla series. Still choosing just one of the 28 movies is no easy choice, especially when so many films in the series could easily (and still could) have been included on my list of essential films, but if forced to choose just one it would have to be “Destroy all Monsters” (1968) which I would deem to be the most essential one to watch.

“Destroy all Monsters” or “Attack of the Marching Monsters” as it was known in Japan, is the ninth entry in the Godzilla series, which at this point had truely established it’s format of giving audiences monster sized smack downs, with antihero Godzilla reigning supreme as the earths best defence against the various monsters which were eager to destroy human life or more specifically Tokyo. However the series was struggling upon the release of this title, which was originally intended to wrap up the series, with the studio bosses at Toho seeing it as a good way to send the series off with a bang, only to produce one of the most popular films of the Showa series and in turn helping to keep the series going for a further nineteen movies.

Plot wise the film sticks to the popular craze of space travel and alien invasion, which would prove to be popular themes throughout the Showa series and here it is no different, especially with the hero of this particular film being Captain Yamabe (Akira Kubo) and the crew of his spaceship Moonlight SY-3, which despite being a spaceship, is still more than capable of flying around normally in the Earths atmosphere.
Set in 1999 all the Earth’s monsters have been rounded up (though we are never explained how) and placed on an island which has been funnily enough re-named “Monsterland” however the island is covered in a mysterious fog, causing the monsters and the staff of “Monster Island” to disappear, only to reappear under the control of a race of mind controlling aliens called the Kilaaks, who are intent on destroying all human life using the giant monster they now have under their control.

One of the main selling points of this particular entry in the series, especially when I first saw, is the sheer amount of monsters which have been crammed into this single film, with Godzilla being joined by Mothra, Rodan, Angilas (my personal favourite), Kumonga, aswell as Minilla who still looks like he is made out of grey lumpy mash.
Still several of the monster who make appearances here, were never actually part of the Godzilla series and drafted in to make up the numbers, such as Baragon (Frankenstein Conquers the World (1965), Gorosaurus (King Kong Escapes (1967), Manda (Atragon (1963) and Varan (Varan the Unbelievable (1958) which despite this, still don’t seem out of place though it was a relief not to see that horrible King Kong costume from “King Kong Vs. Godzilla” (1962). This was feat certainly not seen again until the final film in the series “Godzilla: Final Wars” (2004) which also brought out monsters from the Toho back catalogue. The true highlight of this film though has to be the final monster rumble which sees the collected monsters teaming up to fight King Ghidorah, in a fight which has over years proven to be a sore point for some fans, especially seeing how overwhelmed Ghidorah becomes, but it is still a stand out Kaiju moment and makes for a fantastic climax to the film.

The miniature work is great here, with the military hardware and crumbling cities never looking better, especially with some great blue screen work only further helping to bring them to life further, much like the attention to detail which shows footage of people running to underground bunkers during the monsters attack on Tokyo, which kind of emphasises how used to giant monsters destroying the city the people of Tokyo are.

Despite the success of this film, it would sadly be the last film to be made with all four of the Godzilla fathers producer Tomoyuki Tanaka, Director Ishirô Honda, Special effects genius Eiji Tsuburaya and Akira Ifukube providing the rousing classical score, including the trademark “Godzilla March” which even now is still just as thrilling to hear, even after numerous viewings. Still it would prove a fitting end note for their career together, even though they would each work on further entries in the series, this would be the last time they worked together, with this film providing a suitable endnote for their collaboration in the series.

“Destroy all monsters” might look a little dated with its use of miniatures and lack of CGI, while for the Kaiju fans it might just be their cinematic wet dream, especially with the sheer amount of monsters on screen, with a storyline which isn’t just an excuse to have a bunch of monsters stomping on Tokyo, which several of the earlier films may have felt like, but out of those early movies, this film is a definite high point, if not for the series as a whole.
Posted by Elwood Jones at 09:13