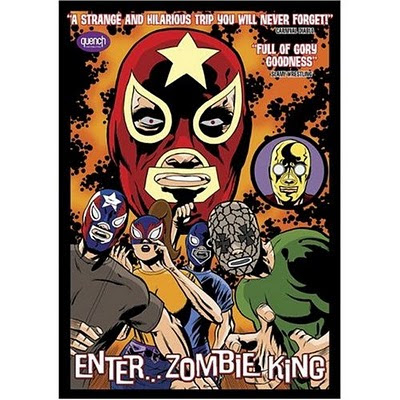 Plot: Ulysses (Delorme), Mr. X (Robb), the Blue Saint (Carle) and his sister Mercedes (Clarke) a group of masked wrestlers on a mission to find out who is responsible for unleashing killer zombies on the local community, who it seems could be linked to the evil (and fellow masked wrestler) The Zombie King (Sinn)

Review: Since getting Sky+ installed, I have in a short time managed to fill the hard drive of the box, with a varied wasteland of old Buffy episodes, Anthony Bourdain Travel documentaries and a variety of late night movies, which vary from films by the genre masters like Fulci to more obscure and certainly random movies like this one, which like so many of these films I tape in the early hours of the morning, only had the briefest of synopsis mentioning wrestlers and zombies, which is pretty much all it really needed to get my interest, though this really doesn’t even scrape the random surface of this film, which is not only a beautifully weird mix of zombies and wrestling, but also throws in random characters, lesbians, gratuitous nudity, surf rock and a healthy dose of gore to boot and somehow manages to make it all work!

Right from the start it’s clear wether your going to like this movie or not, as not only is it shot on cheaper film stock, than your usual mainstream movie, somthing which is usually enough to deter the more snobbish movie goer, but your also introduced to our supposed hero Ulysses who is not only a Santos imitator, but also providing a running deadpan narration throughout the film, while occasionally spouting random philosophy quotes in what it can only be imagined is an attempt, to make him seem deeper than your usual masked wrestling crime fighter. Still for his flaws at least you have a whole bunch of masked wrestlers to take your pick off and seeing how Ulysses is frequently pushed into the background until needed, with the other members of the group all getting their moment to shine, I couldn’t help but wonder if it was because I wasn’t the only one having doubts about his character, even more so when he is never actually called by this name.
The other warning sign for the less forgiving will be how truly random this world is, for not is it one were people can wonder around in Mexican wrestling masks, solving mysteries and not raise the slightest eyebrow raise, let alone the fact that trained zombies are also common place and despite everywhere being covered in snow and blowing a blizzard, it still doesn’t prevent Mercedes from heading off to the beach in a skimpy bikini.

Essentially this film can be seen in the same fun terms as the Santo and Superargo films, especially as they are such a clear inspiration here and without knowledge of their camp humour or a love for wrestling in general, it can make this film hard to get into for some, especially as a zombie film alone it stands up kind of shakily which seems to have been the main disappointment for the majority of people, who have seen this film, despite the fact that Case has managed to cram in a fair amount of satisfying moments of gore, but then for most the prospect of watching a film were the zombies are supporting cast, might be hard concept to grasp especially after so many years of movies portraying them as a main threat, for Case to actually take a step back and reduce his zombie hordes, to the same form (if slightly more carnivorous) of monstrous slave labour that they were originally used as in the early zombie movies, such as “White Zombie” (1932), way before Romero turned them into their more ravenous image that the general movie going public is more familiar with. Still Case even brings a wrestling flavoured spin to the slave zombie idea, as he opens with masked wrestler Tiki using zombies in a caged wrestling match, which despite being undead still manage to prove themselves surprisingly limber and actually put on an entertaining match, with wrestling unsurprisingly proving to be a major film, with Case even casting wrestling legend Jim “The Anvil” Neidhart as the sheriff, aswell as casting wrestling trainer Rob “El Fuego” Etcheverria as Tiki and also using TNA’s Tracey Brooks (seen here as Tracey Brookshaw) for some of the more involved fight scenes in which she doubles for Mercedes, but judging my Case’s comments on IMDB it would seem his love for the sport extends beyond this film, especially as he has frequently comments that he’d “rather work with wrestler over actors anyday”.
Soundtrack wise Case has gone for a surf rock packed soundtrack, which helps the action flow and even adds to the campy fun edge, while at the same time proving a perfect accompanyment to the action, while frustratingly has proven impossible to find, after getting stuck in my head since I first heard it and makes a refreshing change from all this darn rockabilly I keep hearing getting churned, while this soundtrack also makes a change from the usual tone deaf underground bands, which usually soundtrack these indie features.

This film is so hard to justify without watching it for yourself, especially as it’s horror moments aren’t exactly scary and some of the humour misses it’s mark, yet somehow it manages to pull everything together into a slightly surreal but highly entertaining ride and if you can just watch it for plain entertainment value, without feeling the urge to be critical over every single frame of film, there is definatly a lot to enjoy, especially for the established Santo and Superargo fans, who will no doubt get a kick out of seeing a new movie picking up were those films left off, while it also attempts to do something other than the basic horde movie, which it seems the majority of zombie films have become as of late and at least it’s bothering to try something new, when so much in the genre seems like it is just going over well trodden ground, so if you want something mindless and fun and your feeling open minded, especially if you thought that “The Calamari Wrestler” looked like fun, this might just be it’s perfect partner for a truly insane double feature.
Posted by Elwood Jones at 01:33