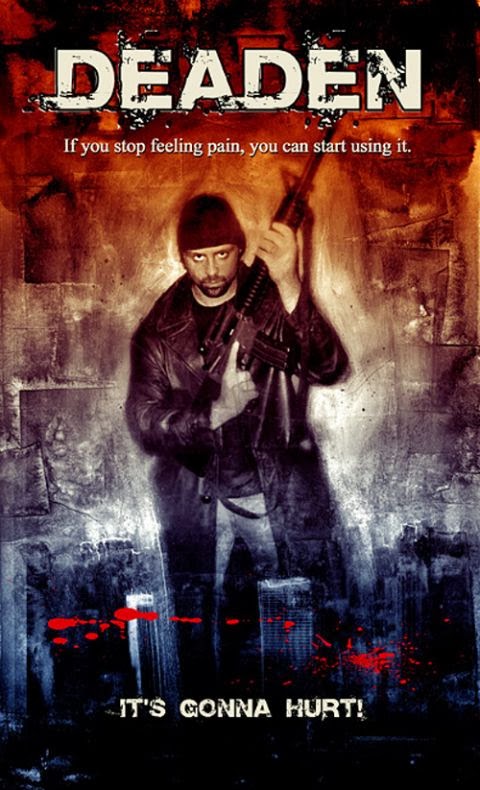 
Plot: Rane (Fallon) an undercover cop is exposed by the gang he was infiltrating, who proceed to rape and murder his pregnant wife and despite shooting Rane in the head with a crossbow and dumping his body in the river, he somehow survives. Now jacked up on painkillers and cocaine he sets out to wreak bloody revenge.


Review: It’s always interesting when a critic decides to step up and thrown his hat into his own personal critic arena, which is something the majority of critics will avoid doing, after all in this trade it is frequently noted that you are either the hunted or the hunter, despite some critics feeling that you can actually carve a career switching between the two (yes Perez Hilton I’m looking at you) and to an extent John Fallon, or as he is better known in the critic circles as “The Arrow”, has managed to pull a double life as both an actor and critic, with his critical work expanding upon his love affair with horror, with his Horror review site “Arrow in the Head”, part of Joblo.com which is arguably one of the true movie review site pioneers. Still having cranked out at the time of writing a staggering 1074 reviews since 2000, he has still found time to pull the occasional cameo appearance in the genre, with for myself the most noticeable being as a techie in “Saw 2” (2005), so I was kind of interested to see if he could pull off a leading role, as well as seeing how his writing chops would transfer to screen writing, after all would being a horror junkie really help to create a stronger film, especially having spent so long noting the flaws in the work of others, it would give him an advantage when it came to writing his own film ….. Sadly not it would seem.

Now I can look past a lot when it comes to indie features, such as the cheaper film stock and frequent cheesy performances, after all these films are usually provide a start for numerous actors and directors before they more onto bigger and more mainstream projects and most of the time they still have that base level of entertainment to be gained from a casual viewing, but even being a fan of “The Arrow” I still found this a really tough film to sit through.
Wasting no time establishing things such as characters or plotting, by opening up with Rane in a strip club shooting himself in the head (hmmm perhaps that was a subtle hint of what I should be doing), before leaping into a full blown rape and torture scene, which seemed like so many moments in this film seems to be more about shock tactics than anything that could be considered solid film making and it's almost as if Fallon and Viel are trying to top anything the audience may have seen before, but even when Rane begins extracting his revenge on the gang, the kills come off more mean spirited than the fun gooey times you want from a revenge flick, which I had to place largely with the character of Rane, who comes of more like a jerk than anything resembling a likable character, as he mopes about drinking, chomping down pain killers and snorting drugs to control his constant pain, which a crossbow bolt (yep these gangsters like to go real old school with thier weapon choices) to the head kinda leaves you with and generally trying to come off dark and moody, though for the most part generally failing horribly and these flaws are really all the more worrying when this is the guy we are supposed to be rooting for, but then its hard to decide if his character feels so because of Fallons acting ability or that his character is so darn under developed, that it’s hard to feel much for him or his plight, seeing how the only scenes we see are either him killing someone or having flashbacks of his wife, which for some reason are all romance or sex scenes, which is okay for one or two and perhaps for anyone interesting in seeing Fallons ass, but not when its for every single flashback!

The majority of the performances here are largely forgettable, which for anyone familiar with these b grade type movies, won’t be overly surprising with the majority of characters barely distinguishable as being one of the main bad guys from the stock disposable henchmen, unless they are verging on comical with their evilness. This point in perticular was especially highlighted when it came to the final showdown with head baddie Ballsy (Benzina), which almost felt like a added scene rather than a climatic showdown, though it does manage a pretty humorous finish. Still to break up these scenes of disposable baddies reciving Rane's special kind of punishment, we do also get Kersey (Richards), the cocaine snorting best friend who handily also has a huge stockpile of guns, which is not make him a good friend to have when your on a mission of revenge, but also when director Viel decides to give us his budget take on the “Scarface” (1983) finale, which is honestly just plain laughable, even more so when after hearing Kersey remark about two SWAT teams breaking into his shop, only for the so called teams to end up consisting of a grand total of six cops, two of which looking like they have gone for a coffee break rather than anything resembling tactical procedure. Still this scene like so many other scenes here, have such familiarity which considering the knowledge that Fallon has of the genre is unsurprising to find these kinds of references and while Tarantino might have carved a career out of being a cinematic magpie, Fallon lacks the writing ability to combine those moments with his own outside of some original kills he has created, which are pretty much the sole strong point and generally leaves the film looking like badly put together scrapbook of ideas which rarely engages the viewer beyond perhaps providing the occasional cheap and grimy thrill.


Sadly this isn't the breakout film for Fallon even as a writer or an actor, even though the more hardcore fanbase will no doubt argue differently, but this film is mean spirited for it's own good and struggles even more thanks to it's characters being so unlikable and when you realise that "The Crow" (1994) told pretty much the same story, except better it leaves little reason to bother with this film, outside of perhaps curiosity about Fallon's work outside of his work over at Joblo's.
Posted by Elwood Jones at 14:21