B Is For Brotherhood: Taegukgi 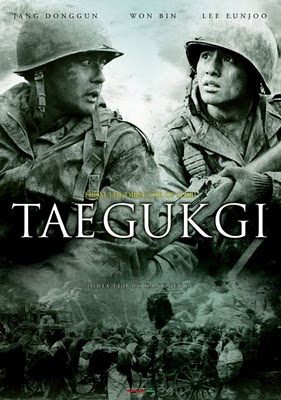 Plot: In 1950's South Korea, shoe-shiner Jin-tae Lee (Don-gun Jang) and his 18-year-old old student brother Jin-seok Lee (Bin Won), live with their mother, Jin-tae's fiancé Young-shin Kim, and his young sisters. Jin-tae and his mother sacrifice themselves working long hours to send Jin-seok to the university, but when North Korea invades the South the family are forced to escape to a relative's house in the country. Through this journey Jin-seok is forced to join the army, while Jin-tae also enlists wanting to protect his young brother. After discovering that if he is awarded a medal of honour that, he can arrange for the release of his brother, though as the war continues the relationship between the two brothers begins to deteriorate, as Jin-tae only becomes more driven towards wining his brother’s freedom.

Review: It seems that nearly every major conflict has that one film, which isn’t just a boys own adventure or a political statement, but instead has been made so that we might have an idea, what those involved actually went through. World War 2 has Spielberg’s “Saving Private Ryan”, Vietnam has Oliver Stone’s “Platoon” and the Korean war thankfully has this film, which I have frequently referred to in the past when recommending it as being the Korean Saving Private Ryan, though even with this clumsy tag, it still doesn’t feel like I am truly doing this film justice, especially when you consider it is one of the most expensive movies made by a Korean Studio, despite the fact it’s 12.8 million dollar budgets pales in comparison to what is typically spent in the Hollywood Studio system, yet to spend this much on a film was unheard of at the time of the films original release and the sole reason it was financed, was thanks largely to the success of Kang’s previous film “Shiri” (1999) which was also the first of the big budget Korean productions, while also proving at the same time that Kang was a director capable of holding his own against some of the bigger names in the Hollywood studio system, especially when given a significant budget to aid him, while this film only furthers his reputation as director, though sadly the gap between this film and any new project has been a painfully long wait, with only the currently in development “My Way” being his only recent activity.

Still it’s hard not to compare this film to “Saving Private Ryan” especially when they have such similar openings with the elderly former solider visiting a memorial site, though Kang at least gives us a chance to get to know the brothers before throwing us straight into the conflict, unlike Spielberg’s memorable dive straight into the D-Day landings. Infact “Brotherhood” is a lot more subtle on this front, saving the true horrors of the trench warfare and claustrophobic cityscapes that the battles are waged in, until the brothers are unwilling drafted and it’s from this moment that we rarely given a break from the dirty and frequently under equipped conditions of the front line, as he builds up to the epic conclusion, which for myself truly captured the blood and snot style of combat which, made up the majority of battles fought in this war, giving the viewer a true sense of what it must have been like to have fought in such wrenched conditions, as countrymen from the north and south of Korea were forced to fight each other in a war based purely on political beliefs.

Like Spielberg and Stone, Kang is not afraid to show the truly horrific side of war, as limbs are frequently blown off in explosions of dirt and mud, as soldiers encounter ambushes and booby traps, leaving you with the impression that any character could die at anytime, while scenes in a field hospital prove especially chilling, when the incompetence of the field medics leaving one wounded solider with a festering, maggot covered stomach wound.
Still the power of these scenes are not cheapened by the soundtrack which despite the film having a fantastic classical score, only adds to key scenes and never becomes threatening enough to overpower the images being shown and giving the audience cues for what they should be feeling at that exact moment, with Kang preferring to let the drama tell the story and leave the audience to their own emotions and it’s a technique used to devastating effect here.
However the trump card Kang has here is clearly with Dong-gun Jang, whose performance here is highly reminisant of the early films of Chow Yun-fat, especially with the levels of charisma and confidence he brings to the role, while truly helping to sell the father like role Jin-tae has taken upon himself, going far beyond being a protective brother, as he is shown being willing to do anything, to ensure that his brother can reach his full potential, all the more clearly shown as he signs up for increasingly suicidal missions, seeking the medal of honour so that he might get his brother off the frontline, even though he has no love for any aspect of the war going on around him. Still I’m sure that if it wasn’t thanks to Jang’s performance here, the film would have none of its emotional power, let alone the believability of the relationship between the two brothers, even as it deteriorates under the battlefield pressures, especially as their own personal beliefs comes constantly under attack, by the things they witness and such is the emotional power of this film, which Kang has managed to capture here, by the time the credits have rolled only the most stony hearted will fail to find themselves moved by what they have just watched.
"Brotherhood: Taegukgi" is a powerful and important film, not only in the respect of Korean cinema but war films on a whole, as it not only gives the viewer a true insight into the harsh realities of war, but also looks at how it changes those involved. In many ways I would place this in a higher respect than "Saving Private Ryan" even though both set out to create a similar viewing experience, but for those of you who like your War films with more of a human element I'd strongly recommend this film.
Posted by Elwood Jones at 00:45