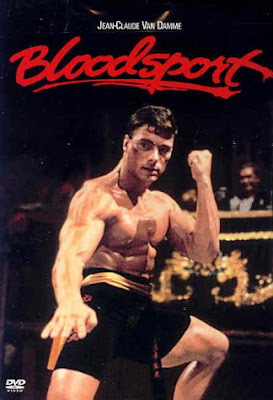 Plot: Frank Dux (Van Damme) has spent his life being training by his adopted father figure Tanaka, to compete in the Kumite, the ultimate and highly illegal underground martial arts competition were serious and injury are common place, while the current champion Chong Li (Yeung) is equally keen to retain his title at any cost.

Review: “Bloodsport” is a true nostalgic relic from the golden age of action movies which was the 80’s, with the film also providing the much needed showcase for the Kickboxing talents of Van Damme, which in turn launched him to superstar status and while his more recent efforts might be more forgettable like so many of the era’s action stars, it still remains one of his most talked about movies. So after being frequently reminded of it, while checking out “The Jaded Viewer” who has replaced the more traditional stars / thumbs up rating for one of the more iconic screenshots from this film, which honestly is a lot cooler, I thought I'd finally sit down and watch it.

Opening with the various fighters going through their assorted training regimes, Director Arnold wastes little time in setting the mood for what sort of movie your gonna be watching, with the true highlight of this sequence including the weird Zulu warrior punching coconuts while generally leaping around like a frenzied chimp, which does have me questioning how some of these fighters like this joker in particular even know about the tournament. Still the most badass fighter of all of them Chong Li, gets the best of these first introductions, as we are treated to the sight of him breaking blocks of ice with only the utmost ease. Essentially this is what the film is about. Fighters showing off their skills and beating the hell out of each other, with the plot only being something to string these assorted showcase pieces together.

Supposedly based on the real life of Martial Artist Frank Dux, who also wrote the original story which the film is based on, but seeing how the validity of many of his personal claims have frequently been disputed by both “Soldier of Fortune” and the “Los Angeles Times” feel free to believe what you want when it comes to credibility, as personally I seriously doubted the "based on real events" tagline and just thought it was just fun, rather than any kind of biopic. Still What struck me first about this film was just how young Van Damme looks here, as the fresh faced Frank, which was also his first leading role and despite not being the most convincing actor (well I guess something just never change) he allow his skills instead to do most of the talking, finding time to include his now trademark moves while relying on raw charisma for the rest to help carry him through. This film also established the trend with his early films for the training montages to usually involve torturing him as part of the part to being the ultimate fighter with the rack making the first of its memorable appearances, during a stupidly long flashback sequence, which frequently cuts to a close up of Franks eyes whenever the scene changes.

The fight scenes are all pretty fantastic even when none of the named fighters are competing, with the tournament attracting a wide range of fighting styles which only helps keep things interesting, from the kickboxing style of Frank to the more powerhouse style of Chong Li, who is perfectly written for Yeung who here, despite being 50 at the time of filming, looks absolutely monstrous and more bulked up then usual, though the script writers clearly doubted him being able to pull of the English dialogue, which might go a way to explaining why Chong Li only rarely speaks and when he does it’s usually to say something badass like

Still like Van Damme, Yeung also lets his actions do a lot of the talking, as he demolishes all those who challenge him, frequently (and graphically) breaking bones and generally providing the deaths which the tournaments’ reputation promises, which judging by the unfazed reaction of the crowd, would seem usually happens a lot more frequently than it does with this tournament, with most of the fighters preferring bizarrely enough an honourable defeat over a more permanent one.

Outside of the fighting which honestly is most of the movie, we get the aforementioned attempts at plotting which pretty much boil down to the half assed attempts of the Military Police Officers Helmer (Burton) and Rawlins (Whitaker), who basically spend a lot of time running around and failing Frank to turn himself in having gone AWOL to compete in the tournament. The other unnecessary plot thread involves undercover journalist Janice (Ayres), who despite wanting to expose the Kumite, seems to forget about this as soon as she gets involved with Frank, with her sole obsession from that point being constantly telling Frank that he’s crazy for competiting, when perhaps she should be more worried about the Hole in the Ozone she’s creating with the sheer amount of hairspray she must be using to keep her huge hair in place, with her role as a romantic interest unneeded here, as it’s basically another excuse for Van Damme not to put on his shirt. Finally we have Ray (Gibb) the loud mouthed and brash American fighter, who is also competing in the Kumite and becomes a kind of Big Brother to Frank and is one of the few supporting characters who doesn’t feel like they are being included to fill screen time, even though Frank earns his respect by beating him on an arcade game rather than anything resembling fighting ability, which makes him a pretty easy person to impress it would seem.

“Bloodsport” is a fun piece of nostalgia of a more exciting time for action cinema and despite being a film which relies solely on it’s action sequences, it works surprisingly well, if meaning as a result that it is anything but high art, but then weren’t the best of Bruce Lee’s movies like this? Still it’s a fun movie and worth watching to see an action hero in his prime, especially as it was pretty much a downward spiral from this point onwards and the less said about “Street Fighter” the better really.