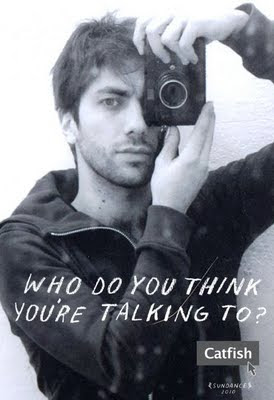 Plot: A documentary charting the quickly developing friendship through “Facebook” and continuous e-mails between photographer Nev Schulman and the child painting prodigy Abby. Soon this friendship expands to include her mother Angela and her older half sister Megan, who Nev soon begins building a romantic relationship with. However it’s not long before Nev begins to suspect that everything is not what it seems and sets out to find the truth.

Review: “Catfish” should really come with a “Google Earth and Facebook proudly sponsor” tagline on it’s poster as essentially as this feels almost like a glossy advert for both, especially seeing how extensively they are both used throughout, which is pretty much right from the start. Still “Catfish” or the other “Facebook” movie as I like to call it, is kind of a curiosity seeing how it’s limited cinema release saw it in the cinema and pretty much straight to DVD within a couple of months, were it now joins a pretty exclusive list of films, which have never been made available to rent through Blockbuster, which when you consider that they stock nearly pretty much every new release made it only all the more surprising that this one was never picked up. It’s safe to say that this lack of distribution, has only really proved detrimental to the film and meant that it’s been left for the audiences to hunt it out themselves, leaving the film relying heavily on word of mouth promotion, especially when it comes to the authenticity of the footage, which most notably had “Super Size Me” (2004) director Morgan Spurlock branding the film “The best fake documentary he had ever seen”, despite the constant protest from Directors Joost & Schulman who still maintain that everything shown in the film is real.

This documentary really comes with great timing, especially with so many people now using social networking sites like “Facebook” and generally using the internet as their connection to the rest of the world, as the film explores the frequently asked question, since the internet became such more than a nerdy obsession, of how you can really be sure that people who they say they are, after all the Internet is essentially a platform for you to become anyone you wish to be, with the minimum amount of hassle and this is at the core of what the film is about and I will attempt to keep any spoilers until the end of this review, as this is another film which works best when entered blind of with the minimum amount of information, so my advice would be to stop reading now and go see this film, unless you’d rather risk spoiling any potential surprises.

Nev’s photography mainly revolves around dance and theatre and it’s when one of his recently published photographs gets sent to him as a painting that the story begins, as he begins first of all communicating through e-mail and later “Facebook” with the child painting prodigy Abby, as they slowly build a friendship as she sends him more and more of her paintings. Soon it’s not long before he has also started speaking with her mother Angela on the phone, who soon becomes the spokeswoman for her daughter, frequently making excuses for Abby whenever Nev asks to speak to her, which for some reason he never seems to question, until later in the film when cracks start to appear in the story. In the meantime Nev also begins talking with the equally talented half sister Megan, with their friendship soon turning to romance which again Nev seems to never question until later in the film, happily reading off dirty texts sent back and forth between himself and Megan, while also making up photo-shopped pictures of them together, which did have me asking myself who essentially is the more creepy here. Still It’s only after Nev receives a song supposedly being sung by Megan that he starts questioning the whole situation further and sets out to find out the real truth behind the family and this is were the real meat of the film comes into play.

Part social commentary and part thriller the film rolls along at a steady pace, making the viewer feel that they are part of the group as each piece of the mystery is slowly revealed, the further the film pulls you into the mystery behind this supposedly talented family. However the further the film goes the easier it becomes to understand why accusations have been made to the authenticity of the footage, especially when the film crew descend on a horse farm supposedly owned by Megan only to find it eerily empty, with the choice to shoot it in a Blair Witch style certainly being questionable, meanwhile at the opposite end of things we have shots like Nev scratching his crotch in full view of the camera, while on the phone and more worryingly a prolonged open legged shot of one of one of Abby’s friends also go a way toward justifying authenticity, after all why would you choose to include scenes like that otherwise? What is clear though is that having stumbled across a more interesting story, almost by accident Directors Joost and Schulman are keen to film it through to it’s conclusion while trying to clearly playing dumb to prolong the mystery which the viewer has no doubt figured out before they choose to play thier big reveal, with this choice questionably make the film all the better as a result, especially as we discover the reasons behind this ruse are more to do with escaping a difficult and emotionally draining existence, with the true depth and plotting behind these created character proving only the more astounding especially when you consider how it was pulled off, by one person as revealed in a fantastic scene in which the real artist behind the paintings and also creator of this ruse explains it all as they sketch Nev’s portrait, an moment which almost feels like a final wish being granted aswell as a way of bringing a satisfying closure to the whole strange journey.

In all it is a strange movie to describe as what starts off as a strightforward documentary and what could have made an intresting short film, soon changes it’s focus towards internet fakery and how we choose to represent ourselves, before finally making us question if it is a good thing that we have people like this in the world, as the true meaning behind the title is finally revealed and that it’s a question which like the film I will end this with, while urging you all to hunt down this film, for what will no doubt be one of those films which sadly slips from the general conscious of the public only to be passed around the film junkie ranks were no doubt it will truly be appreciated for the intriguing documentary it is.
Posted by Elwood Jones at 13:58