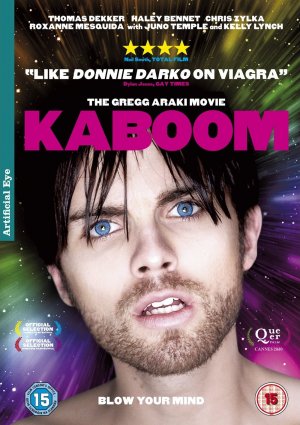 Plot: Smith (Dekker) is a laid back film student, whose day to day life of hanging out with his permanently sarcastic best friend Stella (Bennett), hooking up with the free spirited London (Temple) and lusting after his surfer roommate Thor (Zylka). However his world is thrown into chaos following a chance encounter a red haired girl (LaLiberte) he’d previously dream about.


Review: With YAM Magazine’s 2012 LGBT Blogathon now upon us what better time could there be to revisit the work of “New Queer Cinema” pioneer Greg Araki, whose work I’ve long been a fan of since stumbling upon a late night TV showing of “The Doom Generation”, which introduced me to his frequently twisted and surreal world view. Needless to say little has changed as he now arrives with his tenth film, which would also earn Araki the first ever “Queer Palm” at the 2010 Cannes Film Festival, for its contribution to lesbian, gay, bisexual and transgender issues.

Opening with the first of numerous dream sequences we see throughout, it is unsurprisingly that comparisons between this film and “Donnie Darko” have been drawn, even though the dreams seen here are much more straightforward and lacking any of the symbolism that “Donnie Darko” so memorably played around with. Still while Smith might like Donnie be a dreamer, his dreams are much obscure in their relevance, especially with their focus often on random strangers than providing any kind of path or direction. However despite receiving these dreams Smith rarely seems to be affected by them, as he happily continues his day to day life of college lectures and casual sex, while pushing his own theories of sexuality by identifying himself as “undeclared”.

In many ways this film could be seen as the spiritual follow up to “Nowhere” the last film in Araki’s “Teenage Apocalypse Trilogy” especially as Smith and his friends seem almost like unused characters from that film. At the same time the film seems like an attempt by Araki to get back to his surreal roots, especially after his previous three films “Splendor”, “Mysterious Skin” and stoner comedy “Smiley Face” being more decidedly mainstream than the films which came before it. So while it might seem on the surface like an oversexed teen drama, it is all essentially part of the illusion that Araki weaves here, as the slightly odd and surreal moments such as Smiths’ dreams to Stella possessive witch girlfriend Lorelei (Mesquida).

Shot like a Bret Easton Ellis novel as seen through the lens of David Lynch, this gradual shift in reality is really the key strength of this film, for while his other films have generally thrown the audience head first into his surreal worlds and leaving them to figure out the ins and outs of that particular world, while he continues to tweak what is really happening and what is pure fantasy, a line frequently blurred by the characters frequent drug use. “Kaboom” to this extent is a real change in pace for while the characters might be hedonistic, with their main pleasures lying mainly in casual sex and hence giving us a rare sober world view for his characters. This however doesn’t stop Araki from tweaking this perceived idea of the film being based in reality, as things only continue to get weirder as he manages to take the film from a College drama about students looking for gratification through wild partying and casual sex to a film featuring doomsday cults, animal mask wearing strangers and a witch who really doesn’t take rejection well! All ideas that the established fanbase will no doubt lap up, while no doubt blowing the minds of the uninitiated as they try to make sense of exactly what they are watching.

It’s this style of storytelling though which draws the most negative criticism for the shift to it’s surreal finale, feels less of a smooth progression than his earlier films and could almost be seen as Araki no knowing were to take his established plot line of lust driven students and the thriller plot points and instead chooses to just thrown as much random plot ideas as he can at the screen with often only the characters sudden acceptance of their existence being their only grounding for existing within the film, while at the same time the random plot ideas are not so much tied up, but bundled together and thrown into the finale. At the same time though the film almost appears to be self aware of its frequent absurdity and even seems to make a joke of it with these final moments which had me questioning whether Araki ever really had an ending in mind or if this whole film was just an experiment in style?

The soundtrack is once again heavy with shoegaze and hip electro, making Placebo's "The Bitter End" being given a suprisingly prominent showcase the finale an interesting change of pace. Though like the cast it feels drenched in hip style, as Araki once again sets out to define his own brand of cool rather than just using flavor of the week bands for the soundtrack, which contains enough interesting noises and sounds to soundtrack scenes, but never to the point were it is being used to define what the audience should be feeling at any given moment.

Weird, strange yet still bizarrely enjoyable like the best of Araki’s films and its fun to see him playing around with his enfant terrible style which made him so memorable to begin with, so perhaps it is best to not question what you’re watching and just enjoy the ride.
Posted by Elwood Jones at 15:34