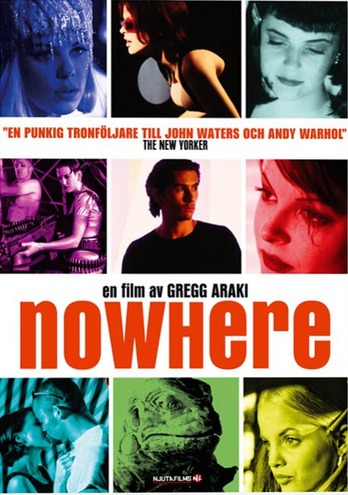 Plot: Following a group of LA teens over the course of 24 hours. A day made up of a volatile cocktail of sex, drugs, suicide, bizarre deaths and alien abduction.


Review: There are certain films which throw down a gauntlet to its audience from their opening scenes, with prime examples of this being the fire extinguisher bludgeoning in “Irreversible” or Pumpkin and Honey Bunny in “Pulp Fiction” which almost seem challenge the audience to watch past this point, while often giving them a good idea of what is in store should they choose to stick around. “Nowhere” is another of these films as we open to Dark (Duval) jacking off in the shower to fantasies of his bisexual, polyamorous girlfriend Mel (True) aswell as his shy classmate Montgomery (Bexton)….ladies and gentlemen welcome once more to the world of Gregg Araki!

The final film in his “Teenage Apocalypse Trilogy” which started with the colorfully named “Totally Fucked Up” and followed by “The Doom Generation” now ends with this film which seemingly sets out to top everything which came before it. While it has frequently being described as “Beverly Hills 90210 On Acid”  for myself it feels closer to Bret Easton Ellis’s “Less Than Zero” given a David Lynch twist, a book whose own film version seemed almost like a different book altogether and minus any of the frequently nightmarish imagery that Ellis’s debut novel so proudly contained. Needless to say Araki has truly captured that anarchic spirit here to create an alternative vision of LA, were teens care for little outside of the pursuit of casual sex and drug taking and were the sole focus is seemingly on making to Jujyfruit’s (Haynes) party.

Split into eight interweaving stories, the film constantly switches between plotlines with the main of these plots revolving around Dark, a film student who constantly films everything happening around him and living under the belief that the world could end at any moment. Meanwhile his only other concern seems to be with getting laid, be it with his latest crush the shy and retiring Montgomery or his supposed girlfriend seems more concerned with sleeping with anything that moves, in particular Lucifer (Robertson) whose acid tongue is the cause of much anguish for Dark. The other plots meanwhile vary in their integral nature to the plot from the naïve Egg (Lassez) and her inadvertent meeting with “The Teen Idol” (Simmons) and Cowboy’s (Díaz) relationship issues with his drug addicted boyfriend Bart (Jordan). Meanwhile other plotlines such Nihilistic couple Shad (Phillippe) and Lilith (Graham) or Mel’s younger brother Zero (Mayweather) and his girlfriend Zoe’s (Suvari) attempts to find the secret location of Jujyfruit’s party are less integral and serve more as a distraction mainly from Dark and his various issues.

Once more Araki refrains from portraying these storylines in any form of normality, as he randomly switches between the plots seemingly on a whim, while inserting surreal offshoots like the random alien abductions and Bart’s twisted S&M session to ensure that the viewer is kept in a states of almost permanent confusion as to what they are watching and leading me for many years after my first viewing of this film, to describe it as a film which makes a lot more sense when your drunk! This art house style of filming is also carried over into the art direction with nearly every frame of this film appears to have been shot with the maximum amount of artistic freedom with sets often appearing like art installations as especially seen in the bedrooms of Bart and Egg, while saving the blow out for Jujyfruit’s party which in places almost seems like a tribute to Michael Alig’s “Club Kids”. Having seen the course of Araki’s career following this film, in many ways this film now feels like a last hurrah for his surreal roots before he moved onto more mainstream projects, before returning to this style of film making with “Kaboom”. Still the downside of this vision is that while it might look very pretty on the surface, it does seem ultimately hollow beneath especially when it can at times seem like a constant stream of casual sex and drug taking. Still with this film he has created a vision of LA seemingly on the brink of its final days as frenzied televangelists (Ritter) urge the masses to repent their sins, while random graffiti screams out slogans like “God Help Me” and "Repent Now" as these teens live only for the most primal pleasures, with consequences of their actions rarely being given more than a passing though.

While the drugs and sex might seem like all the film has to offer, like a softer version of Larry Clarke’s “Kids”, Araki has also brought a vein of pitch black humour to the film with moments such as Dingbat (Applegate), Egg and Alyssa (Ladd) binging on cake before discussing their purging habits with unsurprisingly drugs once again being the solution to all of life’s problems. At the same time there are moments which truly catch the viewer off guard such as shocking rape of one character, another is bludgeoned to death with a soup can, while the ending itself is almost like a bizarre tribute to Kafka’s “The Metamorphosis”. Needless to say while not every idea in the film works, Araki still throws enough at the screen to balance out the misfires with some truly memorable and frequently stunning imagery.

The soundtrack like the majority of the film is a relic of the decade it was released, with the likes of Suede, Hole and Elastica all appearing on the soundtrack, while we also get the old school Marilyn Manson track “Kiddie Grinder” making a welcome appearance, to what is a surprisingly rocky soundtrack, especially for a Araki who usually leans towards more Shoegaze, which still makes an appearance but as more of a background presence outside of the title sequence.

While perhaps a little too arty and irrelevant for some, especially when the plot and the characters, like the title suggests go “Nowhere” but at the same time it is bold and fascinating film making and the sort of film, that most Mumblecore films seems to be trying to imitate, if in perhaps a slightly less explicit style while this film remains a testament to the underrated era of film making originality which was the 90’s.
Posted by Elwood Jones at 15:27