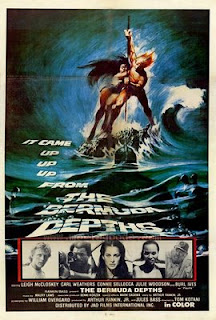 Title: The Bermuda Depths
Director: Shusei Kotani
Released: 1978
Staring: Leigh McCloskey, Carl Weathers, Connie Sellecca, Burl Ives
Rating: 5 / 5
Plot: As a kid growing up in Bermuda, Magnus (McCloskey) has a pretty rough time of things, first when his childhood friend Jenny is carried out to sea by a turtle and when later that night his scientist father is killed by a cave in while working in his underground lab. Years later Magnus returns to Bermuda to find out more about the mysterious circumstances surrounding his father’s death, were he finds Eric (Weathers) and Dr. Paulis (Ives) continuing his fathers research into Gigantism, as they try to track down The giant sea turtle referred to by the locals as “The Devil”. Meanwhile Magnus is reunited once again with Jenny (Sellecca) who may also be linked to the “The Devil”.

Review: I shud start by pointing out that, I originally stumbled across this film by accident, while looking up “Orca” (1977) which was one of many cash ins upon the release of “Jaws” (1975) and to be honest when I saw this film being mentioned on the IMDB boards I was expecting pretty much the same as Orca in that it would be just another giant animal of some description feeding off the local population, which of course is the complete opposite of what this films turned out to be, with it being more of a supernatural love story, which is what I discovered when I finally sat down to watch it, which in turn is thanks largely to Youtube, as right now outside of grainy VHS to DVD transfers your going to have a hard time finding this film anywhere else.
Opening with B movie style opening music as the title shakes onto screen, this music is suddenly replaced by the haunting theme music “Jennie” by Claude Carmichael, as the camera moves through the sea bed, giving the audience that any moment your going to catch a glimpse of the giant sea turtle, or see some expendable extra being killed off suddenly which off course you don’t, instead we get opening of Young Magnus playing with Jenny on the beach, as they find a turtle egg, which they then proceed to raise, into a full grown turtle as Magnus falls for his childhood friend, even carving their initials into the shell of the turtle, which I’m guessing the turtle kinda objected to seeing how in the next scene, its taking Jennie out to sea, as Young Magnus can only stand on the shore and watch. With the young Magnus now without a friend in the world which is rough enough, if not for the next scene being that of his father being killed as the roof of his underground lab collapses, so with all these happy moments from his childhood witnessed we now skip forward to present day were Magnus has now grown up, having spent the last few years wandering the globe and shock horror hanging out in hippie communes (this was no doubt scarier back in the 70's, judging by Eric's wifes reaction) trying to find himself, before returning to his childhood home. From this moment onwards we are thrown straight into the pursuit of the giant turtle, as we are teased with several moments, in which we think that we will see something only to be denied being shown everything, bar torn nets, which it seems, is the great plan that the scientific genius that is Dr. Paulis has come up with for capturing the giant turtle, which makes me wonder why in these kinds of films, when it comes down to capturing giant creatures that the plan for capturing the creature is always kinda ropey, I mean seriously what exactly made them think that a flimsy net will be able to stop a giant turtle? Still figuring that they just need a stronger net, rather than perhaps a better plan they call it a day. 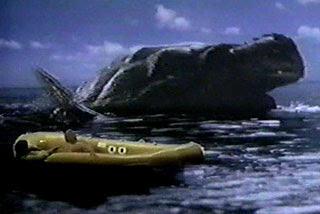 Now the story could just stick with the capturing the turtle angle, but instead we now get reintroduced to the now full grown Jennie, whose name it seems much like the turtle is surrounded with much myth which one of the locals explains to Magnus, as we are shown a flashback to Jenny offering her life to The devil ( The turtle that is not the red guy with hooves ) long ago in the past when the ship she was travelling on was threatened with being sunk….but could this Jennie and the one from Magnus’s childhood be the same person??? Well no doubt you’ve already figured that part out for yourself, as the story turns into a supernatural romance, which the devil becomes more background element, until towards the end when Eric now suffering from Ahab syndrome is obsessed with capturing the devil, setting out with Magnus on a do or die mission to capture the creature, which is when the story starts baring a lot of similarities to the ending of Jaws, but manages at the end to at least give us an ending that is unexpected and in many ways kind of shocking and sad.
Carl Weathers is great in this movie; especially the more obsessed his character Eric becomes with capturing the turtle and it’s good to see one of his older roles before he started playing his action hero past for laughs. It is also worth noting the incredibly gay wardrobe that Eric wears throughout and which Weathers manages somehow to make seem completely straight, even while wearing probably one of the smallest pair of shorts ever captured on film!
The effects through out are mainly on the budget side of things, with some ropey miniature works, which is made all the more apparent in the scene, in which the Helicopter crashes into the devil, coming off slightly more humorous than what was no doubt originally intended. The giant turtle effects though are satisfying even if it sounds like a humpback whale as well as the glowing eyes feel slightly unneeded and were no doubt added to give the creature a supernatural edge to it. 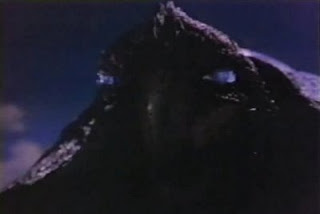 True it might seem a bit of a cheat to give the audience this idea of seeing a giant turtle, only for it to appear briefly at the end, but despite this I never felt cheated by instead being given a love story of sorts between Jenny and Magnus, with Jenny being torn between her duty to serve the devil and her feelings for Magnus.

For a film that was originally released as a made for TV feature, it has over years gained a large following, taking it beyond what was no doubt it’s originally lifespan and is defiantly worth giving it a look, while we continue to wait for that ever illusive DVD edition, as the song “Jenny” continues to haunt your dreams long after the film has finished.
Posted by Elwood Jones at 06:57