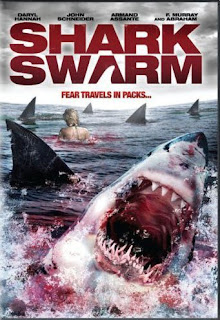 Plot: A greedy real estate developer has been dumping illegal toxins into the sea around Full Moon Bay in an attempt to kill off the fishing trade and force people to sell up to him. However the toxins do have another effect on the marine life as they make the sharks more aggressive and hungrier. With the sea almost devoid of fish, the sharks turn their attention to human prey.

Review: Ever since Steven Spielberg made "Jaws" the majority of people have had an everlasting (and slightly misguided) fear of sharks aswell as setting foot in the ocean, while the movie exec's have also since then constantly attempted to recreate the formula, which made Jaws such an insanely popular movie
Ie: Giant Shark + Gruesome deaths + Decent shocks = Box Office Gold
Sadly enough all this so far has resulted in a whole heap of clones, none of which managing to capture the spirit of that original movie and while it's true some movies like it's imaginatively titled sequel "Jaws 2" and Joe Dante's "Piranha" which was more a cash in by producer Roger Corman and is already set for a 3D remake this year with "Switchblade Romance" director Alexandre Aja at the helm, but as you've probably guessed by now "Shark Swarm" is not one of these select few.Originally released as a Mini series by Hallmark, it has since been edited into a full length feature, much like fellow creature feature "The Beast" which was penned by Jaws author Peter Benchley, who ironically became a Conservationist after Jaws saw it's initial big screen release and upon seeing the public mass hysteria, choose to dedicate the rest of his life to protecting sharks, which he'd manage to demonise. "Shark Swarm" however chooses to concentrate on the usual general opinion of sharks, though atleast bothers taking a more unusual tact by having the sharks swarming, rather than turn into supersized predators which are the usual outcomes when animals come into contact with chemicals, if I've learned anything from the movies it's that much. Sadly though this is were the originality ends for the script, which after an initial bloody attack, as we bare witness to a shark tearing lumps out of another shark, the movie then quickly spirals downhill.The cast it's obvious from the get go are mainly were the budget has been spent, as well as some slightly repetitive footage of the CGI sharks, which look decent enough and aren't so shoddy that they detract from the film, unlike many low budget entries in the creature feature genre, which you can't say for Daryl Hannah who spends a lot of the film looking, as if she's has the emotion botox'd out of her face, as she struggles to perform even the simplest of emotions and no also providing us with the scariest moments of the film, when we are forced to endure a close up of her face, leaving it up to Smallville's John Scheider to hold everything together, as the hero fisherman of the piece, whose currently refusing to sell his property and the one thing standing in the way of the evil real estate developer played by Armand Assante, who for some strange reason towards the end, turns into more of a second rate bond villain, even choosing to despatch of Scheider's and Hannah's characters by lowering them slowly into shark infested water. all of which means that the actual sharks are shunted way into the background, to a point were they are fairly non existentent outside of numerous filler scenes of bloodless shark attacks, which are after all the main selling point of the feature, but when you have nothing but a bunch of death scenes, that are dryer than a kitty litter tray, with the camera often cutting away at the last second, you can't help but feel slightly cheated and not really giving much of a toss about what's happening elsewhere. The other main downside to the shark attacks being that, despite the fact that there are numerous shark attacks, nearly all the characters have only just been introduced before they are suddenly being killed off, none of which are missed much by the small town population, who don't even seem to realise that they are missing, even when it's characters like the cranky fisherman or the swimming teacher. Jaws might have only had a handful of attacks but each one added to and furthered the plot, while in "Shark Swarm" they are nothing but filler and seeing how around thirty people get eaten, that amounts to a lot of filler and just another way of reminding you that you are watching a movie with killer sharks and not some made for TV Thriller.Meanwhile I guess we must continue to wait for "Meg" to finally surface, which based on the cult series of books by Steve Alten has been stuck in production hell since 2007 with a release date for 2010, so until then we must continue to tease ourselves with the promotional artwork, which currently only tantalises us further, while the fans of his books have a slightly shorter wait for the forth book in the series "Hell's Aquarium" which currently is set to be released on May 19th this year, but no matter how desperate you are for your shark attack fix, why not try "Piranha" as although it's budget only really streched to a few plastic fish and some bubbling red water, it was alot more effective than this wash out. 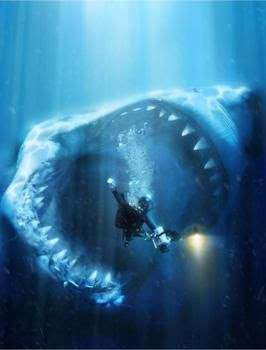 Promo art from the long delayed "MEG"
Posted by Elwood Jones at 00:46