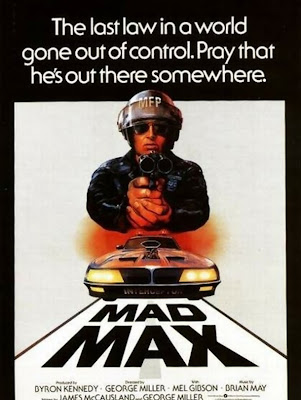 
Plot: Set in the near future were with the Earth’s oil supplied nearly exhausted, society has begun to fall apart. Meanwhile Main Force Patrol (MFP) officer Max (Gibson) soon finds himself the target of a vengeful motorcycle gang lead by the Toecutter (Keays Byrne) after he accidently kills one of their members

Review: One of the key Ozploitation movies of the Australian New Wave era and a film which despite its limited budget would not only spawn two sequels (with the third “Fury Road” as of the time of writing currently in production), it would also go on to set the benchmark for car smash movies. This is only further justified when you look at what is possibly one of the greatest opening sequences ever rivalled perhaps only by “Narc”, as we are mere minutes into the film, before we are straight into the opening car chase, featuring a caravan being decimated, cars flipped and even a rocket car, all shot with a heavy dose of car porn as Director Millar ensures that the whole sequence is shot at break neck speed.

Inspired by a strange yet effective combination of the post apocalyptic cult classic “A Boy And His Dog” (Sadly he choose not to also use a talking dog), the 1973 fuel shortages in Australia, were motorists were frequently resorting to violence to fill their fuel tanks, aswell as what Millar was seeing while working as an Emergency Room doctor and from these sources he crafts a world of violence and chaos, one he would continue to build on with the sequels to create a truly original vision of a post-apocalyptic Australia. However it is not a world without hope which in this film comes from the skeleton crew of MFP officers still trying to maintain law and order, despite the local populace becoming increasingly more wild and violent, while the courts have all but collapsed meaning that they frequently struggle to make their arrests stick, with the crumbling halls of justice sign essentially capturing their current state. Meanwhile Millar truly captures a society on the edge of implosion.


Within this world Miller undoubtedly crafts some truly memorable characters, a trait he also carried over to the sequels, with fleshed out characterisation which extends well beyond the main characters and carried right through to even the most minor characters so that it feels like a living world that the film exists within. As the big evil of the film Keays-Byrne makes for a suitable intimidating villain as the Toecutter, a role he reportedly based on Genghis Khan which is a pretty suitable model considering the nomadic styling his gang and while he might not be anywhere as psychotic as the villains who followed, as he prefers to have his gang carry out his dirty work, while using his towering size to intimidate those he encounters, aswell as to keep his gang in line.


Despite the challenges and horrors Max faces on a daily basis, he refuses to give in as he continues to try and fight the good fight, finding solace from the horrors he sees from his loving wife and child who provide him the rock he needs, something which is only emphesised by him becoming the titular Mad Max after they are viciously killed by bikers in a truly hunting sequence and one which I found affecting me more while rewatching it for this review, possibly because of being a father myself, something I was on the previous times I had watched this film. It is a role embodied by the fresh faced Gibson, with this film launching him into superstar status, despite originally only attending the auditions for the film to support his close friend Steve Bisley who here appears similarly as Max’s best friend Goose. Ironically it would be the battered appearance he turned up to the audition in as a result of the previous nights bar brawl that would land him the part, with one of the casting agents advising him to come back as “We need freaks”. Gibson despite his inexperience perfectly manages to potray the two sides to Max, especially in his transformation from loving family man to ice cold avenger.


The violence here despite the films legacy is largely retrained and more implied with Miller preferring to give the viewer bursts of intense violence, which can be slightly disappointing after such a strong opening that the film on first viewing can feel like one drawn out chase movie, as Max and his family try to escape from Toecutter and his men, who are quick to spurn themselves into a whirlwind of violence and rape (Both male and female with bisexual / homosexual villains one of the more random  reoccurring themes of the series). While future instalments would amp up the violence, this film instead is more a study of revenge and what happens when a man reaches his breaking point, with Max’s revenge being especially blunt as he utilises both his trademark black pursuit special but also a sawn off shotgun as his tools of revenge, while memorably forcing one gang member to choose between sawing through a chain or his ankle to avoid being blown up in a scene which would also provide the inspiration for “Saw”. Needless to say this is world were only those willing to fight or give in to more primal instincts survive, aswell as one were the intimidating MFP Captain is called FiFi (Ward)


While it is my least favourite of the trilogy, it is a film which benefits from a repeat viewing or atleast some prior warning over what to expect, especially when comparing to the sequels, which are very much a different beast in comparison, but as an origin story it is still solid on its own merits and a films which certainly has lost nothing in the years since its release.
Posted by Elwood Jones at 14:37