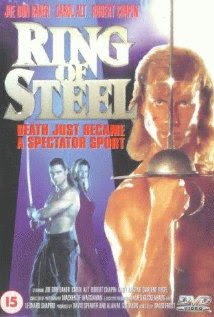 Plot: Champion fencer Alex (Chapin) suddenly find himself blackballed from the fencing community after accidently killing an opponent during a tournament final. Now with his life in turmoil he is given a chance by a mysterious stranger (Baker) to use his fencing skills by taking part in underground swordfights.

Review: I don’t think I’ve had as random a viewing experience as I did watching this film since I first saw “Xtro 2: The Second Encounter”, as only then did I find myself watching a film which spectacularly fails in certain areas, only to then excel so well in others that it bizarrely manages to balance things out. Does this make for a good film? Maybe not but it does certainly make for an interesting watch to say the least.


Scripted by leading man Chapin, while being later lightened up by director Frost after the studio felt that Chapin’s script was too dark, while after seeing the film now makes it a script I would not love to read, especially after seeing how generally generic the final film turned out to be much like so many tournament martial arts movies, with the sole difference here that the focus is on swordplay rather than hand to hand combat / fighting styles. Something not overly surprising when you consider Chapin’s background (much like most of the cast) is in stage combat and swordplay role with his IMDB profile listing both “Army of Darkness” and “Hook” in his extensive list of credits, which more recently has seen him focusing more on his work in visual effects, aswell as working on his web based vampire series “The Hunted”.


As a lead Chapin is likeable enough, while certainly processing some of the most impressive swordplay skills of any of the actors here, as certainly highlighted during a playful duel between himself and Brian (Pirri), which not only pays homage to “The Court Jester” but has a great sense of fun, as the two trade sarcastic barbs while seemingly playing a game of one upmanship to see who can come up with the most flamboyant move. It is however the swordplay scenes which cover for his shortcomings as an actor, seeing how he approaches the role with a playful attitude but never seeming to be able to transfer his Errol Flynn wit from his duels to any of his other scenes when he doesn’t happen to be in a duel with another character.


The plot is pretty standard affair and none to dissimilar to the old school video game “Barbarian” (sadly without a little guy who kicks the decapitated losers head off screen) with Alex having to fight his way through the ranks to a showdown with the current champion Jack (Kasper), a meathead who seems to be taking fashion tips from “Dog the Bounty Hunter” judging on his dodgy looking mullet, which even for the early 90’s is still not a good luck. Jack for the most part makes for a half decent big evil, even if he is never quite the intimidating force that the film would like you to think he is, much like it can never truly decide who the bad guys are supposed to be seeing how it varied from Baker’s (who is always in great form) unnamed Man in Black, the devious seductress Tanya (Alt) or Jack. Frustratingly none of them other than Jack ever really committing to the position of big evil, let alone having any real kind of plan for Alex outside of forcing him to compete.
Thankfully there is enough action here to keep things ticking over, which is were the real appeal of the film lies, as with most of the cast coming from swordplay backgrounds and most being more known for their stunt work than acting roles and hence ensures that we get to also see a wide range of fighting styles, as Ninja’s, Gladiators and even Alex’s fencing style being used for the entertainment of the crowd, in what could essentially be seen as UFC with weapons! However despite what the title and trailer would have you believe the titular “Ring of Steel” is less of a bloodsport than the film would like you to believe it is, especially considering how there is only one death which actually occurs in a match, with the other matches featured throughout all being fought until one fighter yields to the other, something it is hard to tell if it was the result of script changes or of this was actually intentional. Meanwhile despite Alex being supposedly forced to compete in order to free his girlfriend Elena (Vogel), who is meanwhile being held hostage yet from the amount of fun and buzz he gets from competing it is hard to say he really cares either way if she ever gets set free or not, again something which appears to have been carried over from the original script which saw Alex not being able to recognise her in the original ending after he gets drawn too deep into this world he now finds himself thrust into.

Still randomness is something that film has in spades; even outside of the main plot we are still treated to scenes such as the cosplayer dressed as a barbarian who stumbles into the training session for new fighters, only to soon find himself on the wrong side of a brutal beatdown. However it doesn’t end there, as we also get possibly one of the most bizarre taunts ever, when Alex and Brian decide to taunt Jack by sending a chicken out to the ring a scene which I’ve yet to make any sense of even now as I sit here writing this review, much like the random sex scene less than 15 minutes into the film, which felt unneeded let alone misplaced appearing when it does.


True this is a film with some serious flaws and while it might linger around the ass end of okay, it is still a highly watchable film, whose swordplay angle helps to mix things up to stop it being yet another tournament movie and while the film optimistically hints at a sequel, I can’t say it is something I’m exactly in a rush to see happen anytime soon.
Posted by Elwood Jones at 14:27