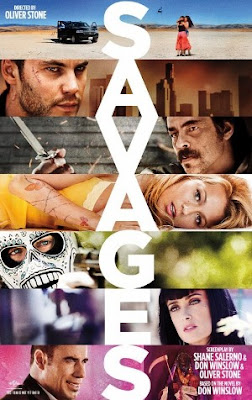 Plot:Ben(Taylor-Johnson)and Chon (Kitsch) are best buddies and pot growers. Ben is a UCLA graduate while Chon is a former Navy SEAL, making them an effective combination of brains and braun, while bizarrely sharing a hippie girlfriend, named O (Lively). With their focus being on running their business with none of the usual violence associated with the drugs trade DEA Agent Dennis (Travolta), allows the boys to get away with their set-up on account of nobody getting hurt. However Elena (Hayek) who heads up a Mexican drug cartel decides she wants a piece of the peaceful action. But when the boys refuse the offer, Elena kidnaps O. But the boys won’t take that lying down as they take matters into their own hands.

Review: When it comes to naming legendary directors, Oliver Stone’s name is certain to be amongst them. especially when you look at his directorial body of work which includes such classic movies such as Salvador, Wall Street aswell as his Vietnam trilogy (Platoon, Born on the Forth of July, Heaven and Earth). However this is not to say that he has not made a few less than legendary directing choices such as the overblown historical biopic “Alexander”. Still after his last film the fantastic and long awaited “Wall Street 2: Money Never Sleeps” it looked like he might be back on track…..then of course I saw this movie.

Originally brought to my attention when compiling my 2012 films to look out for over at "Diamonds In Da Sky", this film seemingly has set out to reinvent the drug dealer movie and our general perception of drug dealers as being slimy and psychotic cokeheads, by instead giving us Ben and Chon, who are anything but your typical dealers, as they run their business largely violence free, outside of the occasional persuasive visit from Chon. However in his attempts to truly shatter the mould and portray these two as just two fun loving guys who happen to sell copious amounts of pot, director Stone manages to make the first to many blunders throughout this film as he paints the peace loving new ager Ben as what Jesus could possibly have been like had he sold pot on the side and even he would have a hard time keeping up with Ben, especially when painted with such holier than thou tones, with pretentious scenes such as him being shown travelling the world helping third world villages on the back of his drug profits. Meanwhile the only time we see him selling pot, it is only to those with terminal illnesses, because of course it’s all about helping people and not about making the pile of cash which bought their luxury condo, things which are pretty much glossed over throughout.

Thrown into the mix we have their stoner girlfriend O, whose over written dialogue, provides the narrative throughout, while occasionally throwing out such pretentious lines like

“Just because I'm telling you this story... doesn't mean I'm alive at the end of it”

Which would have been better, had it not been used awhole lot better back in 99 in "American Beauty", while loosely fleshing out their characters with the occasional burst of information, such as how they met her and how they started their enterprise, yet never properly explaining how their open relationship came to be, besides describing their sex life, which by the end of the film was possibly the only thing we really knew about these characters outside of the minimal amount of characterisation they are given. I mean how did this relationship come to be and why does she hold such power over them both? Questions which are for some reason never answered much like how they can have such a jealously free relationship. This also extends to the villains who are just as equally sketched out, with a handful of interesting facts such as Drug baroness Elena’s turbulent relationship with her daughter, supposedly meaning to cover for how little we really know about these characters outside of their various actions.

Such poor attention to the smaller details, means that while we encounter several great characters, only for them to largely end up coming off shallow and no doubt would have even failed to spark even the base amount of interest, especially with the bad guys which essentially only work because of the fun performances by Hayek and Benico Del Toro who seems to be having the most fun of all the cast as the sleazy cartel underboss Lado, who I couldn’t but feel was fleshed out by improvisation by Del Toro, especially during scenes such as the hit he carries out on another dealer, were as he interrogates him he tosses away anything which could be used against him as a potential weapon.
The other main flaw here is certainly with the bloated two hour run time, which seems to have been a luxury only afforded because of the weight which Stone’s name carries and while it might be an eventful film, it still felt that there was a lot which could have been trimmed out of the film to make for a tighter run time. Equally frustrating is that we get one ending which would have been a bold choice and almost redeeming, only for it to be scrapped and replaced with what could probably be best described as the Scooby Doo ending as I half expected Elena to be shouting “I would have gotten away with it too, if it wasn’t for you pesky kids!”.

The film however does look really nice, with Stone once again harnessing his visual side to maximum potential and this especially comes into play during the handful of action scenes we get, even though the trailer would have you believe it to be more action packed than the pulp thriller we do get. Still even viewed like this it is hard to even recommend it as mindless trash to waste a few hours with, especially with being so bloated it more often than not left me with too much time to question such minor things, like why everyone is pretty much dressed in every sex scene the film has and what modern films have against gratuitous nudity, especially in such seemingly free thinking times?? Still any film which leaves my mind to wonder as much as that is one to be approached with caution.
Posted by Elwood Jones at 13:39