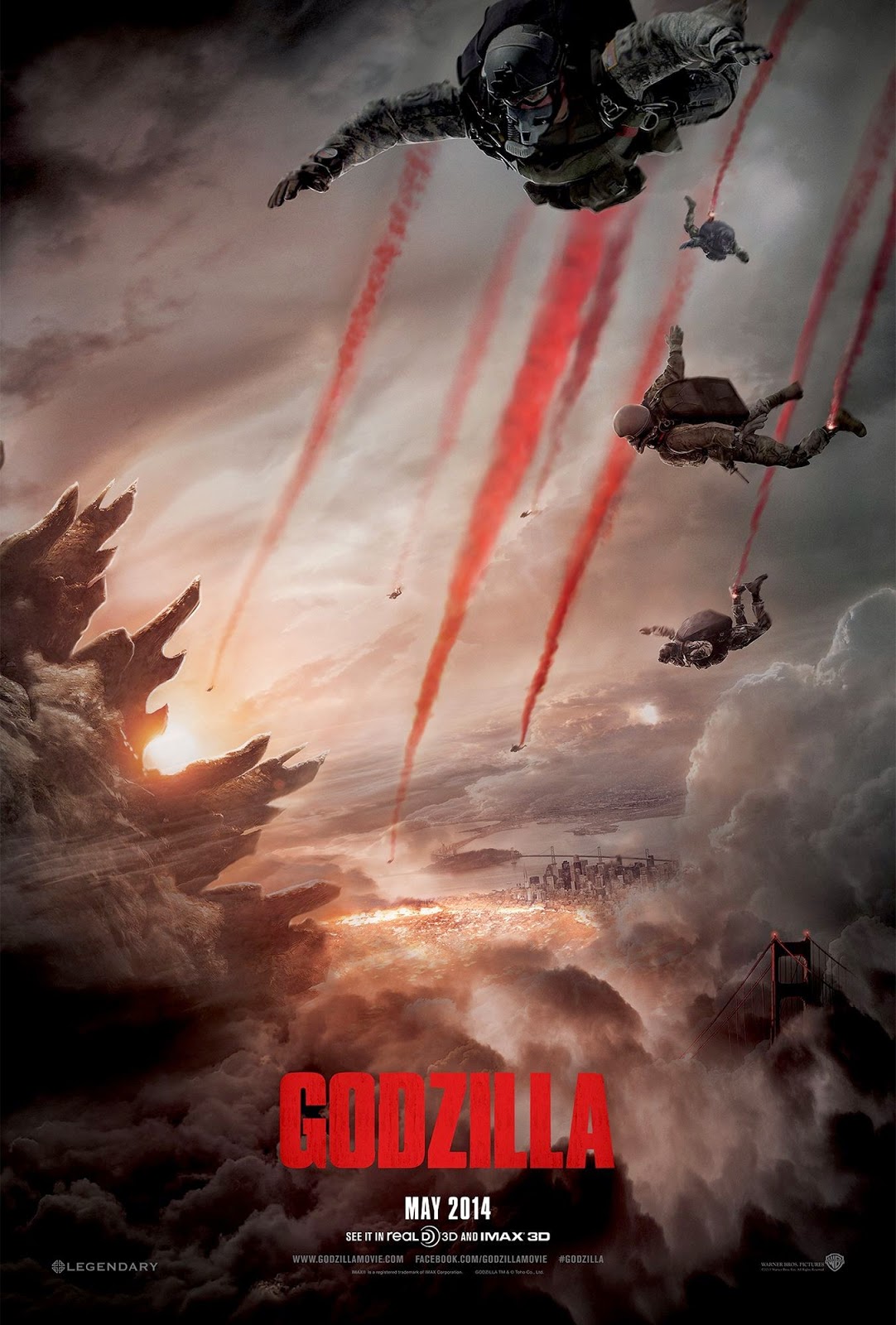 
Plot: In 1999, The Janjira nuclear plant was mysteriously destroyed in what was presumed to be an earthquake, while also killing plant supervisor Joe Brody’s wife Sandra. Years later Joe is still obsessively searching for the truth, while his now grown up son Ford now works as a Navy ordnance disposal officer. Together they now discover the real truth behind the accident at the plant, as the world is now faced with a horror which only Godzilla can save us from.

Review: It’s hard to believe but it really has been ten years since the release of “Godzilla: Final Wars” the film which many saw to be the final Godzilla film, something which only seemed to be resonated at Toho, the studio which had been the home of Godzilla for over fifty years and whom following “Godzilla: Final Wars” had dismantled their legendry water stage which had played such a key part of numerous Godzilla productions. Elsewhere Tristar Pictures who had been responsible for the much lamented 1998 American adaptation had let their rights expire in 2003 having long since given up on their idea of producing their own trilogy of films. The fans meanwhile continued to hold out hope for a new film as their love for the Giant radioactive lizard continued to live on through their repeated viewings of the of the original films and in 2009 their prayers would be finally answered when Legendry picked up the rights the long awaited end results of which we now see here and finally confirming if it was really worth the wait or if final wars really should have been final. Thankfully the wait has been worthwhile as here Director Edwards gives a film which is not only a worthy addition to the franchise (doubt anyone will be calling this version zilla in the future) but still manages to add his own style to the film in the first of a proposed trilogy films and more impressively managing to do all this without technically rebooting the franchise.


Edwards whose previous film was his low budget debut “Monsters” is certainly an interesting choice, but seeing how the 1998 version had been helmed by blockbuster director Roland Emmerich, you can hardly blame them for choosing to take a risk on a relative unknown especially to mainstream movie goers who no doubt missed out on the genre jumping antics of his debut film, a trait which he chooses to carry over here. Not content it would seem with telling a straight giant monster story it would seem here he actually pushes the giant monsters bizarrely to the background preferring to give us a road trip movie (of sorts) as Joe makes his way from Japan back to San Francisco to get back to his wife and son. Bizarrely rather than detract from the film, this unique approach strangely works even if you’re not quite sure what you’re watching exactly as for a Godzilla movie he does spend a fair part of the movie feeling like a supporting character rather than the marquee name we expect.


While Edward’s approach might certainly be unique there is still an overwhelming sense of respect that he clearly has for the franchise, approaching Godzilla without the slant of being either good or evil, but rather as very much a force of nature and every bit the anti-hero that he was in his early films and throughout the Showa era. This vision of Godzilla is instead a monster driven by the single minded desire to hunt and destroy his prey and its really just good luck for the human population if said prey happens to be attacking major cities. It is also an approach which is carried over to both Muto’s who equally care only about getting to sources of radiation in an interesting counter to the anti-nuclear stance which Godzilla represents. Edward’s however gets things spot on when it comes to highlighting the size of his monsters, with the frequent use of low angles and scale establishing shots such as the ones of Godzilla swimming underneath battleships. Unquestionably though the real highlight here though is Godzilla’s first full appearance which sees him first highlighted with signal flares before being given his full reveal which squashes any grumblings regarding a Western Godzilla having the same presence as the original and for the record no I don’t think he’s too fat, though still confused as to why Edwards insisted on giving a face similar to King Kong? Did he not think that audience could feel for a radioactive lizard?

The human cast are all great, even though "Breaking Bad" fans might be a little upset to see Cranston reduced to more of a supporting role than the trailers suggested. Taylor-Johnson meanwhile still seems be being pigeonholed into being an action star and while he is still believable you can't help but feel that he would be more comfortable in a more dramatic role. Elsewhere Watanabe seems to only be on hand to spout philosophical musings and if its like the screening I was at provide some of the audience with a cheap thrill of how he pronounces the word Godzilla.

Needless to say with Edward’s aiming for a more realistic approach to the series, which is hardly surprisingly considering how leaps of fantasy are not exactly in vogue in Hollywood thanks to the success of Christopher Nolan’s Dark Knight trilogy. This of course means no Kung fu antics from Godzilla or Muto which I didn’t honestly expect to see anyway and such didn’t disappoint me that it is a much more animalistic and natural fight that we get when the monsters meet (if one were they breath radioactive fire) and seeing how Godzilla maintains the rest of his traits including the aforementioned radioactive flame breath whose appearance would have been more of a showpiece had it not been ruined by one critic’s twitter feed after attending one of the advance screenings (cheers for that). What frustrated me though was that it was during these scenes that the fact that Edward’s is using the monsters as the background for Ford’s journey really became apparent, none more so than the first meeting of Godzilla and Muto were just when we expect to see the two monsters clash, the film suddenly cuts to Ford’s son watching the attack unfold on a news report! Seriously if you’re going to play the tease these are really not the scenes to do it with and its only how unexpected and well cut this scene is that it stopped it from frustrating me further.

The other niggling issue with Edward's directing is the worrying amount of shots which seemed to have been borrowed from other films, with Jaws and Jurrasic Park, aswell as more interestingly "The Abyss" all having seemingly being homaged here only sadly with none of the fan boy nodding flair that Tarantino brings to his own homages. At the same time the film frequently can't decide what sort of films it want's to be which might be a lot to do with its placement on the summer blockbuster schedule and why we get so many shots which made me feel like I was on a Universal Studios thrill ride, with the monorail attack being a prime example of this.

True this film might have some issues with some of its directorial choices, but this is still a great addition to the franchise and a promising start to what will hopefully be a great trilogy, especially if Edward's is to stick with it and maintain his creative vision throughout like Nolan got to with his Dark Knight trilogy even more so when the prospect of Monster Island and Mothra have both been seriously hinted at as making an appearance in the next film. At the same time though I still have o view this film as its own film and should be viewed as its own trilogy rather than an extension of the original saga but needless to say the King of Monsters is most certainly back!
Posted by Elwood Jones at 22:16