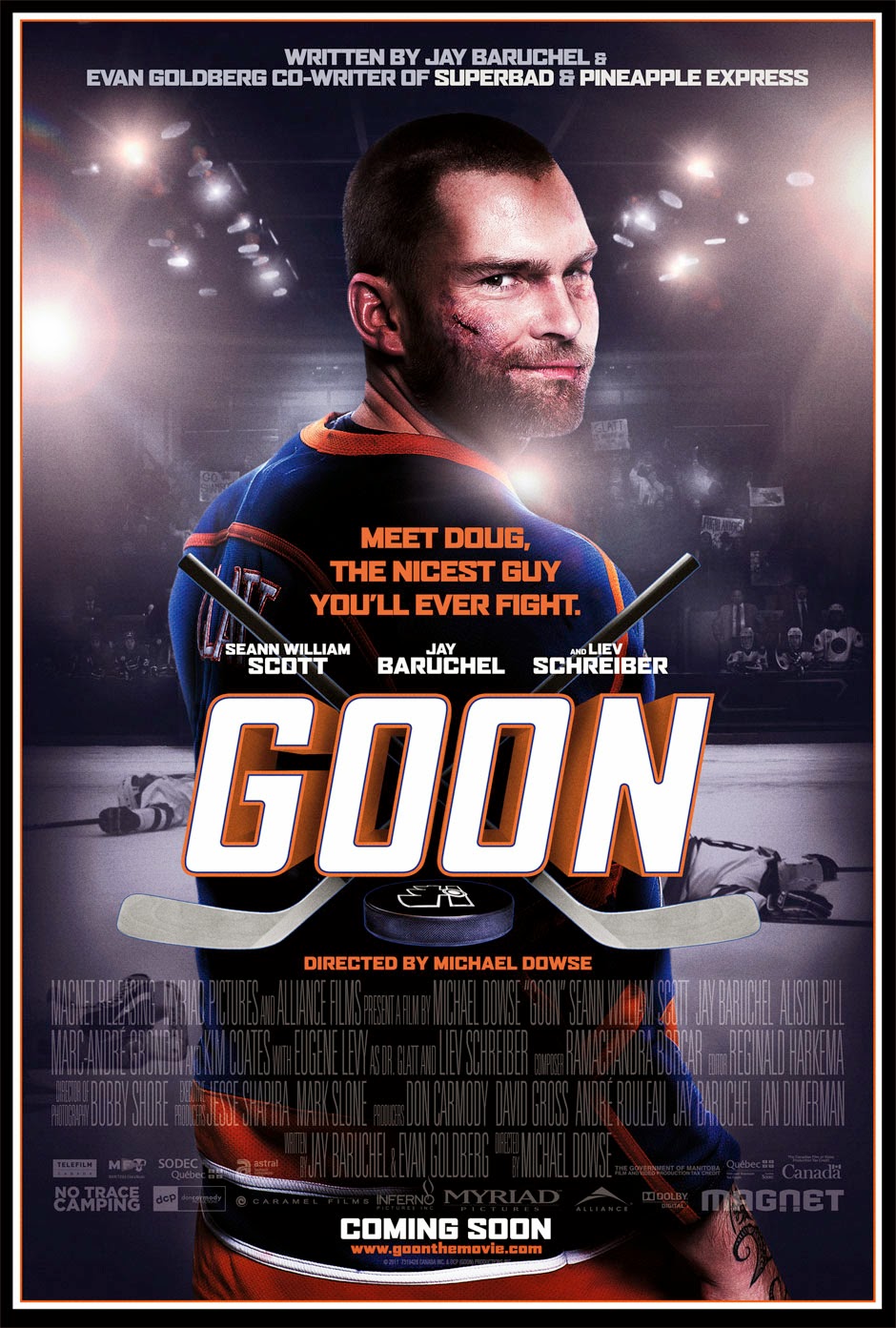 
Plot: Doug (Scott) a simple bouncer blessed with remarkable fighting skills and a thick skull suddenly finds himself drafted to his local hockey team as an enforcer (aka Goon) as he suddenly finds a new use for his unique skill set.

Review: For whatever reason soon after this film was released it seemingly sank without trace, more so here in the UK were honestly we don’t exactly have a vibrant Ice Hockey scene and which might have had a lot to do with its current under the radar status, despite receiving a fair amount of praise from the critics on its release.


Playing like “Raging Bull” meets “Slap Shot” it is strange mixture of black humour and extreme violence which forms the back bone of this film, which might go a way to explaining why it’s become such an overlooked film as like a John Water’s film it is an acquired taste and one which really won’t sit with everyone especially as most moviegoers prefer to either be amused or shocked with violence but ideally not at the same time. Still when you consider that ice hockey is a sport renown for its spontaneous fights it is hardly surprisingly that they is the mixture that director Dowse choose to go with.


While Williams might be best known for playing the loud mouth jerk and general pervert Stiffler in the “American Pie” films, he has actually done quite a few decent movies outside of this franchise which have frequently shown him to have more range than expected with key examples being “Final Destination” and my personal favourite “Southland Tales” which saw him playing the polar opposite of the characters we have come to expect from him. This again is another of those kinds of roles as despite the fact that here he is playing a guy whose sole purpose in life is to beat the snot out of rival hockey players, it is played with such heart that you really feel for the guy, even more so when all he ultimately wants is to viewed as being more than the black sheep of the family, especially when both his father (Levy) and brother are doctors a family field which it seems alluded him somewhere on the path to his current situation.


Despite not knowing how to skate, which is kind of a major setback when you’ve been drafted to an ice hockey team, it is of course via montage that Doug is soon brought up to standard in record time. Not that this really matters as Doug is frequently advised to worry less about playing the game and to focus more on beating up members of the rival team, a job which he certainly has no problem adapting to and one which soon sees him being drafted to protect the star player of the Halifax Highlander Xavier Laflamme (Grondin) who following a run in three years prior with the notorious enforcer (aswell as Doug’s idol) Ross “The Boss” Rhea” (Schreiber) has found his career in a specular nose dive of drugs, sex tapes and general bad behaviour a spiral that they hope Doug can snap him out of by defending him on the ice. Of course it goes without saying that the outcome of this situation is pretty predictable as you know how the film will end essentially around the half-way point by which point your focus is no doubt more with the inevitable final showdown between Doug and his idol Rhea.


Meanwhile off the ice things get none the less chaotic especially when Doug find himself falling for “Puck Bunny” Eva (Pill) which also forms some of the sweeter moments of the film, especially when the Doug’s general naivety is none the more the clearer than it is here, especially when he beats himself up for falling for her, even though she is the one cheating on her boyfriend. If anything these scenes equally emphases what a generally nice guy Doug is even though he could be seen as a mindless thug because of his rather unique career path, with the pinnacle of these nice guy moments coming soon after he gets with Eva and forces her ex-boyfriend to repeatedly punch him in the face to make things up.


As the villain (of sorts) Schreiber is once again on great form, while once again posing the question as to why he doesn’t get more villain roles, especially as he is so good in these roles and here it is no exception. Despite being a player nearing the end of his career, it would however seem that his senior years haven’t made him the more mellow in fact it seems that it has made his perfect his antagonising tactics and being a general arsehole to everyone on the ice, while ignoring him seems to only make things worse as Xavier finds out when he gets a hockey stick wrapped across his skull. At the same time though Ross isn’t a psychotic hothead as you’d expect but rather a soft spoken and foul mouth guy who just so happens to love the fight especially if he can get into his opponents head first.


I guess I shouldn’t have been surprised about the level of violence in this film, as after all it a film about Ice Hockey, much less a Canadian film about Ice Hockey so while the passion for the sport is unsurprisingly there, so is the passion for the fighting which tends to go hand in hand with the sport with a multiple of unwritten rule regarding conduct in these seemingly spontaneous fights. These fights though are less about heavily choreographed fights especially when most of the time they seem to have been shot on the fly with Doug pounding on any skater who steps up, but instead are shot with emphasising the violence as blows are show being taken in slow motion to maximise their effect and with the same artistic direction which “Raging Bull” brought to its own fight scenes. The end result though is somewhat refreshing to watch, especially as blood and teeth fall in slow motion onto the ice providing a nice counter to the general crudeness of the rest of the film and only serves to make the final showdown between Ross and Doug only all he more memorable.


While this film is unquestioning one which will appeal to Ice Hockey fans over anyone else might play as a negative to some viewers especially those not overly familiar with the basic workings of the sport, as it seems that Dowse assumes that only fans of the sports would be watching it seeing how there is no real explanation of any of the rules etc. The man issue I had with this film though was the general lack of characterisation for the majority of the characters resulting in most of them being reduced to general caricatures.


True the weird mixture of violence and humour might not be to all tastes this is still a film with its share of great moments, even if at times it can be a frustrating watch as the plot meanders in places, but if you’re in need of a fix of warped humour then you can do worse than giving this a curious watch.
Posted by Elwood Jones at 14:28