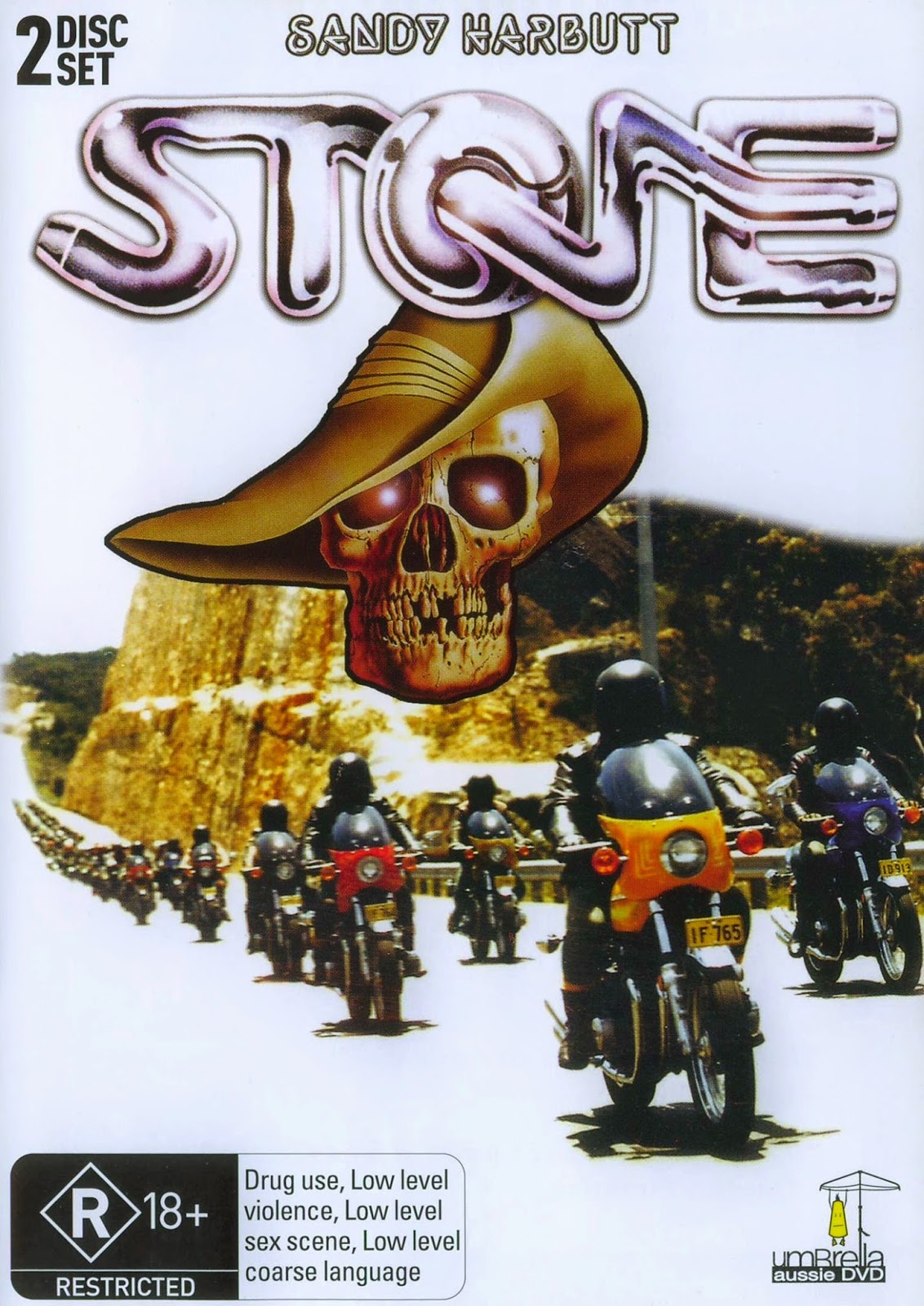 
Plot: Police officer Stone (Shorter) goes undercover with the Gravediggers, an outlaw motorcycle gang to find out who is murdering their members.


Review: Originally I had intended to review this movie way back when I did “Ozsploitation Month” only to get distracted by other films to the point were I’ve only now finally got around to watching it. It is also safe to say that it is also far from the biker movie I first expected going into it, as what director Harbutt gives here instead is more of a tibute to biker culture and the outlaw lifestyle than most biker movies would concern themselves, as the focus is put less on their hell raising antics and instead more on the family unit they have crafted for themselves.


Released five years before the first of the “Mad Max” films, which several the cast would also go on to appear in, this film would also have the honour of being the first Australian biker movie, which considering what gear heads Australian audiences are really makes it all the more surprising that no one made one earlier. At the same time the Ozploitation era would frequently be responsible for so many of firsts like this including giving the world Australia’s first Kung fu movie with “The Man From Hong Kong”. Sadly though despite this legacy the film has largely been forgotten and no doubt I too wouldn’t have known about it like so many films in the genre had it not been for the truly essential documentary “Not Quite Hollywood” which equally served to provide a handy watch list for the Ozploitation genre aswell as countless stories to highlight the indie film making methods being used to make them.


Opening with not only with some seriously trippy visuals as one of the bikers witnesses the assassination of a politician while on a serious acid trip, but some fun bike porn for those of you who like your motorcycles as the Gravediggers roll out on old school Kawasaki’s (according to Wikipedia) with the opening credits being made up of sudden freeze frame shots of different parts of the motorcycle as the rider prepares for a ride. From here we get to watch various members of the Gravediggers being taken off in a variety of creative ways including the old wire decapitation aswell as an incredible cliff jump. While these moments are fun they are then completely overshadowed by arguably the best scene of the whole film with a biker funeral precession complete with motorcycle and sidecar coffin and a line of bikers which never seems to end, as some four hundred bikers turned out to help with the filming of the scene.


The downside of this scene appearing so close to the start though is that the rest of the film never manages to better it, especially as the pace becomes more sedate with Stone slowly earning the trust of the Gravediggers while at the same time becoming ever more drawn into their outlaw lifestyle, which here Harbutt chooses to show as being less anarchic in nature than other biker films and instead showing the group living in an almost hippie commune style situation. Equally interesting is the fact that Stone openly admits to being a police officer from the start, rather than the film taking the more well-travelled road of him hiding his true identity and finding a way into the gang. This honesty does as a result create an almost anthropological style situation, as the bikers immediately distrust Stone due to him being a cop and hence the embodiment of everything they despise. The scenes which follow all charting the slowly increasing trust he earns from the group by participating in gang brawls and from his riding skills all the while finding himself slowly being increasingly drawn to their lifestyle the more he learns about them. This is of course only further helped by the Gravediggers being slightly deeper than your usual bikers as highlighted during the scene where they share their stories of what brought them all together, with the majority of them taking on the outlaw lifestyle due to delusion with various aspects of society, with most falling under hot topics of the period.


While Harbutt might not here be focused on the usual biker antics he does however still give us a fair few including a parking lot brawl with a rival biker gang. What is especially interesting about these scenes though is trying to figure how much of the action was planned, seeing how Harbutt recruited a number of real bikers for the film who he was also paying in beer leading unsurprisingly to a number of fights breaking out on set, with the situation only being further antagonised by Roger Ward who for some reason thought it would be a good idea to call the local Hell’s Angels chapter a bunch of poofters from the hotel balcony. Harbutt aswell was a big fan of the group being believable in their roles and insisted on the group living embracing their roles as much as possible which saw them living the biker lifestyle throughout filming, a situation which also reportedly made it far from a fun set for the female cast members many of which complaining of being objectified throughout filming.


While it might be now more overshadowed by the “Mad Max” films this is still an enjoyable movie, even if its opening fifteen minutes is misleading as to what the rest of the film will be like, especially with the earlier mentioned funeral scene but it ensures that while the tone for the majority of the film is pretty sedate that it still saves a jaw dropping surprise for the ending! True it might be a very different biker movie and more for the completest than the casual viewer, but as a curious watch the set pieces alone make it a worthwhile watch.
Posted by Elwood Jones at 15:57