C Is For The Calamari Wrestler 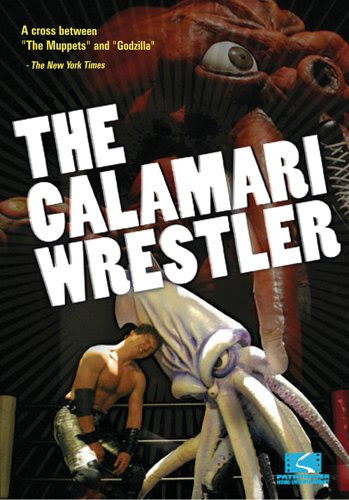 Plot: After winning the championship title in hard fought match Koji Taguchi (Akira) is shocked to suddenly have the belt snatched from him, by a giant squid who it turns out is the reincarnated former wrestling legend Kanichi Iwata (Nishimura), who was also formerly dating Koji’s fiancé Miyako (Ishida). Kanichi now in his squid form is now faced with the battle to regain the respect he earned in the ring, while facing a series of increasingly bizarre opponents.

Review: Originally I had planned to look at Ringo Lam’s “City on Fire” for my “C” entry in this alphabetical romp through Asian cinema and as though it is still undeniably a great film and I'm sure it would definatly have been fun to go over the whole “Reservoir Dogs” ripped it off argument, but instead I decided to go for something alittle more obscure and fun for this entry, as this film not only combines my love of Wrestling and Kaiju (men in giant monster suits) style brawls, but it is pretty much one of the most random movies I have ever seen, baring all the trademarks of director Kawasaki who for some reason loves to have his main characters portrayed by giant creatures, with this film being his first big hit, while also helping to lay the foundations for the equally insane “Kabuto-O Beetle” (2005) and “Crab Goalkeeper” (2006). Due to this highly unique style of film making, it’s almost impossible to look at this film in any logical terms, seeing how it defies any kind of normal logic and is the kind of film, that could truly only have been made in Japan, especially as under any other studio system it would have been churned out as a high camp romp, while Kawasaki instead chooses to play it almost straight-faced, almost as if it is no big deal to have a giant squid wrestler, let alone the giant Octopus and stag beetle fighters he introduces later and somehow he has managed to make it work, even though he never bothers to explain properly how Kanichi ended up becoming a squid in the first place, especially when Koji shows up to their showdown having turned into a red Octopus, adding to the undertones of Kafka’s “The Metamorphosis” which runs throughout, though saying that certainly don’t expect anything too deep from this movie, especially with it’s cheesy effects and Godzilla style brawls, it is only all the more surprising that links “Kaiju Big Battel” haven’t been made, as essentially this is just their antics put on film, which for those of you not familiar with their Kaiju style wrestling shows, here is a quick taster.

Once you get past the fact that your watching a film about a giant wrestling squid, there is still a lot to enjoy here, as Kawasaki makes it more about wacky brawls and even works the love triangle between the Kanichi and his former girlfriend Miyako and her fiancé and Kanichi’s rival Koji, which not only seems plausible (somehow, though still not sure how) but also says all kinds of things about Miyako, who apparently has no problem with her former lover now being a giant squid, but instead seems more about how he will support her financially, especially when combined with the numerous flashes of a naked Miyako frolicking with the Squid form of Kanichi, but hey whatever works for you right?
Still it’s not all random brawls and questionable romances, as Kawasaki includes many simple and effective sequences, such as Calamari meditating, going shopping and generally being a hero of the local towns folk, as his popularity only continues to grow, with these scenes only adding to the human element of the film and despite the fact that he’s a giant squid you still can’t help but feel for his plight, which certainly isn’t the easiest thing to portray, when the costume only allows the minimum amount of movement and an expressionless face, but certainly something that Kawasaki is no stranger to, having started out directing episodes of “Ultraman Tiga” and it’s these early years of his career which really come into play here, as he uses all the tricks he learned there to great effect here, as he sets out to create his own set of equally memorable characters.

Despite some solid strong style wrestling sequences which open the film, Kawasaki soon trades these for wacky oversized creature smack downs, heavily reminisant of the Godzilla movies only on a slightly less city destroying scale and despite having the hindrance of some extremely rubbery costumes, he still manages to make these fight sequences highly entertaining if at the same time an acquired taste, as those of you who are not fans of the brawls seen in the Godzilla films, will no doubt find yourselves more irritated than amused, but then you will no have no have tuned out by the time, the first of these truly random scenes appears. Still despite this you can still feel the love which Kawasaki has for wrestling, while giving nods to the frequently ludicrous and exaggerated nature of the sport.
This film is really a reminder of how fun and imaginative Asian cinema can be, especially when you start looking outside of the main releases and instead look at the ones which fall outside of the popular genres and directors. So if your looking for something truly random, then this film certainly fits the bill, while providing more than a few laughs without overstaying it's welcome with a tight running time, while for those of you still wanting more, I'd highly recommend "Kabuto-O Beetle" for even more wrestling madness.
Posted by Elwood Jones at 07:04