F Is For Fulltime Killer 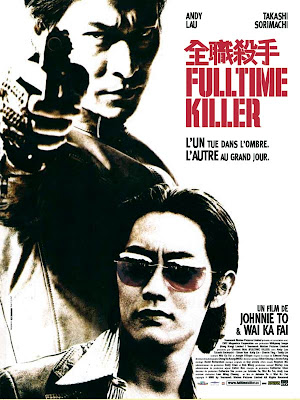 Plot: O (Sorimachi) for many years has been the number one Assassin, living an isolated life and caring only for his work. However his life is soon thrown into turmoil by the appearance of the flamboyant Tok (Lau), who is keen to take O’s place as the number one assassin.

Review: After the watching the subtle “Election”, it’s hard to really imagine that the same director, could also have directed this film, which is essentially the polar opposite with Director To teaming up with Wai to create a very traditional Hong Kong style action movie, meaning that countless rounds are fired without a single reload taking place, while every attempt is being made to emphasise the action taking place, as bullet holes create huge crimson splatters and even kneecaps explode in one glorious bullet strewn ballet of violence, while also in many ways coming across as almost like an homage to Hollywood action movies, with the numerous nods it contains, including an extremely obvious one to “Point Break” (1991) during one of Tok’s showboating styled assassinations, yet at the same time it still retains the charm and style of an Hong Kong action film, which at the same time it bares so many of the trademarks of, especially the more overblown the action scenes become.

Complete opposites of each other the two assassins are each interesting to watch as they go about their chosen career, with O the unanimous king of killers going about his work with a cold disregard for human life, as especially highlighted during the opening sequence when he is forced to kill an old school friend, after they witness him carrying out a hit, which he calmly disregards any feelings of guilt, seeing it as just another aspect of his work, while only truly showing any emotion, when it comes to his ongoing obsession with his housekeeper Chin (Lin) whose friend was O’s previous housekeeper, whom he'd failed to save after she was caught up in a murder plot against O, somthing which continues to haunt him as he now lives in minimalist apartment across from what he potrays to be his real apartment, spending his evening spying on Chin as she carries out her housekeeping chores.
Meanwhile Tok on the other hand gets much more of a kick out his work, drawing inspiration for his hits from the action movies he adores, while also dropping constant references in the conversations he has, including comparing Chin to Emu from “Crying Freeman” (1988), which is honestly a pretty accurate description, seeing how she is the typical good girl attracted to the mysterious bad man, as Tok charms her while questionably hanging around the video store she works in wearing a variety of rubber president masks, yet for some unexplained reason this random seduction technique pays off, rather than her doing the more rationale and realistic thing of calling the cops on his wacky ass. Still Lau certainly seems to have fun playing a more theatrical character than he usually associated with playing, sporting a red leather jacket and a manical grin as he carries out his movie inspired hits, all while caring little for anything resembling subtlty.

Meanwhile on the side of the so called good guys we have the Interpol Agent Lee (Yam), who has become obsessed with capturing the two assassins, which only grows the more intense the rivalry between O and Tok becomes, yet the questionable shift in focus onto his character towards the end is slightly questionable, though Yam is still on great form here, for what is essentially a supporting role to add some sense of morality to proceedings and generally fill in the gaps to O and Tok’s personal histories, in particular highlighting an unusual weakness in Tok who suffers from epilepsy and something that To uses to great effect during several key sequences and certainly brings something original to the film, much like the action sequences which are all exciting and visually stunning to watch, which each one seemingly aiming to top the last as it builds to the climatic firework factory showdown.

While it might come off as all flash and little character development, it still makes for a fun time, with the only characterisation really proving filler for the next action scene, while characters are given enough depth to rise above being simple cut outs, while To avoids going into any real depth with any of his characters, preferring it would seem to focus more on the action and keeping the plot moving at a brisk pace, which might not sit with the more snobbish of movie goers and true the plot of assassin versus assassin and the woman that comes between them, has been seen numerous times before, but it still makes for a great companion piece to the other great films of John Woo and Ringo Lam, whose work this film rightfully deserve a place amongst.
Posted by Elwood Jones at 03:31