G Is For Godzilla 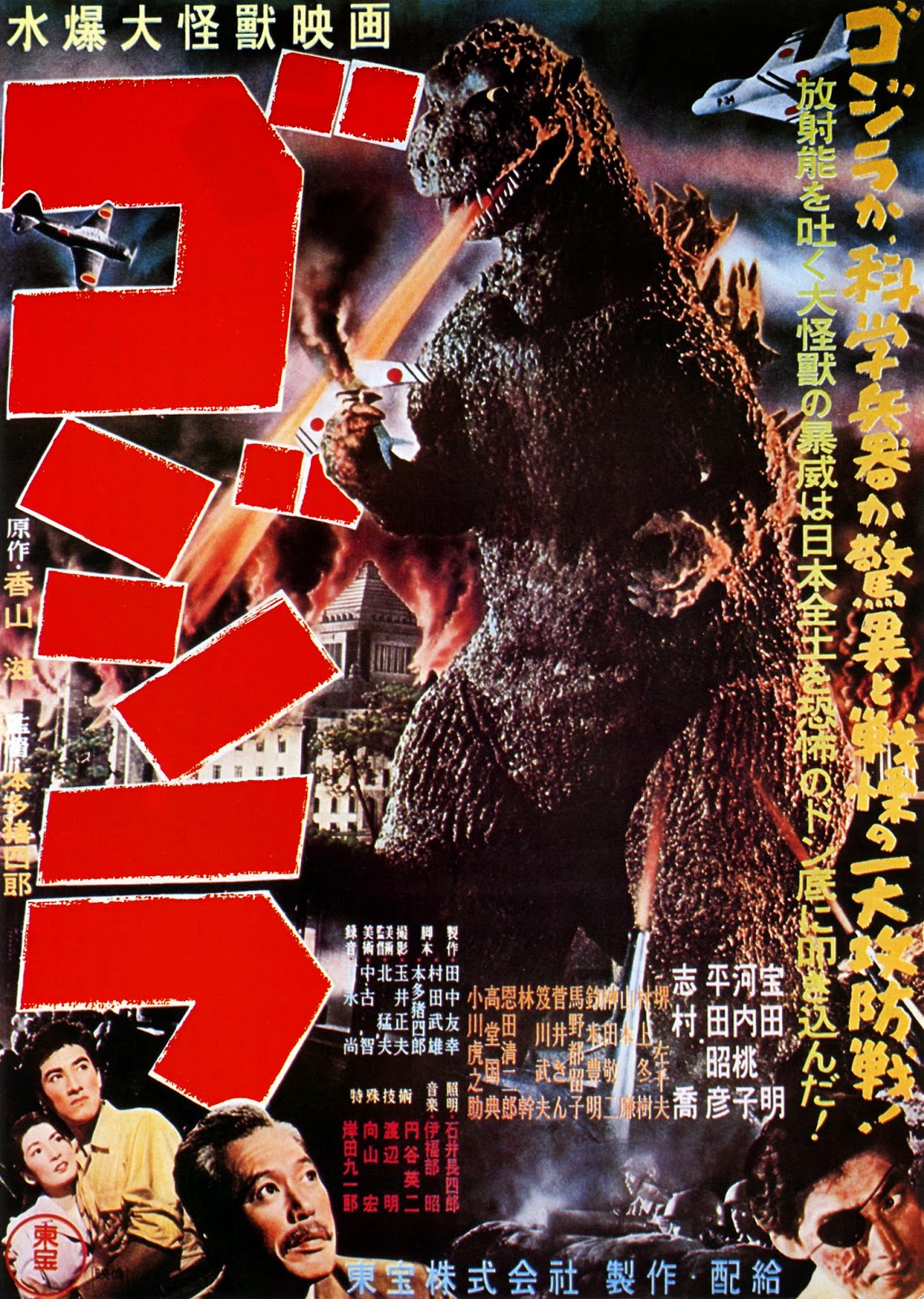 Plot: After several ships sink mysteriously, the authorities first believe this to have been caused by underwater volcanoes or unexploded mines. Soon however it is noticed that the attacks are all close to Oda Island whose inhabitants believe the attacks to have been caused by a mythical creature known to them as “Godzilla” (Nakajima). After the creature comes ashore a team consisting of palaeontologist Professor Yemani (Shimura), his daughter Emiko (Kôchi), the brilliant scientist Doctor Serizawa (Hirata) and Navy diver Hideto (Takarada) who is also involved with Emiko despite her being betrothed to Doctor Serizawa. Soon however the team discover the monster has set a course for Japan and must be stopped at all costs.

Review: I knew right from the start when I set down to compile the list of the films, which would make up this alphabetical jaunt through Asian cinema, that Godzilla would certainly appear at some point and not only were the Godzilla films, responsible for sparking my love affair with Asian cinema, but also as I now sit down to write this latest entry “The Big G” is currently celebrating his 56th birthday, with his popularity having never seemingly waned over the years since he took his first stroll through Tokyo, with Director Ryûhei Kitamura (Versus [2000]), who directed the final Godzilla film “Godzilla: Final Wars” (2004) describing the honour of directing a Godzilla film, to be equal to a British director being asked to direct a James Bond movie, which might seem surprising especially when the general opinion of the Godzilla films, is that they are camp cheesy fun in which giant creatures engage in monster sized smack downs while destroying most of Tokyo in the process, something which certainly became the norm for the majority of the film in the series and certainly a far cry from the sober and occasionally harrowing view of Japan reacting to an attack by a giant monster, which this first film essentially is though if I was going to feature any film from the saga in this list, I knew that the original film would definitely be the one which would be making the list.

It almost seems accidental that “Godzilla” was even made, especially seeing how Producer and "Godzilla Father" Tomoyuki Tanaka, had originally planned a film based on the true life story of a Japanese fishing boat that had become contaminated after sailing into American Nuclear testing waters and only making this film after he was forced to cancel that project. Still this film still contains several ideas, which were carried across and which can be seen mainly in the opening scenes in which we see a fishing boat catch on fire and sink, while a white light glows below. meanwhile the design for Godzilla drew heavily inspiration from “The Beast From 20,000 Fathoms (1953), even though before the final iconic design was chosen, he was also envisioned as being both a giant octopus aswell as a cross between a whale and a gorilla, ideas which were thankfully scrapped, even though special effects artist and fellow “Godzilla Father” (the other two Godzilla fathers being Director Honda and composer Akira Ifukube) Eiji Tsuburaya would get to use his giant octopus design in later Toho productions, which was affectionately named Oodako and who can be seen in both “King Kong Vs. Godzilla” (1962) and “Baragon Vs. Frankenstein” (1965), while also narrowly missing out on being featured in “Godzilla: Final Wars” (2004) alongside numerous memorable monsters, which had populated the series including bizarrely enough the American Godzilla.

Opening with the raw first attempt of a roar for Godzilla, it is truly a goosebumps moment especially when it is followed quickly by the opening strains of Ifukube’s now legendary “Godzilla March”, before throwing us head first into the action, as we are barely into the film before ships are mysteriously sinking and chaos is erupting the screen, while being denied even a glimpse of the monster, which surprisingly Honda doesn’t keep hidden till the end, showing us the monster pretty early on, but saving all his full length shots till the rampage sequence, which is an interesting move and all the more surprisingly pays off. Still director Honda really proves to be the man responsible for Godzilla spawning such a legacy, as he shoots the film with a serious tone, rather than just creating another fun camp monster film, carefully planning his shots as he keeps the shoots the footage of Godzilla to low shots to help emphasis Godzilla’s size, while showing also showing the Tokyo rampage as being full of confusion and chaos as Tokyo burns, with these scenes also including a particularly harrowing scene of a widow holding her children close to her, while rubble rains down around them and only driving home the sense of destruction further with footage of mass choral chanting from schoolchild praying for the souls of the city residents and field hospitals attending to the masses of injured which is something which would certainly not be seen in later films and which unlike the Collateral Damage loving “Gamera” movies, would even go as far as to show footage of the Tokyo citizens escaping to special monster proof underground bunkers. Honda would continue this respectful way of introducing the Toho monsters, when it came to the debuts of “Mothra” (1961) and “Rodan” (1956), which certainly not as dark in tone as this film, still managed to capture the sheer size of these creations, being famously quoted as saying


"Monsters are born too tall, too strong, too heavy, that is their tragedy,"


These words alone would fully justify Honda's passion for giving each of the creation a personality, rather than letting them become just another monster on the rampage kinds of movie, even if like Godzilla, their later appearances would be on a much lighter note, it's also clear that Honda was not opposed to the films taking on a lighter tone, seeing how he would go on to direct a further eight entries in the series, with his final film as a director being "Terror of Mechagodzilla" (1975) which would also be the final film in the Showa era of films, which amount to over half of the total Godzilla movies made.

Despite “Godzilla” having the titular role, he really is pushed to the background for the majority of the film, much like the shark in "Jaws" (1975) as Honda like Spielberg instead chooses to create a more character driven film, as the authorities argue between themselves as they attempt to find the best way of protecting Tokyo from this new dangerous threat, with the most interesting of these characters being the tormented eye patch wearing scientist Serizawa, who having created the oxygen destroyer is now racked with guilt over it’s creation, knowing how easily it could be used as a weapon of mass destruction, refusing to revel it’s existence even though it is the one weapon that could stop Godzilla. Surprisingly the lack of city stomping action does not take away from the film and although the roles would be reversed in later films, as the stories became more far fetched and the focus shifted from the cast, who would usually be caught up in some increasingly random situation, usually involving aliens of some description, while audiences turned out to see the latest monster smack down, with the films generally taking on a lighter tone.

“Godzilla” is still without a doubt still an important film, for not only the sequels it spawned, or the imitators which followed in it’s wake, but for proving that you could infact make a giant monster movie and keep a serious tone and although I love the more campy entries, this film still stands as a fantastic piece of cinema, which far exceeds the expectations of what a giant monster movie could be.
Posted by Elwood Jones at 22:00