Voyage To The Planet of Prehistoric Women 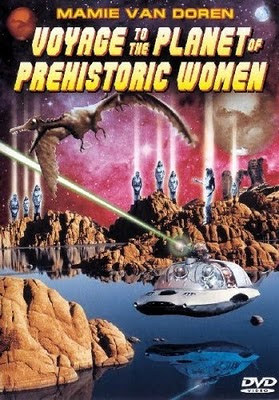 Review: Sitting down to watch this film I would be lying if the synopsis (shown above) which showed on the TV guide, didn’t hold some appeal and honestly I wasn’t expecting anything much from this film, above it perhaps being a fun camp B-movie, only to find myself sadly disappointed in pretty much the same way I was after watching “Bride of the Gorilla” (1951). Okay that might be a little harsh, especially as it certainly wasn’t as bad as that film and this disappointment, seemed to stem mainly for how nothing really happens, with the film quickly boiling down a handful of interesting sequences, which are then sloppily edited together, though this could also largely stem from the fact that the film originally started out as the Russian sci-fi romp “Planeta Bur” (1962), only to be dubbed and edited for the American market, under the title “Voyage to the Prehistoric Planet” with additional footage of Basil Rathbone and Faith Domergue being inserted, in a similar way that footage of Raymond Blurr as an American reporter was inserted into the American release of “Godzilla” (1956) with Blurr bizarrely enough reprising this role (with added Psychic powers) in the hideous American cut of “The Return of Godzilla” (1984) released as “Godzilla 1985” (1985). The footage from “Voyage to the Prehistoric Planet” has now been edited into this film, removing the footage of Rathbone and Domergue and replacing it with footage of the scantily clad inhabitants of Venus, while Director Bogdanovich provides a running narration, portraying one of the cosmonauts, recollecting the whole adventure, while also throwing in footage from fellow space oddity “Nebo Zovyot” (1960) which also suffered some creative editing, as it was turned into “Battle Beyond The Sun” (1960) by then aspiring young director Francis Ford Coppola, working under the pseudonym “Thomas Colchart”. No doubt the borrowing of footage from this film, is yet another attempt to add some meat to the picture and maybe convince the audience that they are not just paying to see the same film, just now with added hot chicks.

The plot of this film it can safely be said is almost as skimpy as the actresses are dressed, with the Cosmonauts on a rescue mission to locate two of their missing comrades who have crashed onto the planet, encountering when they get there, a wide variety of strange alien life, however due to the film being a mismash of mixed footage they never actually meet the titular Prehistoric women (bummer), though seeing how they butcher anything that they come into contact with, it was probably for the best, seeing how intergalactic genocide, hardly spells out good times.
Still this film does feature some classic sci-fi design work, with the Cosmonaut suits having that great goldfish bowl design while their version of “Robbie the Robot” known simply as John, not only looking a lot more impressive than Robbie, but also proving handier, than just being able to source booze on obscure planets and providing general comic relief. The other noteworthy point about this team is their space car, which I’m yet to figure out how they managed the really convincing hover effects; no honestly it really has me stumped.

The Prehistoric women, who for some reason are never given an actual name don’t really contribute a great deal to the film, as they lounge around on the rocky beach, communicating telepathically with other, while occasionally pretending to be mermaids when Bogdanovich, feels the audience might be getting tired of watching them do the same thing, while their telepathic nature which seems to stretch soles to just communicating with each other, bizarrely enough actually works to the films advantage,even more so when you can see how these girls seems to find just doing the limited amount of tasks they are given challenging enough, without the added hassle of them trying to convincing read their lines. Still their main role it would seem is to react horrified to the actions of Cosmonauts who, unwittingly also manage to kill the pterodactyl type creature which they had been worshiping as a god, though again thanks to the footage mash up, they never actually do anything about this other than grumble about their god being killed, still by the end of the film you get the impression that these girls will pretty much worship anything, they find the slightest bit strange or unusual, making their religious views fluid to say the least.

The soundtrack is quite oddly haunting in this film, especially when combined with the fog covered landscapes, this mixture of choral and howling sounds also being highly reminiscent of the opening theme to “The Devil’s Rain” (1975), which made it only the more surprising to find it used in this film, as it almost feels like most of the footage shown here, that it has been lifted like from another film, yet for some reason it still works, providing the film with a mysterious atmosphere to the film, however at times it does feel kind of intrusive and left me wanting to hear something a little more orchestral, especially during the slight spattering of dramatic moments, which the film has.

The Cosmonaut adventures are fun times even if the added footage just prove to largely distracting throughout, but when these guys are left to get one with encountering strange creatures and exploring the planet, it is largely fun stuff even if their intergalactic diplomacy leave a lot to desired, seeing how they kill anything that they encounter, rather than trying to find out anything about this planet. Still cut away all the extra footage or better yet just watch “Planeta Bur” and it’s like a Saturday morning serial, so I guess it’s the combination of footage from so many places, which left me feeling so disconnected with this film, aswell as the fact it truly feels that it would be more at home, in a double feature as the warm up film ideally followed by one of Doug Mclure’s better films like “Warlords of Atlantis” (1978) or “At the Earths Core (1976), which I guess is probably the best way of watching it, as to watch it one its own, will certainly leave you feeling like something’s missing.
Posted by Elwood Jones at 21:57