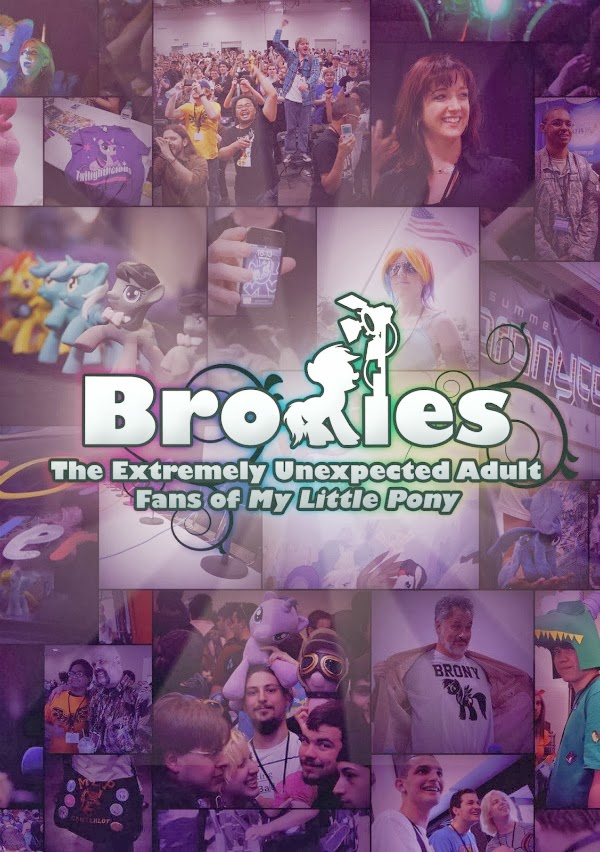 Title: Bronies
Director: Laurent Malaquais
Released: 2012
Plot: Documentary which sets out to meet the Bronies, the adult male fanbase of "My Little Pony: Friendship Is Magic"


Review: Back in 2010 Hasbro was looking to relaunch their iconic “My Little Ponies” line after the success of re-envisioning “Transformers”. This forth generation of ponies would become “My Little Pony: Friendship is Magic”. Okay so far nothing unusual there as franchises as we all know frequently go through changes and revamps over the years following their initial release. What could not be expected would be the popularity of the show with guys aged 13 to 35, a group who would soon come to identify themselves as “Bronies” but one the makes of the show would soon quickly embrace as they brought out a line of merchandise to target these fans. This documentary sets out to meet some of these fans and to find out what it is about these adorable ponies which appeals to them so much, let alone for some of these fans form the basis of their own artistic tributes ranging from artwork through to laser shows and even dance remixes.
“Bronies” or to give the documentary it’s full title “Bronies: The Extremely Unexpected Adult Fans of My Little Pony” started life as a Kickstarter campaign with a modest target of $60,000 and one which it achieved within three days of the campaign. In the end $322,022 had been pledged making it the fourth most funded film project on Kickstarter. As a result of the extra budget the film grew from focusing on the 2012 “BrodyCon” convention to the truly in-depth look at the Bronies phenomenon that it now is.

Narrated by John de Lancie who “Star Trek: The Next Generation” fans will know for his role as “Q” and here keeps a fun tone to the film, especially with his musical interludes where he voices a pony lecturer providing the history elements for the franchise. De Lancie originally became involved with the show when he voiced the character of “Discord” a character who was essentially a send up of “Q”. Dismissing the project inititally as another small role, it would only be months later that he would be caught by surprise when he began receiving e-mails from fans of the show and even more that a lot of them were from full grown men and so marking his first encounter with Bronies.
Rather than going for sheer shock tactics and hunting out oddballs within the Bronie community, the film instead genuinely seems to have been made with the intention of trying to shed light onto these fans and why adult men are so obsessed with a show originally intended for little girls, let alone the fact that it is written and animated with such overwhelming cuteness, that watching it is like being clubbed with a sack of kittens.

Over the course of the film we meet a handful of these fans, all who could be considered to be normal everyday guys.  So here we get to meet a redneck Bronie who proudly displays his pony love on his car, only to soon find himself the target of less open minded locals who decided to trash his car and even pulled a rifle on him after believing his love of the show meant in some way he must also be gay.  The film also goes international to meet a British fan traveling to a UK convention for the first time, having previous put due to suffering from Aspergers, a condition which he also believes the show has helped him with aswell as dealing with society and challenges it presents someone with his condition.

One of the main stories featured here though is of the young teen who enjoys the show but is worried about sharing this love with his conservative father. He of course get his opportunity to expose his father to this world when he takes his parents to “Bronycon” where he also gets help from De Lancie who is sympathetic to the boys’ cause especially when he came from a similar stand point as the father currently views the show from. What follows is a touching series of meetings at the con as the family not only meet with De Lancie who comes off just as nice a guy as he seems in his interviews, while he also introduces the father to the father of another boy whose own father was once in a similarly reserved view point regarding the show.

Aiming to provide a positive overview of the community, the film chooses to gloss over some of the more extreme aspects and warped visions that some fans have chosen to express their love for the series via. In choosing this path the film keeps things fun and upbeat  and ultimately goes a way to proving that just because these guys like a show for little girls does not make them freaks as most would choose to view them. Ironically in researching for this review I did come across a whole heap of Brodies complaining about these aspects not being covered, while generally blasting the film for not representing them correctly which is a view I still can’t get my head around seeing how I left this film with a positive view of their community, if none the wiser as to what it is about the show which hold such appeal with these fans.  I guess this goes to prove once again that you really can’t please everyone.

Overall this is fun and colourful documentary and one which really helps to shed some light on this little known and frequently misunderstood fanbase. Packed with colourful animation, insightful interviews and fun songs, you really get the feel for the show due to being shot in the same style as the show itself, something only further reinforced by the numerous clips also included. So if your curious about the show or just the fanbase in general this is a great place to start while making a curious evening viewing for the rest of us.
Posted by Elwood Jones at 22:14