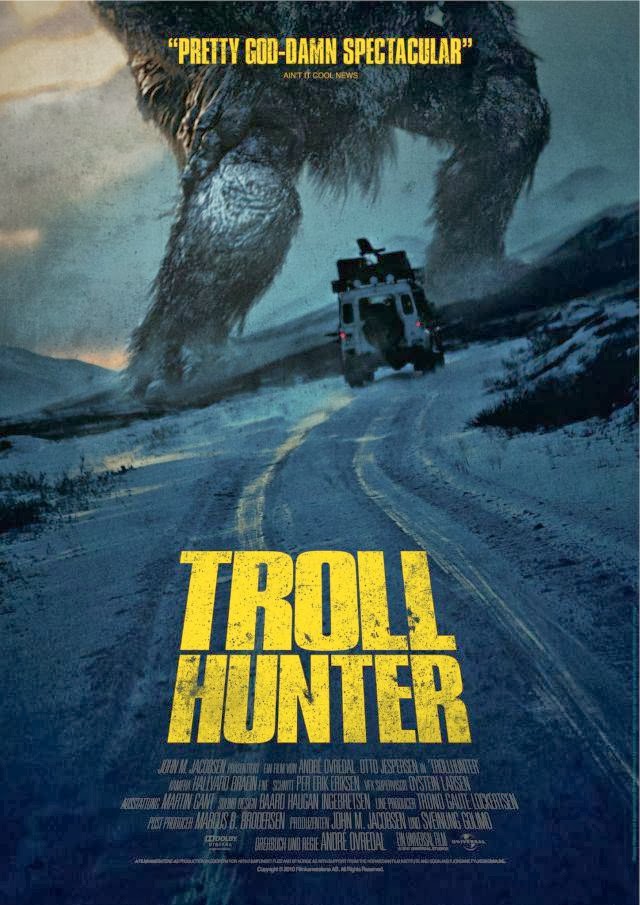 
Plot: Student film makers, Thomas, Johanna and cameraman Kalle are making a documentary about a suspected bear poacher Hans (Jespersen). Soon however they discover what Hans is hunting is not bears but trolls. Following this revelation the group choose to follow Hans as he goes about his work.


Review: When it comes to the found footage genre, I frequently find myself zoning out, especially when so many of the films belonging to this sub-genre seem to be under the impression that fuzzy shots and frantic camera movements give the viewer the illusion of being with the character being followed or that it somehow increases the tension, which is an interesting idea considering how hard it is to be affected by something that the camera can’t even bother to focus on for more than a couple of seconds at a time. This of course is not to say that there havn’t been films which have managed to make the format work with both “The Blair Witch Project” and the original found footage movie “The Last Broadcast” (though some may argue that “Man Bites Dog” is the true owner of this title) being prime examples and now with this film we finally we have another film to challenge my lack of faith in these films.


Shot in a similar style to “Man Bites Dog” and makes it kind of a shame that they didn’t go for a cheeky nod and call this “Man Hunts Troll”. Shot in a documentary style, it is one faithfully maintained throughout aswell as one which proves to be highly effective as the students discover the truth about Hans and soon find themselves joining him as he goes about his work for the Troll Security Agency ensuring that trolls don’t enter into populated areas, something which seems to be happening more regularly Hans reveals and the reasons why he attempts to discover over the course of the film, all the while with the students in tow while still finding time to fill in the gaps as the students hold spontaneous interview sessions between hunts while educating the group on the behaviour and general troll biology.
Hans generally is a great central character, especially as he is played as just another bored government employee who just happens to hunt troll for a living and in many ways bringing back for myself memories of the Masaru Daisato in “Big Man Japan”. Here Øvredal really shows an eye for details, from Hans armoured truck which wouldn’t look out of place in “Mad Max” through to his hunt equipment ranging from the UV lights which cause the trolls to turn to stone or explode (depending on their age)  through to his clunky suit of armour he wheels out when required to get a blood sample from one particularly angry troll. Han’s even has developed his own brand of Troll stink to allow himself and the film crew to disguise themselves, though for some reason nothing can overpower the scent of a Christian which for some reason trolls are especially attracted to. Over the course of the film we also get to meet some of the other members of the Troll security agency such as Finn (Hansen) who is less than happy with the students threatening to expose this secret organisation, while generally covering for troll attacks by making them look like bear attacks.


Another film which is certainly worth noting while drawing comparisons would be “Jurassic Park” which when it comes to the troll footage seems to have been an inspiration, as director Øvredal makes real effort to shot the various species of troll with a style none to dissimilar to a nature film, as especially seen in the first encounter we have with these mythical creatures with said creature being shown majestically making its way through the woods as it tries to locate them with its multiple heads. Here we see none of the usual camera jerking as instead he maintains a sustained and focus camera shot as he tracks the creature, were as most films would shot these same sequences with jerky camera movement and out of focus shots. Its of course these sequences were the strength of the film lies as Øvredal ensures that each troll encounter is memorable building on each encounter to the finale show down with a towering Jotnar troll.


Unsurprisingly the troll sequences form the real highlights of the film with Øvredal showing a keen eye for directing this action, while finding new ways to mix up how he shows each of these sequences, from skilfully cranking up the tension as the group find themselves in a troll infested cave, while their escape in Han’s truck from the Jotnar troll is truly a standout sequence and one which certainly benefits from watching the film on a large screen, especially as it only adds to the visual illusion of riding with the group as they make thier escape.


While the film is unquestionably at its strongest when the trolls are on the screen, or the group are learning more about Hans and his trade, the is still a fair amount of filler especially during the third quarter were we get to see perhaps alittle too much of the unquestionably picturesque Norwegian landscape, but used to such extent it does frequently give the feeling of the film slipping into a video postcard. As such the film perhaps could have benefited from trimming some of this fat of the run time or even another encounter which could have been found during these segments. The film equally suffers with several of its more regionlised moments humour, while the sheer amount of Norwegian comedians rounding out the cast (or so Wikipedia tells me) I have to wonder if this film is funnier to Norwegian audiences than it is to English speaking audiences??


While it might have its flaws there is still fun to be had here, especially as Øvredal goes more for spectacle than scares, but then the found footage genre has hardly been renown for producing such scares. Øvredal through has truly brought his own style to the genre and it is only all the stronger that he chooses to not stick to the established rules of the genre. Ultimately though this is a fun ride while the originally ensure that this is worth giving a curious watch.
Posted by Elwood Jones at 14:50