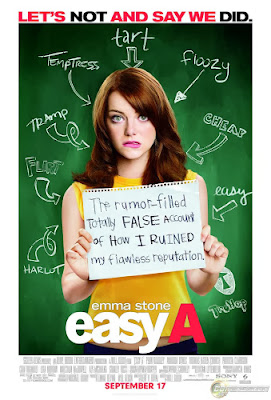 
Plot: Clean cut student Olive (Stone) lies to her best friend Rhiannon (Michalka) about going on a date to get out of a camping trip, which soon escalates to her lying aswell about losing her virginity to a college guy. However when her lie is overheard by the strictly religious Marianne (Bynes), it soon starts to spread around the school while also leading to a surprising new business for Olive


Review: Okay it’s safe to say that when I was working out what to watch this for my review, things weren’t going so great seeing how I been drenched by two jerks driving through puddles beside me on the way home, as well as the stupid blinds falling down again….needless to say it wasn’t the best of times. So hence I decided to finally watching while angry punching the buttons on the Sky+ in hopes of finding something fun and carefree. It is only all the more of a bonus that it also happened to feature Emma Stone


Following in the footsteps of Clueless, 10 Things I Hate About You and Cruel Intentions, this film sees Nathaniel Hawthorne’s “The Scarlett Letter” also getting the high school remake treatment in what was originally intended to be the first part of an interlinking trilogy of films and one which would have seen both “Cyrano de Bergerac” and “The Mystery of Edwin Drood” also being given a similar treatment. As of the time of writing this is still to happen and sadly currently seems unlikely to either. Still as a standalone film this still stands well on its own as Olive not so much reworks the story of Hester Prynne, but instead draws comparison between Hester’s life and her own as their situation especially as both are thrown into turmoil by the rumour of sexual promiscuity.


One big difference here though is that Olive unlike Hester refuses to let her new found reputation as the school tramp persecute her, as she not only starts playing up her fake reputation by dressing more provocatively and proudly displaying a red A (the old symbol adulaters as well as the symbol Hester was branded with) on her clothes as she works it for the added popularity and increase social status it gives her, especially when she helps her gay friend Brandon (Byrd) convince the rest of the school is straight by pretending to sleep with him, an event which soon has her offering a similar service to boys at her school that are hopeless in love to help improve their own social status’s in exchange for money and gifts though while this starts well with her friend Brandon the quality of gifts soon sharply decline in quality, which only makes it all the more amusing to see Olive working her own pricing structure in regards to what a hardware gift card gets someone.
Sadly while the film plays out it’s Scarlett Letter inspired plot well, it sadly throws it away in the last quarter with an unneeded romance between Olive and the school mascot “Woodchuck” Todd played here with grating smugness by Penn Badgley, who I can only guess director Cluck felt came across more hip than he does. It is equally frustrating that the film in places descends into an John Hughes homage, especially with the ending which goes for the grand crescendo of combining elements of The Breakfast Club, Say Anything and Can’t Buy Me Love to nauseating effect and the overwhelming feeling that Cluck couldn’t think of any other way to end it, especially when it doesn’t flow as well as an earlier nod to “Ferris Bueller’s Day Off”. Still these references only continue to baffle further when you consider that she is supposed to be a current 17 year old and honestly I don’t know many kids born in the 90’s / 00’s who really care about these movies held in such high regard by the kids of my own generation who mostly grew up with them, while those playing catch up like myself usually struggle to see what the fuss is about. True Olive is played as being mature for her age, especially as she confidently references the key points of the “The Scarlett Letter” something I doubt most students her age could, let alone will have watched both film versions, even if her comparison and dismissal of the Demi Moore version is great.


Of course the real strength of this film lies with the confident lead performance by Emma Stone, who is every bit the feisty redhead with an equally sharp and witty tongue, which only makes Olive more fun to be around. It is also equally an advantage that Stone is more than capable of providing a frequently humorous narration (something deceptively harder than it seems as Keira Knightly proved as she snarled her way through “Domino”) as she regales the tale of her current situation via webcast complete with handwritten title cards. Equally fun is the support from the more established actors like Thomas Haden Church who appears as a cliché spouting teacher, while Lisa Kudrow takes a break from playing her usual dumb blondes and psycho bitches to instead give us a more neurotic and frantic character as the school guidance councillor who also seems to be frequently justifying her role within the school, as she references one after school session for a student who brought a butter knife to school as she proclaims “It’s a gateway knife”. Both are so much fun here it makes me wonder why they are not seen more.
Sadly such strong support doesn’t extend to her fellow students who are a mixed bag to say the least with Bynes’s fanatical Christian being so over the top that it regularly becomes farcial, but considering how Bynes’s suffered a breakdown which saw her retire from acting after this film it is hard to tell with this knowledge how much of this was planned. Equally unbelievable is Michalka as Olive’s supposive best friend Rhiannon, but never at one point does their friendship seem believable which is only made the more worrying when they are supposed to be best friends which never seems to come across at any point, as instead we are left with a feeling that Rhiannon is someone who has just claimed friendship with Olive rather than anything closer.


It is purely on the strength of Stone’s abilities as an actress that this film is as strong as it is, especially with its artistic licence regarding students and patching supporting cast, let alone the fact she pretty much carries it on her own performance which ultimately makes this a fun and breezy watch and certainly put me in better mood, but then considering how fun Olive is to be around its hardly surprising and the type of role we will see Stone playing more in the future, especially as who doesn’t love a feisty redhead?
Posted by Elwood Jones at 12:57