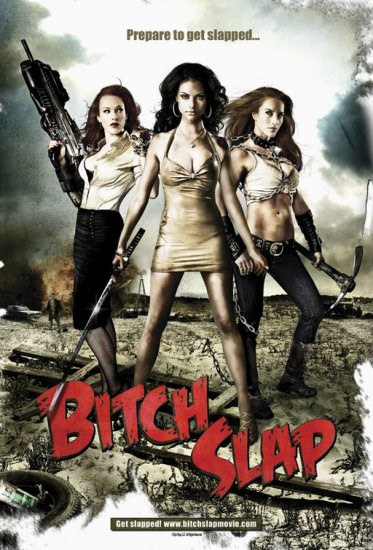 Review: Honestly I was kind of unsure whether I’d get on with “Bitch Slap” especially seeing how it came off in the trailers like an indie remake of Russ Meyer’s “Faster Pussycat Kill Kill” (1965) which although it might not have turned out to be, it is still a film which clearly heavily influenced it’s creation, along with the numerous other films in the exploitation genre, with Meyer’s film (which also featured three tough ladies looking for trouble), clearly being the obvious inspiration and certainly makes it hard not to want to draw comparisons between the two, as Jacobson attempts with this film to make his own mark in the “Neo-Grindhouse” genre, which until now has been the personal playground of Tarantino since he gave the world “Kill Bill” (2003) the film which it could be said started the genre, before being expanding those ideals with his adopted brother Robert Rodriguez with their double feature whammy “Grindhouse” (2007).

It’s pretty clear from the start that this isn’t a film trying to be high art, but instead looking to provide its audience with a fun ride, as it opens with a montage of grindhouse cinema footage making up the opening credits, as it wears its influences proudly on its sleeve, hitting the ground at a breakneck speed that it never lets up for a second, as it quickly churns its self up into a whirlwind of guns, boobs and hyperviolence. Meanwhile characterisation doesn’t really stretch past the cast being turned into caricatures rather than anything resembling realistic characters, but somehow Jacobson has not only found a way of making this work, but he has done to such a degree you never really question it, unless you actually try to think too hard about what your actually watching which no doubt, you won’t be until after the credits have rolled, especially seeing how it moves at such an excitingly brutal pace, leaving you with barely a moment to reflect on what you are actually watching. This is especially helped by how each of these oddball characters are not only unique, but fun to watch with certainly no attempt at keeping things subtle, especially with characters drafted in from the Tarantino School of characterisation, with the supporting cast of characters including the killer Yo Yo welding Kinki (Noji) and the sleazy club owner Gage (Hurst), while the most fun is definitely are our trio of feisty femmes, who are not only a colourful bunch, embodying the femine character ideals of Russ Meyer by not only proving fiercely independent, but also more than capable of holding their own in a fight, as they are more than happy to prove throughout, with Zoe Bell on both acting and stunt co-ordinating duties, here helping to create some truly memorable fight scenes, helping the ladies to not only seem powerful, but also at the same time annihilating the traditional idea of a girl fight, as when these ladies brawl it is nothing short of brutal with the final fight sequence especially between Camero and Hal proving a true highlight, especially a one point also providing a whole meaning to the term “Rug Muncher”. Still the backgrounds of each of these ladies have their own interesting background, revelled slowly through the flashbacks and bringing some depth to thier characters and individual motives.

Jacobson is definatly a director used to working on a budget, especially with his background being based in television and straight to video efforts, yet he appears to have turned this experience to his advantage here, as realising that his budget wouldn’t stretch to multiple sets, instead heavily uses green screen to provide these additional sets, especially seeing how these additional sets are only required for the flashback sequences, shoting the footage, in a similar style to the old FMV games that you used to find on the PC, which despite claiming they were like playing a movie, somhow never quite lived up to this claim, yet when used to provide the flashback sequences, which these green screen scenes makes up, they have a real retro charm to them, while also allowing Jacobson to create a sin city esq world, layered with sleaze and greed, were violence is the city’s heartbeat, while the current day action is kept to it’s sole desert location.

The main problem which “Bitch Slap” has is that it suffers from constantly drawing comparisons to its source material, while perhaps not bringing enough of it’s own original ideas to the proceedings with so many of the ideas it explores all having an air of familiarity to them, especially to fans of the exploitation genre, who are the ones more likely at the same time to get this film, while folks not familiar with the genre it can come across a little over the top. Still I found it fantastic fun and care free film, which isn’t about high brow entertainment, but instead about having fun even more so when your not trying to make too much sense of what your actually watching, as this is another great entry in the Neo-Grindhouse genre, drenched in ultra violence, sex and foul language, but then I doubt it would have worked any other way.
Posted by Elwood Jones at 05:35