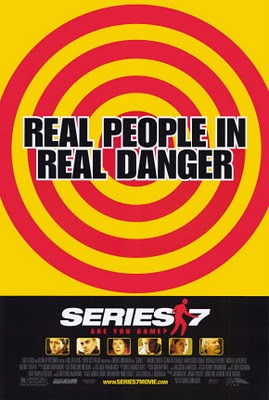 Plot: The Contenders is the ultimate reality TV show, were six people are picked at random by a social security number lottery, before being given a gun and forced to hunt each other down, while the cameras follow their every move. Dawn (Smith) is the currently reigning champion, having won two seasons already and only needs to win one more season to be set free, but at eight months pregnant and faced with having to hunt down her high school sweet heart Jeff (Fitzgerald). will she be able to survive this final game.

Review: Maybe it’s because I’ve been watching “The Hills” marathon most of this week on MTV (It’s more to do with there being nothing else on, than watching out of any kind of necessity), which urged me to dig this film out from the collection again, especially seeing how the film is not only shot exactly like a reality TV show, with only the barest of title cards and none of the extensive crew listing which would mark it out as being a film, so it almost feels as if you’ve popped in a pilot taping of a TV show, while the illusion is only added to by having shown in a TV marathon format.
On it’s original release it was over looked, mainly due to reality TV not being as much of a cash cow, with reality TV only in it’s infant stages, which probably explains why I found it to be a much more effective film now than I did when I first watched it, though bizarrely enough, “Series 7” originally started as an idea for TV back in 1998, when director Minaham pitched it as a fake reality TV concept, only for one TV Executive to return to Minaham asking “Can it be more sexy and less violent?”. Still it was the experience gained by working on a reality TV show which inspired Minaham to pen the film in the first place.

The contestants (or contenders as they are known) are a real mixed bunch, who Dawn has standing between her and freedom, including student Lindsey (Wever), retired conspiracy nut Franklin (Venture), ER nurse and possible angel of death Connie (Burke), the cocaine snorting unemployed asbestos remover Anthony (Kaycheck) and of course her high school sweetheart Jeff, who is also dying of testicular cancer.
Each of these contestants are very different from each other and also have their own way of attending to the task they been given, as the film constantly switches between the camera crews following each of them, with Lindsey being driven around by her family values driven parents, giving her pep talks before sending her off to kill, while Dawn takes great delight in driving to the houses of her fellow contenders and taunting them over the phone. The camera crews also acting as a source of confession, as we learn more about each of them, though a mixture of their conversations with their cameraman, creating such great moments as Lindsey talking about her boyfriend buying her a bulletproof vest, with a sense of nievity, as if he’d just bought her flowers almost unaware of the danger she is in, or Connie talking about her work in a busy ER, which constantly alludes to her darker side. These are also added to though the info bursts, which randomly appear accompanied by the dry commentary of the show narrator (Arnett), who also comments on the action, while never allowing himself to show any emotion towards any of the contestants and their actions, almost as if he is passed being shocked by the things he has seen the contenders do to each other.
The fact that all of the contenders are played by unknowns really helps, with the tension and in many cases, provides a number of nasty shocks, especially when contenders you expected to be with the show to the end, suddenly meet a grisly death at the hands of one of their other contenders, much like the general public it would seem with their occasional interactions with the contenders, who take on it would seem a similar level of fame, achieved by reality TV contestants, seen in a brief scene of a maternity nurse asking Dawn to sign her scan photos of Dawn's baby.

Despite all of the contenders being given a standard handgun by the production team, surprisingly enough none of the contenders actually use this weapon, with the deaths seen here all pretty original including a savage beating to death and lethal injection both making an appearance and certainly pushing the film past my expectations, of what I expected to see, having originally expected a film heavy on shootouts, which are absent outside of the pot-shots contenders occasionally take at each other, with several of the deaths even proving quite disturbing to watch, even for a veteran of movie violence like myself, with each death being stripped down to it’s basics with the reality TV style camera work being used, with what your not seeing only adding to the imagery you are seeing. It’s in this perticular aspect that Connie really steps into her own, having been introduced as a timid character, she is soon proving more than willing to do what it takes to get the job done, never quite slipping into a psychotic state but instead reducing her world view into a more black and white state, seeing justification in everything she does and only showing weakness when this new world she has created for herself, is confronted by her duties as a nurse to actually save lives rather than taking them away, but it would seem even this has been infused with her own personal beliefs even before the show started.

The past which Jeff and Dawn share does take over a major part of the film, while also glancing at the issue of euthanasia, seeing how Jeff is using the show as a way to for him to escape his life dominated with fighting his terminal cancer. Still their back story in a way slowed down the film a little to much for me, but that could also be down the to use of “Love will tear us apart” by Joy Division which made this scene kind of drag for me, especially as I’ve never been the biggest fan of that band (New Order were okay though). Still these scenes are not without purpose, adding not only the love interest aspect to the show (something which is certainly a popular reality TV theme) but also helping to drive the story onwards, as you’re confronted with the prospect of Dawn killing her high school sweetheart, who she very clearly still cares for much to the resentment of Jeff’s current wife.

“Series 7” makes for an interesting study of reality TV and what lengths it can be stretched to provide the audience with an ever more real experience and even though, this idea has certainly been done before, with films like “The Running Man” (1987), it still manages to carve out it’s own unique and fresh way of presenting the idea, while clearly showing that the addictive like influence that these shows can have, as it ends with a trailer for series 8, an idea which was thankfully never followed up, leaving this film an undiluted study, even if Minaham choose to return to directing TV rather than features, its almost a teasingly glimpse of someone who could have been the next big visionary director, along side the likes of Gondry and Jonze, instead leaving this as his sole feature credit and no doubt a film which will continue to be looked at, as each new generation of critics and cinema junkies hunt it out.
Posted by Elwood Jones at 00:37