The One I Would Save: Cpl Ferro (Aliens)

Recently Bryce over at “Things That Don’t Suck” wrote a great piece on why he would have saved Cheryl from “The Evil Dead”, who he rightfully points out probably didn’t get the greatest deal, when it came to horror victims seeing how she is not only raped by the trees surrounding the cabin, but also possessed by a demon, thrown in a fire, dumped in the cellar, before escaping and receiving further punishment as she is stabbed and shot, before finally exploding in a mixture of stop motion animation and pie filling.
Still when it comes to saving any character, for myself it will always boil down to one character time and time again and that person is the ice cool drop ship pilot Cpl. Mira Ferro in “Aliens” (1986).

“Aliens” is not only a great sequel to Ridley Scott’s classic original film “Alien” (1979), but manages to bring another great cast of characters in the form of the Colonial marines, but unlike so many other films these marines are more than just alien chowder, especially when director James Cameron takes the time to showcase each of their individual personalities, so even the lesser marines such as Crowe and Frost become instantly memorable, from the more standout members of the team such as the tough as nails Vasquez or cowardly Hudson.
Ferro is essentially one of the supporting marines seeing how she is the drop ship pilot, yet every scene she appears 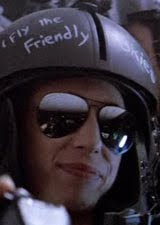 just oozes her ice cool demeanour, while giving the saga another tough female capable of standing on a level ground with even Vasquez who it appears to have a mutual respect for Ferro, which is certainly nothing to do rank, seeing how she shows a constant disregard for Lt. Gorman.
Seriously there is no moment in the film were she seems the slightest part fazed by the situation breaking out around her, as her fellow marines break under blind terror and panic, of thier first encounter with the Xenomorphs, which resulted largely in them either setting thier fellow marines ablaze, getting jumped in the dark or just basically firing at anything that moves, yet despite this she still keeps her focus with the mission at hand, which it could be argued is largely down to the fact she spends the whole of her time in the film with the drop ship, while being forced to hang out with her remedial co-pilot Spunkmeyer. Despite this when she sadly meets her end via way of a stowaway alien; she is still quick to react, by going for her pistol yet proving sadly a little to slow for the speedy Xenomorph.

Maybe I’m a little biased with my obsession with this character, seeing how she is after all played by the very lovely Collette Hiller, (who from what I have heard from those lucky SOBS who have caught her, on one of her rare convention appearances have told me) but Ferro remains a great character, who perhaps I wish had lasted just a little longer than she did and it’s kind of frustrating that she is not listed as one of the top choices when it comes to naming favourite marines, with most of the fanboy and girls more likely to name Hicks or Hudson as their favourite, though if I could save any character it would without a doubt be her.
Posted by Elwood Jones at 14:11