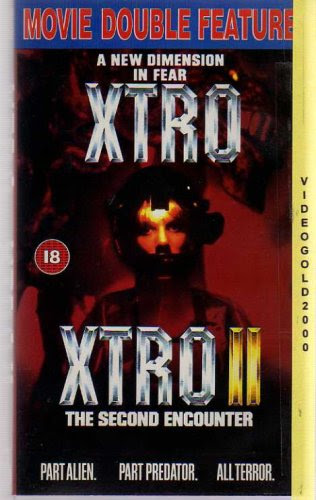 Rating: 3 / 5
Plot: The Nexus project has been created with the goal of creating a way to travel through dimensions. During the first jump, communication is lost with the team, during which time sole survivor Marshall (Westerholm) returns through the gate, unknown to the Nexus team infected with an alien species, which promptly escapes forcing the facility into lockdown leaving a small team of scientists and four heavily armed mercenaries to combat this new threat to humanity.

Review: Nostalgia can be a strange thing, with so many things, turning out to not be as essential as we might like to remember them, when looked back at through the nostalgia goggles, this is especially true when it comes to revisiting the numerous films which populated my childhood, which this film actually wasn’t one of, but still somehow managed to ingrain itself into my subconscious.
I first encountered this film, at my local video shop called “The video bug” which is sadly no longer there, having closed down about five years ago. I originally hung out there, as a way of playing the latest PS1 / N64 games, which I had no way of affording on what little money I earned from my paper round. What was special about this particular video store, was the fact that they never threw out any of their VHS tapes, which would usually happen with the other video stores, who threw out old titles to make room for newer titles, were as at the video bug they simply put in more bookcases, to store their ever increasing collection of films, which really had a lot to do with the owner being such a cheap skate, that he really wanted to make sure he got the most use out of the tapes, hanging onto them even when they started to stock DVD’s.
The advantage of this meant that you could go there and rent any number of the obscure and often long forgotten films, a lot still in their original big boxes. You have to remember that this was the 90’s and long before online rentals killed off these stores and seeing how I lived in a small costal town, this was the best way for me to see all the classic 70’s & 80’s horror films, which I’d heard about normally from the kids with more liberal parents when it came to what they allowed them to watch. However being a bit of a wuss when it came to gore I missed out on a lot of titles, normally satisfying my curiosity by looking at the backs of the various films and soaking in the various gory and violent images, but knowing that the majority of them I’d never really rent. It was here that I first encountered this film, whose cover stuck with me and was one of the titles; I’d wished I’d picked up when the store was selling off all their stock. Still while I was looking for ideas for titles to write about here on the blog I remembered this film and was suddenly over come with the obsession of tracking it down, even more so after watching the trailer, which also contains a bizarrely memorable theme, which even now is still stuck in my head.

The original “Xtro” (1982) spawned quite a cult following, mainly due to its brief status on the BBFC video nasty list, thanks to a memorable graphic scene involving a woman giving birth to a fully grown man. I’ve yet to watch it, but honestly you don’t have to have seen it to watch this film, as it is merely a sequel in name only, which appears to be a running theme with the series, as apparently “Xtro 3: Watch the Skies” (1995) has nothing to do with either of these films either, which is supposedly down to Director Davenport only securing the rights to the name and not the story rights, making this in more of a cash in on the popularity of the original, than any attempt in continuing the storyline.

It’s clear quite early on that the plot is heavily borrowed from “Aliens” (prepare to here this film being mentioned a lot in this review) which is not only quite an achievement for a film with four writers, but also something that is frequently picked up upon by pretty much anyone who has seen this film, but then this isn’t just giving the occasional nod here and there, but rather tearing huge scenes and reworking them into the film, with the most glaring scenes being the chase through the ventilation, the smart gun used by the merc’s and even the shoulder cameras using the same film stock as that used in “Aliens” though of course the most standout, having to be Davenports take on the chestburster sequence, which is almost shot for shot the same, bar the fact that its Marshall writhing around on a table by herself, rather than being surround by her fellow scientists.

Thankfully once the alien changes into it’s fully grown form, it at least looks original, even though we never get to see the creature in it’s full glory, thanks to some horrible lighting, which drowns the majority of the scenes it appears in dank darkness, which might build tension, but its pretty much wasted if you can’t see what the hell is going on. Sadly the majority of the effects are equally poorly handled, with kills nearly all happening off screen followed quickly by shots of fake blood being thrown at the walls, as the creature leaves blood covered husks of it’s victims, which is quite random for a creature which is supposed to be draining the moisture from it’s victims I’d have expected them to be looking more like grey dried out husks. Still as long as the monster doesn’t move it looks impressive enough, with it’s sluggish movements making zombies look speedy in comparison, which made me wonder how it actually managed to catch anything, as it shuffled around the deserted hallways bumping off the more disposable members of the cast.
The main question I did find myself asking, while watching this film, was what the mercenaries have against inanimate objects, especially seeing how they are seen frequently firing off countless rounds at ventilation shafts, the walls and pretty much any location the monster is supposed to be, but never once actually hitting the darn thing, they are supposed to be aiming for.

The characters are interesting enough, though it is clear that this cast were assembled on a budget, especially looking at the majority of the scientists working at the facility are decidedly average looking at best. Our hero on a budget Sheppard (Vincent) is quite watchable, despite director Davenport having to reportedly shout the lines to Vincent who didn’t bother to read the script, as his character references the incident in Texas constantly, while not actually bothering to let the rest of us actually know what happened, while Buckman steps up as the tough female scientist Dr. Casserly, even though by the time she steps up to this mantle she is yet another “Aliens” character rip off, as she comes off like a slightly less tough version of Ripley.
The most noteworthy appearance amongst the cast though is Nicolas Lea, who would go on to play Krycek in “The X Files” (one of the best characters in the series despite, what my wife might want to wrongly claim) and here can be seen here playing the bargain basement version of Hicks, while Koslo is fun as Dr. Summerfield the token arsehole, though it’s a role I would have loved to have seen Michael Rooker taking on, especially for the later scenes which see an infected Summerfield mutating rapidly into an alien human hybrid, while seriously cranking up the crazy factor. Meanwhile the rest of the cast, whose characters don’t resemble copies of characters from “Aliens” are quickly lumped into roles which require the minimum amount of character development (the wiseass, the jerk) and pretty much marking themselves as characters not worth getting attached to.

It might not have been a film worth obsessing over for as long as I did, but it is still an entertaining enough film to enjoy even if it does linger in places around the ass end of okay, while ripping of “Aliens” whenever given the chance, but then isn’t this what “The Asylum” have spent the last few years doing, making this film almost a blueprint for their output ethic.
Posted by Elwood Jones at 15:00