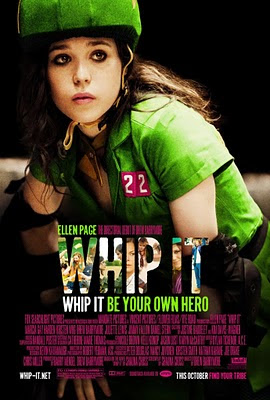 Rating: 2 / 5
Plot: Regular beauty pageant contestant Bliss (Page) is tired of her small town Texas life, especially being continually forced to compete in pageants by her mother (Harden). After discovering roller derby, she suddenly finds a new lust for life, as she begins skating for local derby team “The Hurl Scouts” under her new identity Babe Ruthless.

Review: Ever since Ellen Page pulled the indie double whammy of appearing in both “Hard Candy” (2005) and “Juno” (2007) she has been an actress whose films I tend to look forward to and this film was no different, especially seeing how it seemed for the trailer to combine the wit of Juno with the brutality and excitement of roller derby, which was also another big draw for this film, being a big fan of Roller Derby, despite the severe lack of derby teams that we have over here in the UK..... but then who doesn’t like the idea of hot punk chicks on skates?!?
The other plus this film had going for it, definitely has to be the involvement of former derby skater Shauna Cross, who wrote the original novel based on her experience on the derby circuit, aswell as adapting it into the screenplay here, bringing a certain level of authenticity to the script, which is appreciated especially seeing how sports movies are notoriously tricky creatures, with the main failings coming from the inability to replicate the same feelings and emotions associated with the sport in focus.
Sadly despite these two pluses, this is a film which falls seriously flat, proving to be a crushing disappointment, which I found even more so being a derby fan, especially as I was especially looking forward to finally getting to a great derby movie which this film really isn’t.

The subject matter of rebelling against the norm and breaking out, is certainly an obvious choice for the directorial debut of the former wild child Barrymore, though without a director with a firm grip on her reigns, she is here free to be as kooky and oddball as she wants, ultimatly meaning that she is responsible for providing one of the most irritating characters in the film “Smashley Simpson”, spending every moment she is on screen, mumbling unintelligible dialogue and overacting pretty much every scene she appears in, which thankfully is kept to a minimum. Still other supporting members of the cast fair a lot better such as stuntwoman / actress Zoe Bell turning up as “Bloody Holly” and giving another laid back performance, which it’s true might not be much of a stretch from her acting debut in “Death Proof” (2007), but doesn’t at the same time leaving her standing out, much like the brief but fun cameo by Har Mar Superstar, who shows up as the coach of the “Fight Attendants”, which could also be said of Jimmy Fallon’s role as the loud mouth announcer Johnny “Hot Tub” Rocket”, who provides various random insights as part of his sole commentry of each match.
The most noteworthy performance here though is courtesy of Juliette Lewis as “Iron Maven” who takes a special dislike to Bliss, seeing her as a threat to her top spot status and Lewis clearly relishes taking on one of the few meaty roles on offer, as she manages to be both brutal on the track, as she is with her bitchy words of the track.
Sadly Ellen Page despite still giving a good performance and remaining an actress to watch, here comes across bored, as she almost shuffles through her lines despite the trailer coming across like Juno on wheels, “Whip it” is sadly a far cry from the witty observations of Diablo Cody’s Oscar winning script and in a way it appears that the script is perhaps trying too hard to corner the indie youth market, by giving us an alternative rom-com, which is an area that it especially fails hard in, as the love interest, Skinny indie kid in a band Oliver (Pigg) provides almost as many grating moments as Barrymore, as I found myself having to endure the supposedly hip dialogue between Bliss and Oliver, which comes off more stale than anything, with almost zero chemistry between either Page or Pigg, meaning that your listening to Bliss pining after him, but from Page’s performance, you get more the feeling that she really doesn’t care, which could almost be summed up by the limp wristed slap to the face, she dishes out after discovering Oliver’s cheating ways, while at the same time also working against the tough girl image she’s been developing since joining the Hurl Scouts, which see’s her standing up the same preppy girls who are seen tormenting her at the start of this film and by the time this limp wristed slap is dished out, it kind of left me thinking why bother? I mean I would have much preferred she punch him out, or at least give it some gusto, than such a weak excuse for a slap.

Soundtrack wise it is a pretty sad state of affairs with the majority of the soundtrack, made up of dreary sounding indie tunes, with the few standout tracks, all being well known tracks by established bands like Radiohead, MGMT and The Breeders and these soundtrack choices, kind of came of a surprise seeing how grounded in the roots of punk rock the derby scene is, I was expecting more of a punk soundtrack than laidback indie, which really doesn’t work and feels like another attempt to be hip, much like the frequent references to Austin resident Daniel Johnson which pop up in the film, rather than providing anything resembling a suitable soundtrack, makinh the experience feel like your watching the film with the radio on at the same time.

“Whip it” is a film which sorely disappointed me, especially having all the build up as being something fun and different, but sadly beneath all it’s wannabe indie cool and stick on tattoos, it is just a pretty simple by the numbers coming of age flick, with a slightly interesting angle, provided by being set in the world of Roller Derby, which is sadly under used with Barrymore more keen to focus on the world outside of the derby ring, than the battles fought on the track, but lacks the sharpness in it’s script to hold the attention, especially when such a large chunk is especially being dedicated to a relationship with a thoroughly unlikeable character, making in turn parts of this film hard to sit though and certainly had me wishing for the power to just cut these scenes completely. I guess in conclusion that the wait for the great derby movie continues, as this really isn’t it, despite what it might seem on the surface.
Posted by Elwood Jones at 14:13