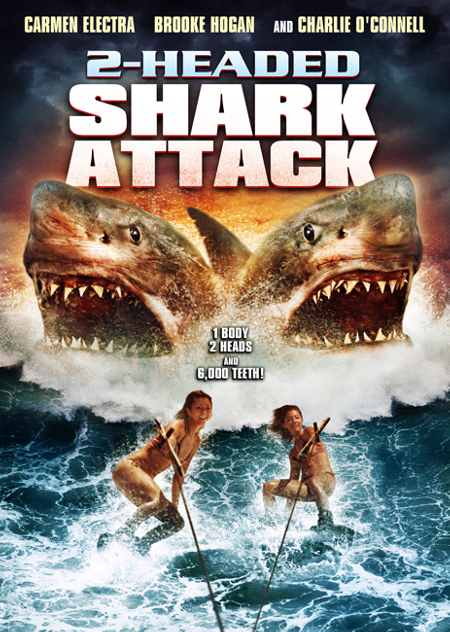 Plot: A group of students are left stranded on a deserted atoll, after their boat is attacked by a mutated two-headed shark. However the atoll is slowly starting to flood and soon none of them will be safe from the double headed terror.


Review: There seems to be something timeless about sharks which have made them the subject of countless movies, all of which have attempt in one way or another to tap into our fear of these perfect killers with the most memorable of these of course being “Jaws” which in many ways could also be blamed for sparking this fear in the first place, scaring most of us (myself included) so that we still ask if it’s safe to go back in the water.

Needless to say since then there has been a constant stream of movies wishing to capture that same fear that “Jaws” encapsulated and it’s unsurprising that this over saturated market has lead to a certain element of artistic license being brought to the shark attack movie, as each new film fights to be noticed in this sea of imtators and hence why we have seen more movies like “Shark Attack 3: Megalodon” and most memorably “Mega Shark Vs. Giant Octopus” being released while certainly pushing the boundaries of plausibility and arguably in their own way leading to this latest mutation of the genre.

Scraping up another seemingly shameless group of no name actors and D-list celebrities, it would seem that “The Asylum” are actually spending more money than per usual with these latest production, especially seeing how I actually recognized who most of the lead actors were, with Carmen Electra being unconvincingly cast as the ship doctor, while we also get Jerry O’Connell’s brother Charlie and Brooke Hogan proving that she is none the more convincing as an actor than her dad was back in the early 90’s! Still this seems a far cry from the usual no names or cult figures that make up their usual casting fodder and even more shocking there is not even a former 80’s pop star in sight here!

The plot is as to be expected from "The Asylum" the usual b-movie nonsense with our scantily clad group making countless random, let alone questionable decisions throughout as it soon become clear that their only real purpose is to provide shark chowder, while our mutated shark surprisingly looks as if they have taken at least some effort with the still admittedly bargain basement CGI with some random shifts in scale throughout, but at least some effort has been made to make the shark look at times pretty decent, while also using a small amount of practical effects for some of the shark attacks, which while limited to just brief shots of it’s head, is still a refreshing change from the usual all CGI attacks which tend to plague most of the recent Shark movies and it only makes it more of a shame that they did not make more use of these effects.

Even more surprising though is that this is one of the few shark movies which actually delivers the goods when it comes to deaths, with the film clocking up an impressive body count, while actually ensuring that the audience get to see some frequently gory (if heavily CGI) death scenes, rather than playing the tease and cutting away at the last second, while what is even more of a rarity for these films is that it actually delivers on it’s promised box art in it’s opening scene, making it perhaps only the second film (the other being "The Beyond") that I could remember doing this. Still the death scenes are all kept within the framework of the plot, rather than just introducing some random nobody to help boost the body count, even though we do get some highly questionable decision making happening throughout such as the scene were the teens now stuck on the atoll find two working speedboats, but rather than trying to find a way off the island, instead use them for an impromptu speedboat race, let alone the fact that the shark is trying to sink the atoll by simply knocking against it.

This lack of disposable characters, however does not still mean that we get a huge amount of characterisation with Electra as the questionably qualified doctor spending the whole film sunbathing, while most of the teen cast are on the whole largely interchangeable with each other, with only a few select members of this group being given any kind of character other than “loud shouty teen” or "dumb jock", though perhaps the standout amongst this group being Cole (Ward), who is also the closest the film gets to actually having a bad guy, who not spends most of the film hitting on any random female in sight and flexing his muscles, but also has the ultimate asshole moment, when he literally jumps ship when he figures out that the shark is following the noise of his boats engine.

Helmed by Director Christopher Ray, the son of legendary b-movie Maestro Fred Olen Ray, whose most memorable movie “Hollywood Chainsaw Hookers” Christopher Ray had an uncredited role in as “Kid in bar” and here continues his current partnership with “The Asylum” for whom he previous directed “Mega Shark Vs. Crocosaurus” and “Thor” cash-in  “Almighty Thor”. Thankfully he atleast has the advantage here of being given one of their original features which have frequently proved to be their strongest titles, rather than helming another of their now legendary Mockbusters. Despite this I still got the feeling throughout that Ray would rather be directing “Girls Gone Wild”, especially with the camera always seeming to focus on the boobs of his female cast, especially when they spend pretty much the whole film as skimpily dressed as possible, while unsurprisingly also ensuring that the male cast members are killed off first.

I guess it is impossible to expect high art from a film entitled “2-Headed Shark Attack” and it’s clear that Ray has the sense to realise this and instead focuses here on providing a largely fun movie with a generous amount of on screen carnage, let alone a providing some cheap thrills with its scantily dressed cast whether you want to look at girls in cleavage heavy bikini’s or guys constantly flexing, there is something to suit either taste, especially when this frequently seems to be more were Ray is focusing than on the titular shark, but compared to some of the recent shark efforts this is certainly one of the better ones.
Posted by Elwood Jones at 14:31