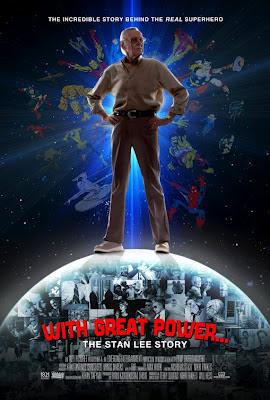 Plot: Documentary about the life and creations of Comic legend Stan Lee.


Review: Even if you know next to nothing about Comics, there is still a very good chance that you still know who Stan Lee is, especially as he is arguably as well known as his creations and certainly with good reason, as without a doubt Stan Lee has done more for comics than any other writer past or present, having created Spider-Man, The Incredible Hulk, Fantastic Four, X-Men, Iron Man and Thor, to name but a few of his most popular creations, yet for a man who seemingly single handedily changed the face of comics forever he comes off an incredibly humble man, who is always quick to credit the artists he worked with before taking any kind of credit himself.

It’s only makes it more surprising considering the astonishing body of work he has built up, that we havn’t seen a documentary like this before now and it’s his amazing career which this documentary attempts to chart from his inconspicuous debut with “Captain America Foils the Traitor’s Revenge” back in May 1941 through to present day and the founding of his own production company “Pow! Entertainment” where even at the age of 89 he refuses to retire as he continues to create even more new characters, as he continues to see Retirement as nothing but a dirty word.

Built around a mixture of stock footage and extensive interview footage with Lee, who personally leads the journey through his life, with the occasional input from his wife Joan who also has many of the best lines of the documentary, including her openly confessing that her role in their marriage is to spend Stan’s money, while also providing the insights into his personal life, which Stan doesn’t openly revel himself especially with his focus more on his work than his personal life, but still seeing how open Lee comes across here, it doesn’t leave much but what she does revel does help to create a more full picture of the life of this living legend.

Breaking his career down into decade sized chunks; it makes it an easy ride for the non-established fans to understand why Lee is seen as such an important figure in the comics community, as Lee talks through each break through he made with the help of artists like the equally legendary Jack Kirby, with whom Lee would create nearly all his most memorable creations, when during the 60’s they revolutionized the industry by crafting complex and naturalistic characters, who could have bad tempers, arguments with their fellow superheroes and even worry about things like paying the bills and impressing their girlfriend. This game changer Lee is happy to admit was by pure chance, as at this point he was considering leaving the industry and was inspired by his wife to write the stories he wanted to read, especially as he had nothing to loose seeing how he was planning to leave anyway, only to lead to the creation of his most memorable creations, following the success this style of writing had with the newly created “Fantastic Four”. This period also lead to his creations all making a home for themselves in New York, rather than a traditionally fantastical city like Metropolis or Gotham City. Still the most personal of these new creations would be with “Spider-man” for whom his wife admits is essentially based on Lee himself.

Possibly what has delayed this documentary from being made earlier, could possibly be the sheer lack of scandal in his life, making it reminiscent of Bruce Campbell’s fantastic autobiography “If Chins Could Kill” which was equally as positive as this film is, with the sole dark moment coming from the heartbreak of loosing his second child, days after she was born and while it is not necessarily a huge part of the documentary, it is still a touching scene and one which Lee would rather not talk about, leaving it for his wife to tell much like the majority of the footage concerning his family outside of his wife, whom he clearly adores and happily shares stories from their long lasting marriage including his regret at previously macho comments that his wife would not work while they were married to an argument which lead to her destroying his prized typewriter, all regaled with a great sense of humor which carries throughout the film, as Lee’s life has clearly one lived in good humor.

Unsurprisingly there is a wealth of celebrities all wanting to share their stories about either working with Stan or his creations, with celebrity comic fans Nicolas Cage, Samuel L. Jackson and Kevin Smith are all on hand to give their insights, though only Cage gets to really express his opinions on Lee’s work, which was a shame especially seeing how both Jackson and Smith would no doubt have given a fascinating fanboy angle, but due to the sheer amount of admiring celebrity fans on hand here all eager to express their love for his work that these interviews are noticeably cut down to what amounts to basically sound bites. Still while the film maker have seemingly been given unlimited access, it’s really at the cost of depth for although it’s a fun insight into Lee’s career, there are no real leaps outside of the conversations with Joan to really get inside of his mind for a fuller picture, but it’s not something that is going to leave you feeling unfulfilled and it does still feel like a full portrait of the great man, even if it’s a picture comprised largely of what he has achieved in his career and the parts he played in the revolution of the comic industry and for most of us it is all we need and want to know.
Posted by Elwood Jones at 14:06