Week of Hong: Balls of Fury 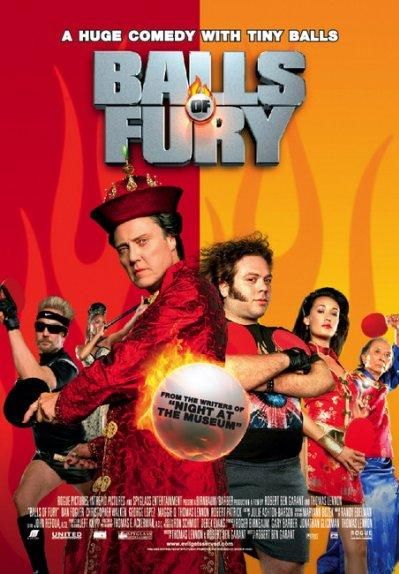 Plot: After losing the world Ping Pong championship as a child prodigy, the Def Leopard loving Randy (Fogler) has spent the last two decades peddling his skills on the Vegas strip to pay the bills with his former glory days now nothing but a distant memory. Now hired by the FBI to enter an underground Ping-Pong tournament in a bid to expose the elusive Feng (Walken), the criminal overlord who was also responsible for the death of Randy’s father (Patrick)

Review: On paper this film seemed to have pretty much everything I could want cast wise, I mean not only does it feature our man of the moment Mr. James Hong who we have been looking at over the course of this week as part of the Week of Hong Blogathon, but it also has Dan Fogler, an actor who I’ve become kind of obsessed with since first seeing him as the Rush obsessed “Hutch” in the Star Wars inspired comedy “Fanboys” aswell as more recently in the equally amusing “Take Me Home Tonight” and I was relishing the chance to see him in a leading role, rather than his usual portly sidekick persona. Sadly this film would prove once again that just because you have all the perfect ingredients it doesn’t always mean that you’re going to come away with a tasty dish of a movie.

Opening at the 1988 Olympic table tennis finals, were the twelve year old Randy is not already working his Def Leopard obsession but also seen as a child prodigy of the sport. However thanks to his father (in a whopping ten minute cameo by Patrick so get your fill X Files fans) betting everything they own on him winning, he soon finds the pressure getting to him and while facing the German champion Karl Wolfschtagg (Lennon) manages to knock himself unconscious, meaning he forfeits the match as a result, while at the same time causing his father to be murdered by Feng’s henchmen (Tagawa) due to not being able to pay his debts and sending Randy’s career into a nosedive as he turns his back on competitive ping pong. It’s during this opening that the tone is really set for the film, as this is anything but a serious look at the world of competitive ping pong (incase you hadn't realized), as it opts for the same surreal look at the sport that both “Dodgeball” and “Beerfest” brought to their sports and things only really get wackier as it continues, hence we get Randy turning the sport into what is possibly the worst cabaret act ever, while numerous demonstrations of super human play, as characters play with lightening fast reflexes and frequently keeping multiple balls in play.

The cast all pretty much play their various roles well, with Fogler embodying the overweight slacker Randy, who despite his obvious lack of any form of athleticism still manages to play the role of this superhuman player convincingly enough, while gaining support on his journey back to his former via the blind ping pong master Wong (Hong), whose training methods are almost as suspect of those used by Xian Chow in “Kickboxer”, as he has Randy trying to hit balls using a wooden spoon and more sadistically locking him in a freezer full of angry bees with possibly the worlds smallest flyswatter.

Joining Randy on his quest for revenge we also have the questionable FBI agent Rodriguez (Lopez) who it would seem has confused the FBI for the CIA / MI6 seeing how he bases his inspiration for joining on fantasies of James Bond exploits. Randy also more surprisingly even gets a love interest in the form of Wong’s niece and protégée Maggie (Maggie Q) who also gets a chance to show off her kung fu skills at various points of the film which is always welcome.

Sadly the weak link in the cast is also one of the biggest draws, as Walken seems to be purely going through the motions with his performance as Feng and while he occasionally shows moments of his normal brilliance, he never seems to know exactly how to play the role, which also brought to mind an interview with Walken I read a few years back, were he admitted to only reading his own lines whenever he was sent a script rather than the whole thing, which might go away to explaining the confused performance here, as well as why he also showed up in “The Country Bears”. The role of Feng, had also originally been the screenwriter Thomas Lennon for him to play, until it was given to Walken while he took on the role of Karl Wolfschtagg, though it only begs the question if this character would have been stronger had Lennon played the role as he had originally intended, even though Lennon is still great fun as the egotistical Wolfschtagg.

Still while Feng might not be the greatest of villains, but he does atleast have some decent support from his lead henchman known simply as Mysterous Asian Man (I’m not kidding they didn’t even bother to give him a name) which see’s Tagawa reusing his epic performance as Shang Tsung from “Mortal Kombat” which works really well and frequently to the point were he is often more intimidating than Feng, so it only makes it more of a shame that like Patton Oswalt he is so underused here and while Feng’s henchwoman the blow pipe welding Mahogany (Tyler), steps up to fill the void it is a presence which is sorely missed once he is removed, though Tyler is not especially hard on the eyes it has to be said and makes more of what would have no doubt otherwise been a less noticeable role.

The Comedy for the first half of the film is solid enough before it hits a horrible lull around the halfway point, from which it never truly recovers. Still with enough jokes being thrown at the screen, it does ensure that the majority of the comedy is more hit than miss, with Fogler proving to be a natural comedic talent, while Hong even manages to make his largely comedic role more enjoyable than you would expect, especially when it plays heavily on the fact his character is blind and hence has him facing the wrong way to talk or just walking into walls, let alone the fact that the film also features a joke based on him not releasing that a Love Courtesan was actually a man, making it only more of a credit to Hong that he manages to make this character work so well. The majority of the comedy here though can be found with Randy’s wacky opponents, which he has to face on the path to Feng, which include a psycho little girl named “Dragon” (Shi) and local champion “Hammer” (Oswalt) who not only can’t break through his own paper banner, while also has an arsenal of confusing hand gestures, though despite his scenes being amongst the funniest this character is bizarrely never seen again after the initial confrontation, frustratingly adding to ongoing list of underused characters within this film.

Even now reflecting on my viewing experience of this film, I can't decide if really enjoyed it enough to watch it again and while it's certainly has it's moments, it's one that's best watched with friends and a laid back atmosphere of low expectation, though it's safe to say that ping pong has never looked cooler....shame the same can't be said for Def Leopard.
Posted by Elwood Jones at 14:47