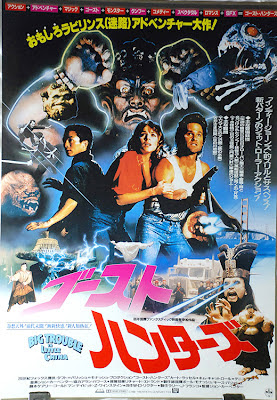 Plot: Jack Burton (Russell) is a wisecracking truck driver making what should have been a regular drop off in San Francisco, only to find himself in a whole heap of trouble when his best friend Wang Chi’s (Dun) fiancée (Pai) is kidnapped, by the 2000 year old magician Lo Pan (Hong).


Review: Seeing how this week is the “Week of Hong” blogathon being run by “Lost Video Archive” paying tribute to the living legend James Hong, who has over the course of his career amassed (as of the time of writing) 366 credits  as an actor, so I thought I would revisit one of his few roles which allowed him to step outside of his usual supporting character roles and instead cast him as the central villain.

Another big film in my childhood celluloid memories, it’s one of the few films from that period which still stand up to those happy early memories when revisited years later, while also certainly being one of my all time favorite John Carpenter movies, in what would be sadly his sole jaunt into the Martial Arts genre, something which had long been a desire for Carpenter before he returned to the horror genre once more. Still any movie which reunites Carpenter and Kurt Russell, can never be a bad thing, especially with Carpenter being responsible for pulling out some of Russell’s most memorable performances, with this film being yet another example of this great working relationship that they have together, especially as Russell was suffering with the flu during filming, yet under Carpenter he still pulls off another amazing performance.

Originally intended to be a western much like Carpenter’s “Assault on Precinct 13”, it was during the rewrites of the original script that the action was shifted to modern day San Francisco, while retaining the Chinese fantasy elements. To enter into this film blind though it starts like nearly every other 80’s action movie with Wang Chi’s fiancee being snatched by the Triad gang “The Lords of Death” at the airport, setting both him and Jack on a mission to get her back. It’s only during a gang fight which Wang Chi’s and Jack suddenly find themselves in the middle off, that things suddenly take a supernatural turn with the sudden introduction of Lo Pan’s henchmen “The Three Storms” (Wong, Kwong & Pax) , which honestly had I not known what sort of film this was in advance, this would make for a surprising change of direction, especially with no hint of this change being given in advance of it happening. Needless to say though that when Carpenter does unleash these supernatural elements he goes the whole hog and hence why we get lighting bolts being welded, a giant centipede monster and insane midair sword fights to name but a few of the delights contained within, as Carpenter once again showcases the excess of 80’s action cinema, while clearly having fun playing with the elements of Hong Kong cinema he chooses to homage here.

“Big Trouble In Little China” is a true memento of 80’s action movies with it’s outlandish action scenes and wisecracking hero in the form Jack Burton who is the quintessential 80’s action hero model, for Jack is a blue collar, sexist and egotistical truck driver with strangely cat like reflexes, who when not giving broadcasting his own personal life philosophies over his truck’s CB radio and chowing down on submarine sandwiches, he can usually be found drinking hard and gambling harder with the local Chinatown traders. Still why he might seem like a jackass, he is still fiercely loyal to his friends, though it’s a loyalty which could also be linked to the fact that those same friends owe him a lot of money which he fully intends on claiming. Still this is essentially were Carpenter throws us abet of a curve ball for while Jack is portrayed as the hero, he is actually more of a bumbling sidekick to Wang Chi, who is much more of the hero here, something especially highlighted when during one of the climatic battles he manages to knock himself unconscious and misses the whole thing.

James Hong is fantastic as the big evil of the film, in what would be a rare lead role for the man who seems to be eternally set to play memorable supporting characters and here he relishes the opportunity, whether under layers of heavy make up as the old man form of Lo Pan, or as his fantastical Fu Manchu form he is brilliant in every scene he appears, while portraying Lo Pan as a man so assure of his own power and ability that he never appears flustered by what is happening around him, to the point were he seems genuinely surprised when he is taken down by Jacks boot knife. It is equally great to see Victor Wong being given more of a role as the Magician and local tour guide Egg Shen, who not only has some of the best lines in the film, but also gets to kick all kinds of ass with his urban ninja army and like Hong it was great to see him getting a more meaty role, as extended screen time for either of these actors is always a welcome thing.

Carpenter’s love of Kung Fu movies is clearly on the screen here, especially with “The Three Storms” being almost a direct copy of “The Lords of Death” from “Lone Wolf and Cub: Baby Cart at the River Styx”, much less how he chooses to shoot these elements of Hong Kong cinema he chooses to incorporate into the film, which is was almost identical to how they would have been shot in those same movies it sets out to homage, with extensive wire work especially being used during the fantastical sword fight during the climax and in doing so gives them a welcome similar sense of style. Needless to say the action is completely over the top, with Carpenter keeping the action constantly moving, making full use of his cast many of whom were genre veterans, with Carter Wong also working as a Martial arts trainer for the Hong Kong Police and it’s an advantage we see used to full effect by Carpenter, while he also pulls out more than a few tricks to surprise even the more established Kung Fu fans and it’s scenes like the ones we see here, which only make it more of shame that he has not since made another movie like this.

Tanking upon it’s initial release, thanks largely to poor marketing by the studio, which would also lead to Carpenter leaving the studio system to concentrate on more independently released films. Needless to say since then it has truly found it’s audience on VHS and later DVD, truly becoming the cult classic it deserved to be and a film which fans still argue over whether it works best on it's own or if it's long overdue a sequel, though personally I'd love to see another Jack Burton adventure, though for now this remains another great one shot adventure.
Posted by Elwood Jones at 13:15