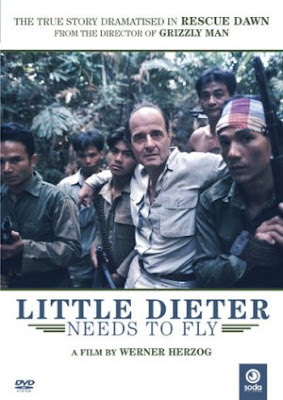 Plot: Documentary about pilot Dieter Dengler, who in 1966 had his plane shot down over Laos, were he was captured and tortured, before finally managing to escape to rescue.

Review: One of two documentaries by Herzog to make the “50 Documentaries To See Before You Die” list with the other being “Grizzly Man”, this film has been on my to watch pile for awhile (like so many of Herzog’s films) and with the forthcoming death row documentary “In The Abyss” set for it’s UK release, I thought it was about time I finally watched it.

In Dengler it is clear from the beginning that Herzog feels he has a kindred spirit, with both growing up in the rubble strewn Germany of World War 2. Dengler also openly confesses that his earliest memories are of Allied bombers destroying village and that during one such attack one of the planes flew so close he was able to see the pilot, sparking in the young Dengler a life long obsession with wanting to fly. Emigrating to America at 18, he is soon enlisted in the Air Force, but frustratingly cannot gain his pilots license and leaves after two years to attend college before then joining the Navy, were he finally gets to complete his flight training before the events of  Feburary 1st 1966, which form the main meat of the story.

To meet the Dengler at the start of the film it is hard to imagine the ordeal he would go through, as he speaks with a constantly positive tone to his voice and always seems to be in an upbeat mood, though the events have clearly left their scars, with Dengler shown constantly opening and closing doors to reinforce his fragile sense of freedom, while also showing Herzog his stores of food which he keeps hidden under the floorboard of his house.

Herzog however is keen to not just do a standard talking head documentary with actors reinacting the events of his capture. Herzog instead uses the documentary as a form of makeshift therapy for Dengler, who seems just as happy to co-operate as Herzog takes Dengler to airfields to sit in planes which also shows the sheer passion that Dengler has for flying before more shockingly taking him back to the jungles of Laos to almost relive various points of his capture by the Pathet Lao, as well as his imprisonment later by the Viet Cong, with each process closely narrated by Dengler. These moments of personal narration Herzog knows are key to the audience getting the full picture of Dengler’s ordeal especially with many of these scenes frequently bringing back some painful memories for Dengler. Frequently he drives himself to frequently to the edges of sheer panic, especially during the scenes were he is lead handcuffed through the jungle, with his additional voice over confessing that he could feel his heart pounding in his chest, during the whole sequence.

Dengler frequently goes into the most indepth details about even the minutest details of his capture and torture, painting an extremely vivid picture about the torture, bugs and disgusting conditions they lived in. Here malnutrition would see them frequently hunting for the rats and snakes which lurked in the faeces covered ground below were they were imprisoned, while this uncomfortable picture only being added to by the exposition piled on by Herzog. Many have criticised this fascination on covering even the smallest of details, were as I found it only made for a more riveting account of what he went through, while Dengler clearly is keen to make the most of this opportunity to exorcise some of his demons which still clearly haunt him years later. Still Dengler does not bare any grudges against the Vietnamese’s people, as he is shown hugging and apologising to one of the villagers who happens to be standing next to him as he tells the story of how he was mentally tortured by one of the guards who tried to take his wedding ring. Still Dengler’s general mindset regarding the events which happened, are very much of that it was a time of war and during war these are things that people do, after all he was there with the purpose of dropping bombs on people.

Dengler’s story would be later remade by Herzog as “Rescue Dawn” with Christian Bale, a clear sign of the impact which the story had upon Herzog, even though Dengler tells the story with such clarity that we do often feels as if we went through the ordeal with him, that at time you feel as if you have gone through it with him, especially as it’s his situation continually goes from bad to worse. Still despite what he went through Dengler still flies today, with Herzog’s narration revealing that he suffered a further three crashes while working as a test pilot and philosophising that “Death did not want him” while ending the documentary in the Aeroplane graveyard in Nevada, which judging by the ecstatic expression on Dengler’s face it truly his own vision of heaven, which is reassuring seeing how Herzog essentially puts him through hell to get there.

A gripping documentary aswell as amazing story of not only survival, there is no doubt that anyone who watches this documentary will find it hard to not be drawn in by Dengler’s story much less won over by his intoxicating lust for life, as Herzog presents a fascinating portrait of an amazing man.

Email ThisBlogThis!Share to TwitterShare to FacebookShare to Pinterest
Labels: 50 Documentaries To See Before You Die, Documentaries, Werner Herzog