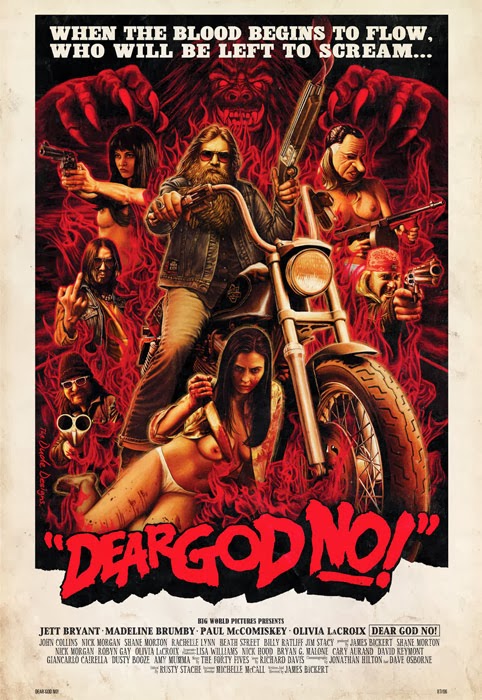 
Plot: The impalers a psychotic group of bikers, lead by the bloodthirsty Jett (Bryant) on the run from their latest run in with rival bikers Satan’s Own stumble across the mountain cabin of Dr. Marco (McComisky).


Review: Ever since Quentin Tarantino and Robert Rodriguez unintentionally launched the Neo-Grindhouse genre with their double feature homage “Grindhouse” (it could be argued that any of their films were equally responsible for spawning this sub-genre) there has been a slew of titles which followed in its wake, all attempting to capture the grindhouse spirit with arguably varied levels from the raw grime of “The Devils Rejects” to the sheer randomness of “Hobo With A Shotgun”. However there are those films which miss the mark completely which is a category which its safe to say this film belongs in.


A truly grating viewing experience to say the least, I don’t think since watching “Deaden” or “The Zombie Diaries” have I found a film as frustrating a this film turned out to be which is really saying something when this feeling hits you a mere five minutes into the film, when you are treated to the members of the impalers riding their bikes alongside the camera and giving the audience the finger, which it seems director Bickert is frequently doing throughout this film as it becomes a black hole of depravity and sheer randomness….and not in a good way before those of you who look for those sorts of things start getting too excited.


One the main issues here though outside of the paper thin plotting is the bombardment of plot devices which Bickert throws into the mix, as not content to make just a biker or home invasion movie, Bickert instead tosses in plot devices left right and centre including a psycho nympho mother (and possible zombie) locked in the basement, Nazi experiments and even a killer sasquatch. The end result unsurprisingly is confused mess as each new element competes for time with the other, while Bickert seemingly assumes that stringing it all together with copious gore and nudity is all that is required to tie it all together, which it soon becomes painfully obvious is not the case.


The cast are forgettable with most seemingly coming from the “The Asylum” school of over acting, while only further hindered by how unlikable or interchangeable their characters are, which is especially the case with the members of the Impalers with whom their leader Jett is the only memorable one and that could be more to do with the striking resemblance to Zak Wilde than anything performance wise. Acting ability it would seem though is on the lower end of the Bickert’s concerns as like Eli Roth his concerns seem to be more with how willing the actresses were to get naked than any kind of acting ability. A theory which is only reinforced by the sheer amount of exposed skin on show here, which no doubt makes this film a favourite of teenage boys. Yes there is a lot of creativity when it comes to the nudity even if it seems to frequently be soley for the reason that Bickert can get away with it, be it via hostages, drug trips or even more bizarrely Nixon mask wearing strippers!?!


The flip side of Bickert’s attention here is clearly on ensuring that he included a healthy gore quota, as he rarely misses the opportunity to include some splatter, providing several of the more memorable moments, such as a shootout with the aforementioned masked strippers while his sasquatch gets the majority of the creative kills including a perhaps unintentionally funny decapitation. The effects unsurprisingly show ambition yet are held back by the budget, while the insistence on showing every gory detail only further plays against the film.


Bickert clearly aiming to recreate the grime and sleaze of the glory days of grindhouse cinema, ultimately misses the mark as while he might pack the film with enough nudity and violence to match the films he is drawing inspiration from, the half-baked plotting and general soulless feel of the film only overwhelm any potential the film has. Needless to say the plotting could equally be helped by Bickert not trying to work so many elements into the film, let alone so frequently shift the genre the film, a trick I have only previously seen work once before in the far superior “Pig Hunt” which memorably frequently shifted genres throughout its runtime, though unlike this film didn’t lose its audience in the process. A sleazy and generally mean spirited film, this is one best avoided, especially when the title no doubt will sum up your feelings about watching it again if you do.
Posted by Elwood Jones at 14:03