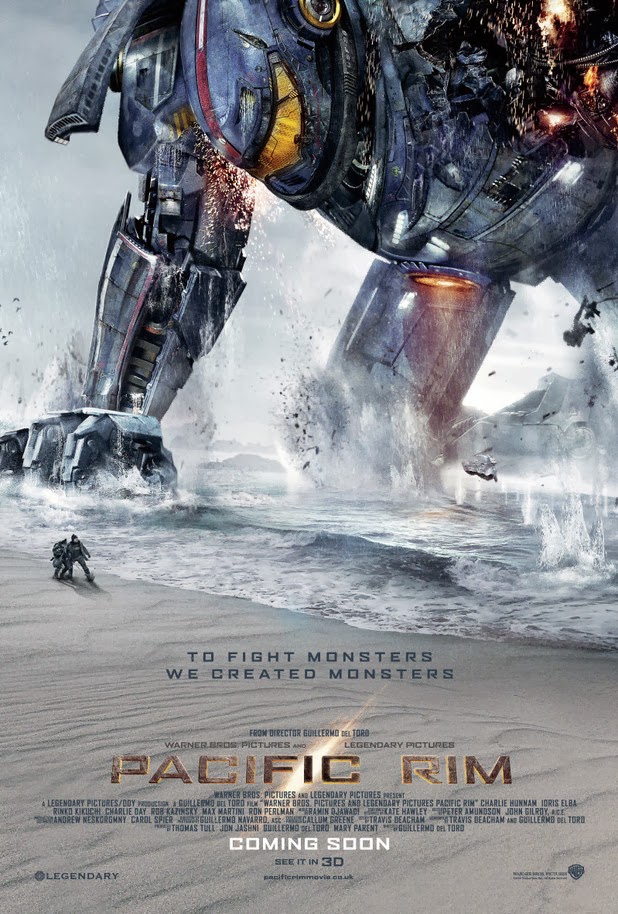 
Plot: When monstrous creatures known as Kaiju start to rise from the sea, the governments of the world come together to construct gigantic robots called Jaegers to combat the threat.


Review: It is no secret that I’m a big fan of Kaiju movies, so needless to say I was excited as always to hear that there was a new addition to the genre being made, while this excitement was only further cranked up to eleven when I found out it was being made by Guillermo del Toro. A highly visual director, time and time again Del Toro has managed to constantly raise the film making bar, both in terms of storytelling and visual effects even more so with his insistence on using old school effects were possible, something which made me especially curious going into this film to see if he could make a film heavily reliant on CGI without losing the same presence his previous films have had.


Born seemingly out of frustration over his adaption of H.P Lovecraft’s “At The Mountains of Madness” del Toro here falls back on his long term love of monsters, wrapped up in a blockbuster format, while at the same time opting to make a much lighter and breezier style of film, rather than following the current trend of aiming for ultra-realism which ultimately plays in the films favour, but then can you really make a sober movie about robots fighting monsters? Unquestionably though del Toro’s love for Kaiju movies is clear here while at the same time he is keen to not emulate the likes of Gamera or Godzilla, as not only seen in the designs of his Kaiju and Jaeger’s but also with his action scenes which fully embrace the freedom of movement and creativity which CGI allow compared to the man in suit limitations of the films which preceded it.  At the same time though interestingly the Kaiju designs still maintain elements of old school Kaiju designs which del Toro clearly loves so much.


Reportedly over one hundred different Kaiju and Jaeger’s were created and eliminated during pre-production, which no doubt would make for a great coffee table book should del Toro ever choose to release them. The chosen designs though are all suitably memorable especially in the case of the Jaeger’s which showcase an evolution of the design from the lumbering mark 1 Cherno Alpha though to the sleeker and more humanoid newer models like Striker Eureka and Raleigh’s own Jaeger Gipsy Danger.


Like the films it homages the plotting is much along the same simple plot lines, as following a disastrous confrontation with a Kaiju which killed his brother and co-pilot, hotshot Jaeger pilot Raleigh (Hunnam) quits the program only to soon find himself drawn back into the fight when Jaeger commander Stacker Pentecost (Elba) devises plan to finally end the war for good. This return of course means that he has to find a new co-pilot which he soon finds in the inexperienced Mako (Kikuchi).  True it is a tried and tested plot but here it is effectively used to tie together the main draw which is of course the monster sized smackdowns.


Needless to say those scenes are the real highlights of the film, with del Toro being free of the restraints that may have held by the old school Kaiju movies, here he gets to unleash some truly memorable brawls on the screen. These sequences are only further helped by the top notch CGI work which thankfully maintains the personality and charm of the old school film held, especially with the Jaegers really coming across like lumbering titans you’d expect them to be. By shooting in CGI del Toro really unleashes his creativity during these scenes, especially during a Hong Kong set brawl which memorably sees a tanker being used a makeshift bat. On the downside though these smackdowns are unfortunately more sporadic than some fans may like, considering how they form the start and latter end of the film, with a lengthy training section between, as Raleigh and Mako attempt to build the required bond required to pilot Jaeger’s, while also trying to work through Mako’s lack of experience which leaves her open to the mental effects the neural bridge can create, which in Mako’s case is flashbacks to a Kaiju attack she survived as a child, which is essentially just an excuse to cram in some more Kaiju action which I can’t say I had any problem with.


On the human side of things, it is a likeable group of characters which del Toro brings together, while at the same time it is very much a comic book style which he chooses to portray them in, hence we get the hyperactive triplets and the bulldog accompanied Australian father and son team of Herc (Martini) and Chuck (Kazinsky) whose canine companion I assumed to be a nod to the British tank commanders of WW2 who frequently were also accompanied by Bulldogs and whose bravado certainly matches that of some of the Jaeger pilots, many seeing themselves as invincible as she embrace the celebrity status that their Kaiju killing skills brings them. Elba meanwhile despite claiming to have studied various politicians such as Barak Obama for the inspiration for his scenery chewing role as Commander Pentecost, which has more in common with Sgt. Apone from “Aliens” than any of the politicians he cited as his inspiration which honestly is no bad thing. This style of characterisation perfectly suits the tone of the film and makes a refreshing change from the current need to ground every comic book or fantastical movie with a sense of reality. Such breaking of the rules only further continues with del Toro refusing to clumsily tack on a romantic sub-plot between Raleigh and Mako, with the two sharing more of a sibling bond than any kind of romantic collection, with a hug being as steamy as things gets between these two.