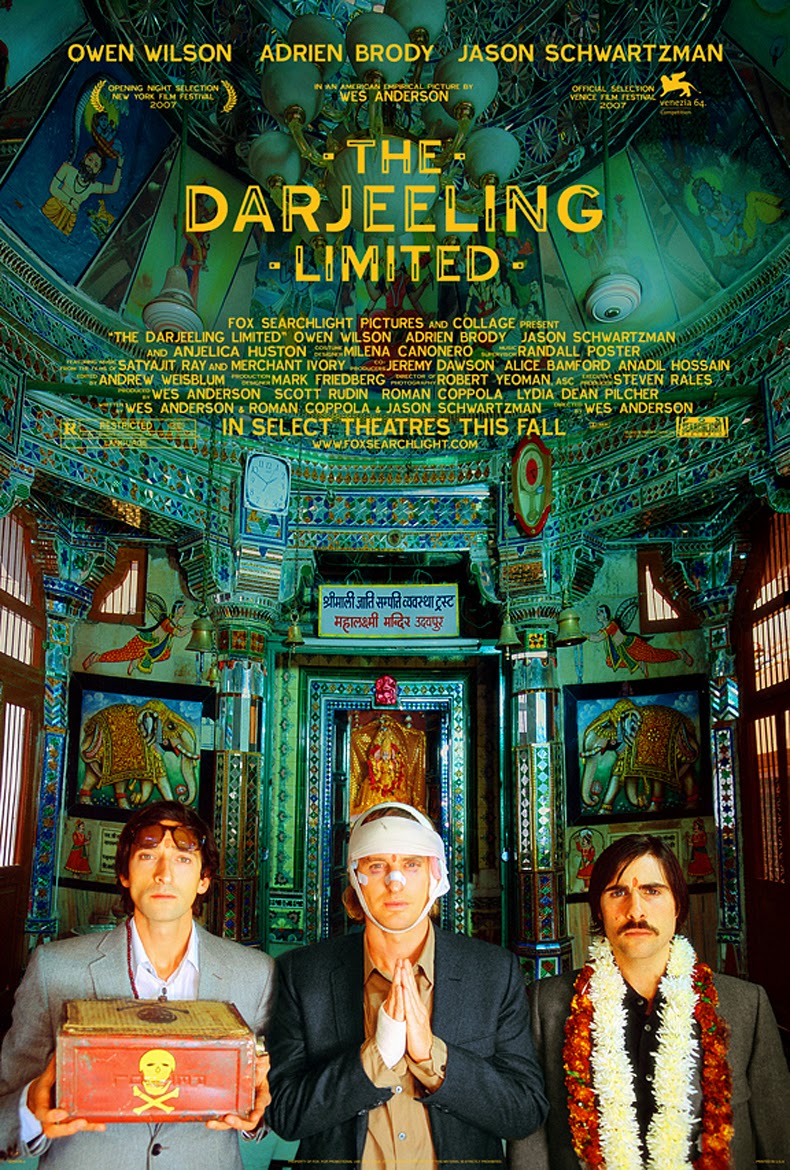 Plot: Three brothers Peter (Brody), Francis (Wilson) and Jack (Schwartzman) who having drifted apart since the last time they were together at their fathers funeral. Now reunited by the oldest brother Francis, they travel across India aboard the luxury train “The Darjeeling Limited” so that they can reunite with their equally estranged mother (Anjelica Huston) who is currently running a convent in the foothills of the Himalayas.

Review: Despite originally being a film which I originally had my reserves about seeing initially, after the first time I saw it I found myself as the end credits rolled with an uncontrollable urge to watch it again. Needless to say it has been a returning feeling every time I have watched this film and even now sitting down to write this review it has me already wanting to dig it out again.

Now don't let the exotic locale distract you as this is still very much Anderson's world, with the three brothers being unquestionably classic Anderson creations let alone equally as eccentric as each other, with Francis having survived a recent near fatal motorcycle accident now sporting a new lease on life (aswell as looking like a badly wrapped mummy), which he is determined to force on his brothers wether they want to embrace it or not, as he plots out a detailed itinerary for their trip, while also stealing their passports to prevent them from abandoning the trip early. Peter meanwhile is trying to deal with the fact his wife is pregnant with their first child, while fearing that his marriage is heading for divorce and to distract himself spends most of his time antagonising his brothers with his claims of being their fathers favourite, while furthering their irritation by keeping many of their father’s possessions for himself. Jack meanwhile is a hopeless romantic obsessively listening to the messages on his ex-girlfriends answer machine, while writing short stories which contain striking similarities to people in his own life.

Anderson regulars Wilson and Schwartzman are once again on great form slipping perfectly into their individual roles, with Anderson once again showing that he is one of the few directors who can capture their quirky charm, rather than turning them into more odd-ballish creations.  Brody meanwhile holds his own well with the strong chemistry between the three actors, being used to powerful effect, especially during the scenes shared solely between these three characters. Meanwhile fellow Anderson regular Bill Murray is reduced to a glorified cameo as an American Businessman who we see chasing after train in slow motion, only to be overtaken by Brody’s Peter in one of the numerous standout sequences to feature throughout the film. Still the inclusion of Murray in the cast really did ask the question as to why?

This film is a prime example of Anderson at his quirky best as the brothers make their way across India, dabbling in local medicines and engaging in unplanned misadventures, while generally arguing, occasionally brawling and even engaging in a spontaneous mace attack as they travel from place to place and occurring the wrath of the train steward (Ahluwalia) who holds little patience for anyone who’d attempt to disrupt the running of the train. What I really love about this film though is that even through the brother go through this journey together, by the end of the film they are none the closer than when they started, with their meeting with their mother being used instead to explain why these characters are like that they are. Equally a much criticised death of a young Indian boy, ensures that the audience is never truly sure of what direction the film is going in, especially with Anderson feeling no reason it would seem to take the most direct routes with his plotting.

Essentially made as a tribute to the films of Satyajit Ray, the film came largely out director Wes Andersons desire to make a film in India, having long held a fascination with the country, while at the same finding inspiration from the Indian documentaries by Louis Malle, as well as Jean Renoir’s “The River” and it’s a love which clearly carries across into the film in much the same way that Sofia Coppola’s (sister to co-writer Roman) love of Japan was evident in “Lost In Translation”. Here nearly every frame of the film is shot to truly capture the flavour of the country, from the panoramic beauty of the landscape to the bustle of the markets, Anderson makes sure that his love for India is truly captured on screen. However Anderson is not using this setting in a touristy way but more a backdrop for his story and seemingly takes every effort to avoid any of the usual clichés and stereotypes which typically dog any film set in such exotic climes and instead aims to surprise the audience, with scenes such as the first time we meet the stewardess Rita who speaks standard English and bares none of the usual cliché stereotypes of the dutiful female, especially when she engages in a spontaneous fling with Jack.

The soundtrack is once again classic Anderson as he combines the retro charms of “The Kinks” and “Peter Sarstedt” as well as using the less well known “Play With Fire” by “The Rolling Stones” to great effect, as he once again gives us a treasure trove of retro tracks, while flavouring with a selection of classical and Indian music tracks from the likes of Satyajit Ray and Ravi Shankar.

While perhaps a little too quirky for the uninitiated, especially with it’s ponderous (but never dull) plotting and especially with Anderson’s refusal to bide by any of the usual road trip movie rules, especially as nothing it ultimately learned by the journeys end and for those finding themselves in this group I would urge them to check out the equally great “Rushmore” for a more gentle introduction to Anderson’s world. However for the established fans, especially for those of you who loved “The Royal Tenenbaums” as he sets out to builds on similar themes which he explored with that film, such as abandonment, sibling relationships and more essentially the non working privileged class. This however is one vision of India your likely to forget anytime soon.

For more Wes Anderson related writing this month make sure you show some love to the nice folks over at "French Toast Sunday" aswell as for other fun film related writings.
Posted by Elwood Jones at 17:12