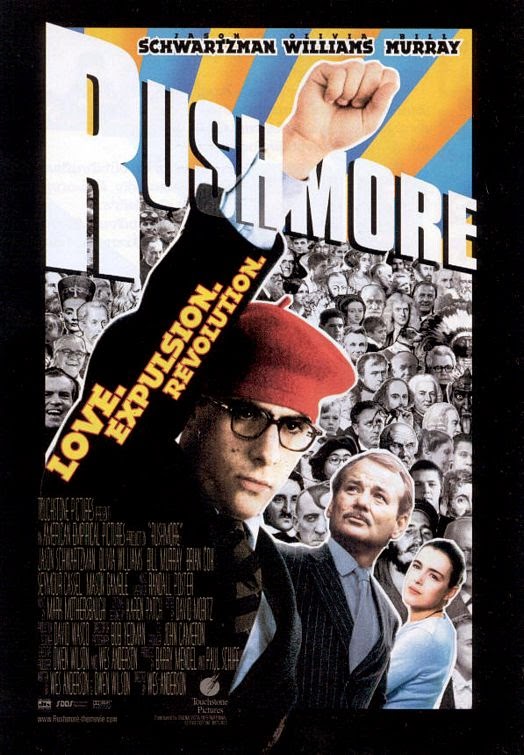 
Plot: Max Fisher (Schwartzman) a 15 year old student at the exclusive private school Rushmore, were despite being involved in every extracurricular activity going while academically failing every one of his classes. Things only become more complicated when he starts an unusual friendship with steel tycoon Herman Blume (Murray) who also has eyes for Miss Cross (Williams) a teacher at Rushmore who Max has been harbouring a crush for.


Review: Sometimes it only takes one film to completely change your opinion of a director, something none truer than with this film, for it was only after I saw it that I finally got what the fuss about Wes Anderson’s films was. Previously to originally watching it I'd written him off as being overrated based on my previous experiences with his work when I watched “The Royal Tenenbaums” and “The Life Aquatic”, both of which I now rate highly after returning to them with a new appreciation for Andersons work which this film gave me. It was with this film that I finally got it.


Easily the most accessible of Anderson's films to date and while it could be argued the same for “Fantastic Mr Fox”, the fact that Andersons’ version differs so much from the source novel, tends to be more of a distraction than some tend to care for. At the same time it still contains all the elements we now see as being the trademarks of his work making it little surprise that some (myself included) confuse it for being his debt which was instead the often overlooked “Bottle Rocket”. Based largely on the life experiences of Anderson who has admitted to sharing Max’s sense of ambition aswell as his lack of academic ability and a crush on an older women, while his co-writer (and reoccurring cast member) Wilson drawing on his own expulsion from school at fate which ultimately also befalls Max on his journey of redemption.


Max really is the quintessential Anderson creation, as he speaks and acts with a mindset years beyond his age, while equally acting every bit the social climber, associating Rushmore as part of his identity even though he got in on a scholarship rather than his parents wealth and status like his fellow pupils. Perhaps because of this it would explain his needs to constantly lie about his background, telling people that his father is a brain surgeon rather than admit that he actually works as a barber. Also because of his mindset Max frequently seems more comfortable around adults than anyone his own age, with the exception his right hand man Dirk (Gamble) and perhaps because of this the unusual love triangle actually works better than you would expect, even if the chances of anything actually happening between Max and Miss Cross is solely in his head. Things of course only escalate when Blume becomes involved with Miss Cross leading to a tit for tat game of revenge between the former friends, as brakes are cut, bees crammed into closets and bicycles run over as each tries to top what the other inflicted on them.


It could be argued that if Miss Cross shot down his first advance that this would be a lot shorter film, but instead she tries to encourage a friendship between them perhaps because of how Max reminds her of her deceased husband. The friendship between Max and Blume is surprisingly more believable perhaps due to the curiosity which Blume has about Max, while for Max it could be equally seen as another aspect of his social climbing, especially when Max is seen taking notes when Blume tries to impart words of wisdom upon the Rushmore students at the start of the film, advising those students who don’t come from money to target those that do.


While their friendship and the effects of this love triangle has on it is largely the focus, Anderson is also keen to chart a more personal journey for Max as he is forced to find himself after his expulsion from Rushmore after an ill-advised attempt to build an aquarium on the school baseball field which forces him back into the public school system with Max’s journey climaxing in the production of his latest play. At the same time it is fascinating to see how Anderson manages to make us root for a character who we should really despise with his frequent lies and egotistical drive,  yet somehow we can help but root for him.


Undoubtedly though the strength of the film is in its casting with Schwartzman embodying the role of Max, a role which Anderson felt at one point could never be cast until a chance introduction by Schwartzman’s cousin Sofia Coppola, who would in turn benefit from the career revival which Murray’s casting received. Murray whose career had in many ways stalled in the wake of “Ed Wood” only to revitalise it with this film, which not only marked the beginning of his frequently collaborations with Anderson which has seen him appear in every film which Anderson has made since. Murray’s involvement in many ways would also play a key part in production not only by his agreement to work for scale, but also by writing to Anderson a blank cheque to cover several shots which Disney who produced the movie refused to fund.


While the film is largely carried by Schwartzman and Murray, with Williams appearing occasionally to stir up emotions in the two men vying for her affections, the film also features numerous colourful supporting characters, such as the surprisingly feisty Margaret Yang (Tanaka), a foul mouthed scot (McCole) and the pipe smoking Rushmore dean Dr. Guggenheim (Cox) who is frequently driven to despair by Max’s antics. These characters and the numerous other who we meet throughout all heightening the film and adding to the already slightly surreal world which Anderson creates here and one which he continues to base the films which followed in.

A perfect starting point for newcomers to Anderson's films while containing enough of his quirks and unique style to still appeal to the established fans. This film heralded and still does even now an fiercely unique voice in independent cinema and is the film I always urge the detractors to watch before they make their final decision on Anderson's films, so if your still scratching your head over his appeal why not give this one a go, you might just find yourself re-evaluating your opinion.

For more Wes Anderson related writing this month make sure you show some love to the nice folks over at "French Toast Sunday" aswell as for other fun film related writings.
Posted by Elwood Jones at 15:03