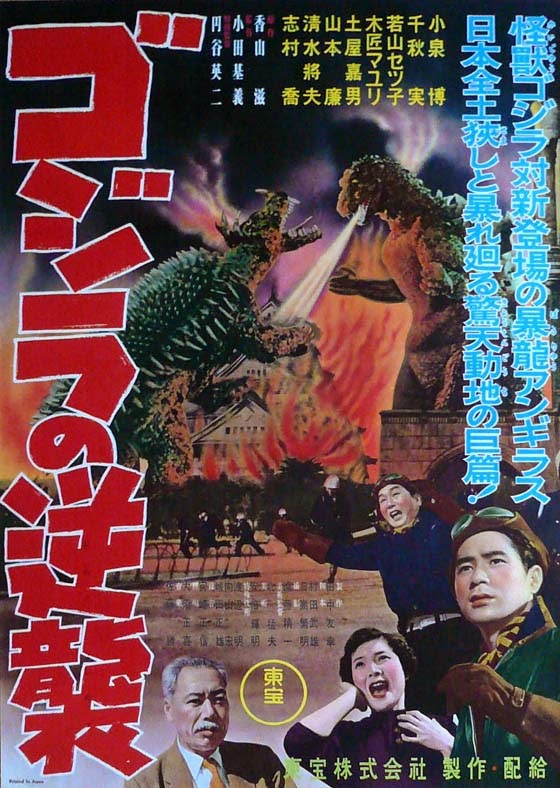 
Plot: Pilots Shoichi and Koji are scouting for schools of fish for the tuna cannery company they work for, when Koji is forced to land near Iwato Island. Here he discovers a another Godzilla in battle with another monster Anguirus, a battle which soon leads them to the shores of Osaka.


Review: With the release of the new “Godzilla” fast approaching what better time to revisit the franchise so to date and look back at the various changes the series has gone through over a staggering thirty films (including both American adaptations). So over the course of the next few reviews which make up this mini feature, I will be looking at films from the each of key eras Showa, Heisei and Millennium, in what will form an annotated overlook at the series to date.


Seeing how I’ve already reviewed the original “Godzilla” the only logical place to start this journey would be with the second film and possibly the least seen by most fans, no doubt more familiar with the films which followed in its wake. Still this film would be one of numerous firsts seeing how it marked the first appearance of my favourite Kaiju creation Anguirus who here would also have the honour of being Godzilla’s first opponent.


Despite being killed in the previous film, Godzilla’s sudden reappearance here thankfully isn’t so much ignored but side stepped, with sole reason being that it is a second Godzilla. Still despite not being the same Godzilla he still has no love for humanity here and still very much on city wrecking form, only this time more the result of his on going battle with Anguirus, who would in the later films become a long term ally, something you’d never expect considering that both monsters are shown to be following the most primal instincts and hence are solely focused on killing each other.


Picking up the directorial reigns from Ishiro Honda, Director Oda a favourite with the Toho bosses due to his reputation for being able to deliver films quickly with his usual work rate seeing him delivering seven films a year for the company, though despite directing over fifty films over the course of his career little is known of his career after 1958, with this film being the only one made to be shown outside of Japan. Like Honda, Oda here chooses a similar style of plotting as he opts to shoot the film completely straight faced, even taking a risk by killing off unexpectedly one of his popular characters. Still considering that this film was in cinemas an astounding six months after the release of the original film, even with the numerous special effects shots req, its safe to say Oda truly lived up to his reputation as a speedy director.


Sadly while the main meat of the film is shot in a similar to style to one used by Honda in the original film, the same cannot be said for the majority of the Godzilla footage which comes off more laughable than with any of the threat that he was shot with in the original. Things only get worse when it comes to the fight scenes between Godzilla and Anguirus who frequently have the same look that you could achieve by battling two action figures together. These scenes are only further hampered by them frequently looking like they have been speeded up, which to Oda’s credit was more accidental due to a camera technician accidently undercranking the camera instead of overcranking it. Kaiju special effects legend Eiji Tsuburaya actually liked the speeded up effect this created and ultimately decided to use the footage in what is certainly one of the more detrimental elements of the film.


Despite this being the first time that Godzilla would get to battle a fellow monster, here it is a far cry from the more familiar monster kung fu antics we’ve come to expect from the series, as instead this is fight is much more animalistic in nature, as the two monsters charge and wrestle each other between dealing out nasty looking bites on each other. It is worth noting aswell that the fight between Godzilla and Anguirus is also one of the longest in the series and despite its more brutal nature still sees another Japanese landmark still getting destroyed in the fray as Osaka Castle suffers the same fate as the Tokyo Tower in a memorable style.


Outside of the main draw of watching Godzilla and Anguirus battling each other this film is also one of the few not to fall back on the usual plot device of “Aliens did it”, here Oda actually takes the time to develop his lead characters which sadly would be the parts of the film to suffer when the film was given its American release, were it was released as “Gigantis the Fire Monster” a butchered cut of this film which attempts to pass itself off as an original film and is really only noteworthy for the early role for George Takei who was part of the team responsible for dubbing it. Still for the completest amongst you, this cut is included on the Region 1 release allowing you to compare the two while at the same time giving you another reason to get a multiregional DVD player., even more so if like myself your based in the UK which for one reason or another has always been overlooked when it came to Godzilla releases, with only a few of the Showa and Heisei films getting a VHS release.

While it might not be on the same level as the original film, there is still enough of the styling carried over to make as an enjoyable experience, especially if your able to get past the questionable fight scenes, but these are of ultimately minor concern when watching the original cut, which honestly is the only way this film should be viewed and while the series might have taken a more fantastical direction for the films which followed, this film only further highlights how well Godzilla can work in realistic setting.
Posted by Elwood Jones at 13:58