A Fistful of Gojira Part 3: Godzilla Vs. Gigan 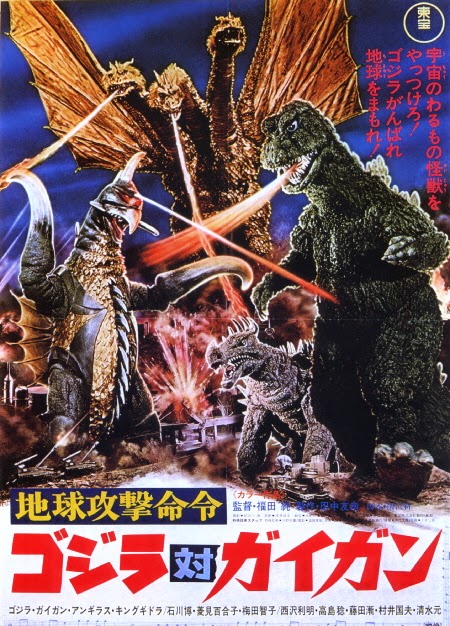 
Plot: Aliens disguising themselves as the creators of the peace-themed theme park Children’s Land have kidnapped a top scientist as part of their plan to take over the world. To ensure their plan goes through they also lure the monsters Gigan and King Ghidorah to Earth via two “Action Signal Tapes” which also lure Godzilla and Anguirus to the park and into a climatic showdown to decide the fate of Earth.

Review: Time now for another of my favourites, though like so many of films in the series the final film would be very different from the original plans for this film which originally started as a direct sequel to “Godzilla Vs. Hedorah”, a plan soon scrapped after producer Tomoyuki Tanaka saw the results of that film, so much so that he told director Yoshimitsu Banno that he had “ruined Godzilla” and subsequently banned him from directing another Toho film again. With this in mind Banno was unquestionably keen to get the series back on track and had planned to do this with a script titled “Godzilla Vs. the Space Monsters: Earth Defence Directive” which would include six monsters (a feat not attempted since the fantastic “Destroy All Monsters”) and would have marked the first appearance of both Gigan and Megalon alongside a third monster called Majin Tuol who would face off against Godzilla, Rodan and Varan. This film would however never make it out of the planning stages, despite an attempt to rework it into a new film titled “The Return of King Ghidorah” the plans would ultimately fall through due to budgeting issues.

Toho Studios never being one to waste a good idea would ultimately salvage parts of that script with this film being the end result, while Megalon would go on to get his own film with the woeful “Godzilla Vs. Megalon”. This film however being greeted with more mixed results with some of the fan base finding issue with some of the more random plot choices which included Godzilla and Anguirus talking. An idea which was either bad or really bad depending on if your watching the original version (speech bubbles) or the dubbed version (questionable voice acting) and while this only happens twice in the film it still irked a lot of fans, even though it would be miles better than the whole Godzilla flying insanity in “Godzilla Vs. Hedorah”.


At this point of the Showa era the Godzilla franchise had firmly settled into its template of monster sized smackdowns as Godzilla faced off against a roster of monsters as the defender of Earth and here it certainly in this respect it doesn’t disappoint as not only does the film feature four of my all-time favourite monsters, especially with Anguirus who honestly they have yet to beat though both Gigan and Mecha-King Ghidorah would come close. This matchup is only added to by the fact that this is one of Godzilla’s toughest fights to date even with the backup he receives from Anguirus.


It is as I mentioned in my previous review noteworthy for also being one of the bloodiest as the film shows a level of violence I’ve come to expect more from the “Gamera” series than Godzilla, but while a lot of these scene are savage to watch, they thankfully never darken the general tone of the film. This increase in gore though would be due to Taruyoshi Nakano taking over from special effects legend Eiji Tsuburaya who had been strongly opposed to exposing younger viewers to graphic images. Nakano might have been stepping into big shoes when he took over from Tsuburaya following his death but the special effects standard really doesn’t dip here, even though Nakano was forced to work with a reduced budget, which was ultimately worked around by through the extensive use of stock footage from the previous films which while it might raise grumbles from some of the fans but honestly I didn’t really notice it.


Outside of the monster fun, the plotline is pretty simple with Cartoonist Gengo (Ishikawa) being hired as a concept artist for the theme park only to soon suspect that his new employers are not quite what they seem which being a Godzilla movie they aren’t and in this case Giant shape shifting cockroaches. At the same time of all the alien species which have featured in the series, they are hardly the most involved in their plot seeing how they leave it down to Gigan and King Ghidorah to do most of the work while they hide out in their Godzilla shaped tower complete with a powerful laser cannon. It only makes sense then that their plan is also one of the easiest to foil seeing how they are essentially beaten by a drawing.

Embodying the Showa era this film is a lot of film and the monster fight scenes more than carry the film and serves as one of the better examples of the era, despite being sandwiched between two of the weakest entries. True it might increase the violence and more notably the gore (both things which would be toned down again in the films which followed) but this film still has the same fun nature which defined the films of the Showa era even though it was one of the last films to be made in this era.

Next Time: Godzilla Vs. Biollante - With "The Return of Godzilla" having ushered in the Heisei era along with it a darker vision of Godzilla. Here he is no longer the protector of Earth but instead closer to the monstrous beast he originally was. Now in the second film of the era Godzilla finds himself facing off against his largest opponent to date aswell as one of the few female monsters in the Toho catalogue, the gigantic plant monster Biollante
Posted by Elwood Jones at 12:38