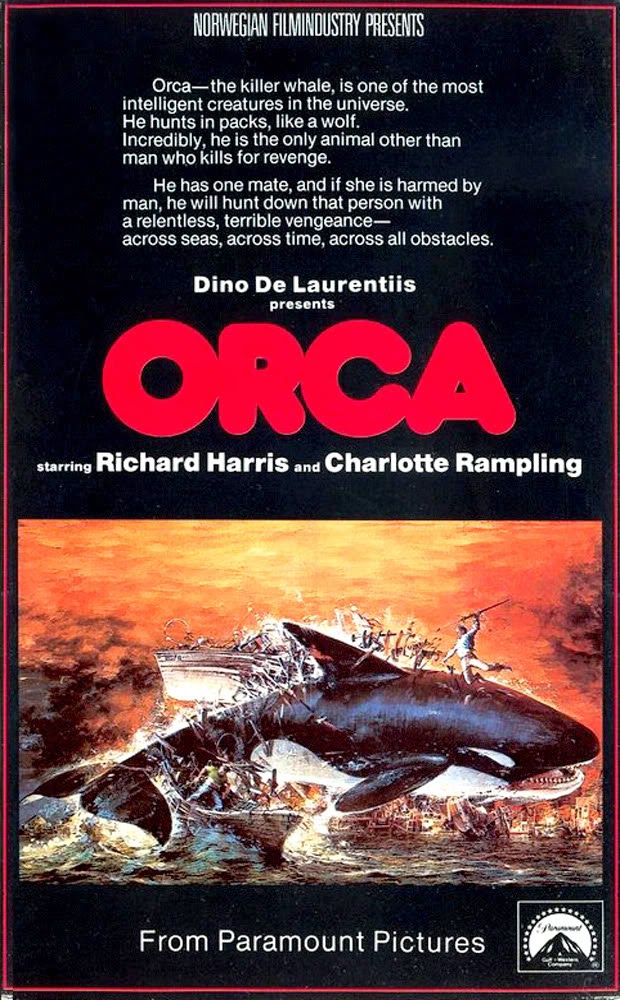 
Plot: Captain Nolan (Harris) and his crew make a living capturing marine animals, however while attempting to capture an Orca he accidently kills the whale which he discovers was pregnant and occurring the wrath of her mate who now sets out to seek revenge against Nolan.


Review: One of the numerous films to come off the back of the success of “Jaws” a trend which continues even today with this being one of the better ones and one of the few to stand on its own, as other the years it has spawned its own cult following. Unquestionably the idea of a killer Orca is an intriguing one especially when most people view these animals like dolphins in the fact that we don’t see them as vicious killers, which is something that couldn’t be further from the truth as is especially the case with Orca which are especially fearsome predators as "Blackfish" only further highlighted to the doubters.

Produced by cult cinema legend Dino De Laurentiis who tasked fellow producer Luciano Vincenzoni to “find a fish tougher and more terrible than the great white” following a late night viewing of “Jaws”. Like De Laurentiis, Vincenzoni knew little about sea life but was soon directed to killer whales by his brother Adriano….I guess the fact that whales are not fish but mammals didn’t ultimately matter now De Laurentiis had his killer. Still if to emphasis the point that here was an animal deadlier than a great white the film features the orcas being introduced by having them attack a great white shark, in a scene were the gauntlet is truly being thrown down and one which would inspire in retaliation the scene of the mauled orca in “Jaws 2”.


Director Anderson though really is another director who really doesn’t get the credit he deserves, especially as he was also responsible for the iconic WW2 war movie “The Dam Busters” let alone cult favourites “Logan’s Run” which he directed prior to this film and the much overlooked “Millennium”. Here again despite being essentially tasked with turning in a “Jaws” cash in still manages to give us something alittle different than the usual go to plot of disposable cast members being picked off  by the titular beastie. Here instead we have what could essentially be seen as “Moby Dick” in reverse with the whale this time taking on the role of the vengeance seeking Captain Ahab relentlessly hunting his prey in Captain Nolan. Nolan though is an interesting character for while he might seem like a clone of Quint seeing how both ruthlessly hunt animals for profit, but Nolan is not hunting these creatures out of a deep seated desire for revenge but rather the simple desire to pay off his boat and return to Ireland. True having an actor like Harris really raises the role and unquestionable sells the journey Nolan is forced to take over the course of the film, even coming to a point where he finds himself comparing his actions to those of the drunk driver which killed his own family. Harris reportedly enjoyed making this film and it shows with the thoughtful performance he gives here even to the extent that he insisted on doing all his own stunts, something that would on several occasions almost kill him in the process.


Okay I know the idea of an animal seeking revenge is unquestionably a far-fetched one as I don’t think that its an emotion they are even capable of. It would also be the same idea which would later sink the “Jaws” franchise” and it is none the more believable here despite the best efforts of Anderson who stops off trying to play things smart with the whale pushing his dead mate onto the island, before sinking fishing boats and driving away the supplies of fish which the island rely on. From here though it becomes increasingly far-fetched as it is soon knocking out essential support legs on Nolan’s dockside house aswell as severing the fuel lines to the village causing a huge fire to erupt and engulf have the village in flames. All things which I doubt even the smartest of whales would be able to do and things which only mark the randomness to come as the whale manages to convince Nolan and his crew to follow it into the icy north using nothing but the same gestures we have come to expect from these animals asking for more fish.


When it comes to the orca effects originally I thought that it was solely trained whales and stock footage, but what is surprising is that a realistic animatronic whale was also used as part of the filming. In fact it would prove to be so realistic that animal activists mistook it for a real whale while protesting the production trucks. The orca attacks are also played largely true to nature, with cast members being pulled over board rather than anything “Free Willy” style attacks. Anderson only really allows himself a fantastical leap with these attack scenes once during the scene were the orca attacks Nolan’s house and in doing so tearing off Bo Derek’s leg, in a scene shot arguably similar to Quinn’s death in “Jaws”. This scene is also about gory as the film gets, while the death of the female orca and the miscarriage of her calf prove far more haunting that anything else the film has to offer, but then this is a film like “Jaws” where a minimal amount of gore goes a long way.


If I was to grumble over any aspect of the film it would be the sudden ending, were the climatic showdown between Nolan and the orca suddenly comes crashing to a sudden and abrupt ending, before we are treated to the warbling end credit music that had me scrambling for the remote to make it end.  Still credit has to be given to Anderson for going with such a ballsy ending, yet ultimately a fitting one even if it might not seem like it at first.


While this might not be even in the same league as “Jaws” it comes closer than most knock offs did, while certainly helped as I mentioned earlier by the casting of Harris. Equally the pacing is brisk enough that it doesn't outstay its welcome even if the finale seems come perhaps alittle too out of leftfield. However with the orca antics not limited to just killing off random cast members, there is plenty of orca action to enjoy and when compared to the recent animals gone rogue movies we are bombarded with currently with their cheap cgi, it only really makes this one all the more enjoyable.
Posted by Elwood Jones at 15:14