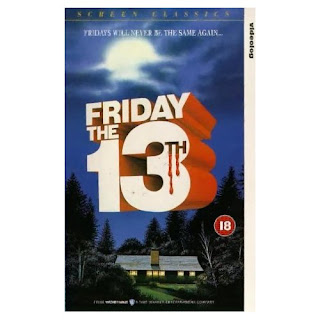 Today is kind of a chance of pace, as this review is being written as part of the “Final Girl Film Club” which is of course part of the fantastic Final Girl blog run by Stacie Ponder, who quite rightfully in the midst of the remake of this months pick, has given us a chance to look back at the original, a film that I’m personally a huge fan of and is which is the first entry in one of the longest running horror franchises at 10 entries not including a spin off movie and TV series, something that few horror films manage to achieve outside of “Nightmare on Elm Street”. I am of course if you have for some strange reason, not guessed that I'm of course referring to the legendry “Friday the 13th”!!


So let’s not dwell on the fact that they have had the audacity to remake a true horror classic (aswell a 15 rated flick none the less) and instead, join me as we take a trip back to Crystal Lake to see were it all began.


Plot: Originally closed back in the late 50’s, after two camp councillors are butchered by an unknown assailant, Camp Crystal Lake is preparing to be reopened once more several years later, as a new group of councillors arrive at the camp, only soon to find themselves the target of the same killer who once more has some real nasty intentions.

Review: “Friday The 13th” it is safe to say a true horror classic and has been for many horror fans been a right of passage, aswell prime sleepover fodder since it’s release and like all classic horror films it still retains it’s ability to shock even now in these times when most of the films released around the same time have lost thier edge, Friday the 13th along with a few select others still maintains the shocks.
Following hot on the heels of John Carpenters equally classic “Halloween” which had started the slasher craze in 1978, it wouldn’t be until the release of Friday the 13th that the slasher genre would be come an integral part of the horror genre, spawning numerous copycat’s eager to cash in on the success of this new genre, with few coming close to matching the genius of this first film in the series and without a doubt certainly one of the most strongest entries, setting the foundations for which the series would build upon with future instalments, by giving us our first views of the now notorious camp site, which itself at the time was a new and original setting with most similar films at the time being set in suburbia, here in this setting the characters were going to the evil, rather than the evil coming to them, which until this point had been the traditional setup, with evil coming to the peaceful streets of suburbia, by having them going to the evil, it opened up a whole new wealth of posibilities, as now no one is safe, somthing that part three in perticular would be keen to enforce, when in the trailer the narator refers to these woods as "Jasons Woods"
So after the opening slaying of the two horny councillors, in a scene which bares more than a slight similarity to that of “Halloween” with the killer remaining firmly off screen, an idea which is continued as the new batch of councillors are killed off, with occasionally the audience getting to see an arm or a hand, but never enough to give away who the mystery loon is, which brings up a slight grumble, when you have the big final revel to find out its a character whose only just appeared and which thanks to “Scream” is now one of the worst kept surprise endings ever rivalled only by “The Sixth Sense” but even knowing this the film still manages to throw out a fair amount of red herrings that will have you guessing till the final revel, who the killer is before finishing off with one of the all time great horror endings, which thanks to some rather misguiding music, has on more than one viewing caught me off guard and feeling the sudden need for an underwear change.
The tense atmosphere slowly builds as the film progresses and the bodies begin to stack up, with the councillors being dispatched in increasingly gory ways, thanks largely to some great FX work by Tom Savini, with the most memorable of course being the famous arrow through the throat, as suffered by a young Kevin Bacon and it’s safe to say, that these death scenes, are probably the reason that the film has lasted as long as it has, with the whole script being built around the various death scenes. I still remember the first time I saw this film, being completely blown away by how you actually got to see the payoff, which is usually cut away from at the last second, in most horror films, but Friday the 13th would finally give the gore hounds what they all had longed to see, which again is thanks largely to Savini, who was egar to see just how far he could push the limits of Special FX at the time, with each death scene constantly trying to outdo the last.
Admittedly the acting is less special, with most of the cast’s acting being nothing to really report on, but is not so horrible to detract from the film, though special mention of course being Betsy Palmer who stars as Mrs Voorhees and manages to act everyone else off the screen, in her brief screen time as she turns from a friendly homemaker to full blown psycho in a matter of minutes, as her true madness is slowly revealed. It's really a credit to her performance that this change works as well as it does, seeing how when she first appears, she appears to be the kind of motherly figure you’d appreciate a hug from and no doubt enjoys making apple pie, an illusion shattered to pieces when, she revels her real grudge against horny camp councillors, which is definatly made clear as she snaps in front of Alice, adding even more creepyness by taking moments out of the chase with Alice to talk to herself, channeling her deformed son Jason, while staring into the camera with a genuinely creepy smile on her face. It’s interesting to note that Betsy Palmer would have turned down the role, had she not been in such desperate need for a new car, calling the film “a piece of shit” after reading the script. Another popular piece of fanboy history, also says that she originally won the role, due to being able to drive out to the set, still even if this is true it is hard to imagine any other actress being able to make the role as memorable as she did, even if the series is remembered more for the later antics of Jason, it would be his mother that paved the way for what is still one of my favourite horror series.

Studio bosses may be adding Friday the 13th to the ever increasing list of remakes and with decent remakes of these classic films few (Rob Zombie’s Halloween being a notable exception) and with all reports at the moments currently not showing this latest addition, as the one remake that will be break the chain of bad remakes that audiences have so far been forced to endure, but at least on the positive side, the fans will always have the classic original to return to.
Posted by Elwood Jones at 15:07