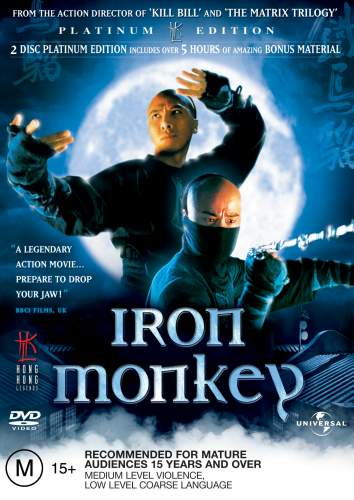 It’s sometimes hard not to forget that Yuen Woo-Ping is a director in his own right, especially when more commonly being better known for his fight choreography for films such as “Kill Bill” (2003) and “The Matrix” (1999) aswell as helping to bring art house kung fu to mainstream audiences with his work on “Crouching Tiger, Hidden Dragon” (2000), while his work as a director seeing him being responsible for other equally great films such as the classic early Jackie Chan movies “Snake in the Eagle’s Shadow” (1978) and “Drunken Master” (1978) while for myself “Iron Monkey” (1993) remains one if not the best of his films, while at the same time also proving a highly accessible movie for newcomers to the Kung Fu genre.

Centring on the city doctor Yang Tianchun (Rongguang Yu), who by day treats the citizens of the city, while at night becoming the titular “Iron Monkey”, a vigilante and hero to the town folk and essentially a Kung Fu version of Robin Hood, stealing from the rich governor of the city, who has become obsessed with capturing Iron Monkey.
When the martial artist Wong Kei-ying (Donnie Yen) arrives in town with his son Wong Fei-hung (Sze-Man Tsang), he is mistaken for being Iron Monkey and arrested, only for the real Iron Monkey to disrupt his trial. Now to free his son he is forced into making a deal with the governor to capture Iron Monkey for good.


“Iron Monkey” is far from a serious Kung Fu movie, which is essentially what makes it such an assessable movie, with its jokey tone throughout making it easily comparable to other similar films in the genre such “Police Story” (1985) and “Magnificent Warriors” (1987), which when combined with some truly great fight sequences only adds to it’s appeal, though the quality of these sequences will come as little surprise to anyone familiar with Woo-Ping’s work as here he manages to balance both choreographing duties as well as directorial ones, to a powerful effect especially when blending the fantasy elements of wire work with more traditional martial arts and making it only harder things to understand is why it has taken, so long for Donnie Yen to become such a recognised martial artist, only having truly come to the forefront in the last couple of years, having spent so many years in the shadow of the likes of Jackie Chan and Jet Li and once again he is on great form here, with Woo-Ping knowing exactly how to get the most out of not only Yen, but the whole cast, especially when it comes to the fight scenes for which throughout seems to be a constant game of one up man ship, as the fights and martial arts sequences continue to get bigger and better as the film goes on, building up to it’s memorable battle atop of flaming wooden poles, which is without a doubt one of my favourite fight scenes, especially for how fluid the fight remains, despite the heavy use of wires and location being fought in, which is truly a credit to the choreographing talent of Woo-Ping as it could easily have not been sold as well as it is, even despite being heavy in Wuxia styling.
It is also certainly also a ballsy move to introduce one bad guy, only to remove him in third quarter to introduce an even tougher bad guy, with the rogue shaolin Monk Hin Hung (Yee Kwan Yan) and his team of rebels arrive in the city, not only providing a tougher challenge but also helping to ramp up the action, as both Iron Monkey and Kei-ying face these much tougher opponents, whose fight sequences make up many of the highlights of the finale.

Outside of the spectacular fight sequences, the story is not just there to provide a way to move proceedings from one fight to the next, but instead provides enough interest to be more than filler, as it combines Jackie Chan style humour with occasional bursts of supposed eastern philosophy, while at the same time even finding time to include several scenes of actual true emotion, especially when looking at the back story of Orchid (Jean Wang) and how she came to become the doctors assistant, having previous been a prostitute whose child died during birth, or even the father son relations ship between Kei-Ying and Fei-hung, as Kei-Ying tries to remain a strict teacher, while at the same time feeling the weight of his responsibilities as a father. It is also worth noting that Fei-hung is actually the younger version of the Chinese folk hero of the same name, whose life would be further explored with the “Once Upon a Time in China” films and Tsang does a great job of playing the child version of this character and though you have to look past the fact it is a girl playing a male character, she still manages to portray him with great martial arts ability even at this young age.

Re-released stateside by the Weinstein’s in a butchered cut with re-worked soundtrack this film loses a lot of it’s charm and I would instead recommend watching it in original cut, as released under the “Hong Kong Legends” label, who have also done a good dubbed version, of which I own the VHS copy and which for myself is my preferred way to watch this film, especially with so much action happening on the screen, it not only helps maintain your focus on the action, but also adds that level of old school kung fu cheese to the proceedings, even if it easily rises above the more forgettable titles of similar style to this film, which exist in the genre and which are also best viewed in this way, especially more so when throughout this film it seems like Woo-Ping is set on cramming in every martial arts cliché in the book, not that your care, especially with the level of action on offer here.

True “Iron Monkey” might be flawed, but it is essentially a fun and exciting film, which isn’t about taking itself seriously and more about entertaining the viewer, as it continuously builds upon itself throughout, while providing welcome relief to those of us getting slightly over whelmed by the more arty and thought provoking martial art movies such a Hero (2002) and while they might be undeniably good movies, it’s often just as good to check your brain at the door and just loose yourself in the Kung Fu goodness of a film like this which like so many Godzilla movies, truly is cinematic junk food for the soul.
Posted by Elwood Jones at 23:20