H Is For Hard Boiled 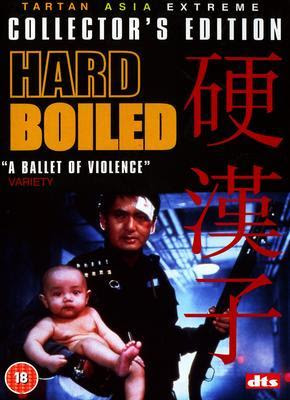 Plot: Tequila (Yun-Fat) is a detective who it would seem plays solely by his own rules, whom after loosing his partner during a raid on a teahouse is forced to team up with an undercover agent (Leung), when he uncovers a war between two major gun smugglers.


Review: The story goes that after having spent the majority of his career glamorising criminals, John Woo got tired of being criticised and set out to make a film which glamorised the police instead, which I think it’s pretty safe to say he was more than a little successful with this film, which not only glamorises the crime fighting actions of the Police, but also gives us, without question one of the coolest cops to ever grace the screen, even if Tequila’s personal brand of justice is anything close to traditional police procedure.

It might be true that in recent years John Woo, might have seemed to have lost his way especially after suffering several career missteps with some less than brilliant films, he made in the Hollywood studio system, before his storming returning to form with “Red Cliff” (2008) marking his return to the same Hong Kong studio system he made his career with. while this film for myself personally marking the water mark of the early Hong Kong years, which provided his ticket to Hollywood, who at the time were keen to replicate the style and success (read cash in) of the Hong Kong action films, which was unsuprising seeing how it was Woo, who had originally lead the charge with “The Killer” (1989) and now took full advantage of the opportunity especially with Hong Kong audiences changing and audiences craving comedies rather than the bullet ballets that he and directors like Ringo Lam were crafting.
Still for myself this film is the true high water mark of Woo’s career, as not only does it contain all of his trademarks, but pretty much hits the ground running as he opens with some light jazz followed by a shootout in a tea house, all with in the space of the opening ten minuites, setting a brief pace that Woo never once chooses to let up, a the bullets fly and locations are reduced to rubble and all with barely a reload in sight.

The action scenes are were Woo truly comes into his own, for not only does the trailer not even cover half of the action scenes, but he also doubles the length of the average action sequence, while also ensuring that he is not just repeating the same scenes of carnage, but rather trying to top what he has shown the audience already, while still finding the time to include his trademarks such as the Mexican Stand off and Tequila’s dual pistols, which thanks to Woo is now an image frequently associated with Chow Yun-Fat, despite the fact it was only in the movies he made with Woo that he uses such a move. The hospital shootout finale alone is a stunning thirty plus minutes of non stop action, despite being a questionable in terms of tastefulness having been carried across from the original script, which had centred around a plot involving poisoned baby formula which Woo disliked, changing the script to resolve around a gun running operation instead, which was certainly for the best while no doubt giving Woo further excuse to have another shoot out, even turning a tea house into a key smuggling location, which is busted open during the opening raid by Tequila’s team.

Chow Yun-Fat is clearly on the top of his game here, with Woo once again proving to be one of the few directors, who know how to truly utilise his charisma and ability as an action hero, something which it could be argued that perhaps only Ringo Lam came close to replicating, which has over the years lead less education movies goers to question his appeal as an actor, though you’d need only watch this film, to know why he has such a cult like following, for he takes the character of Tequila and ensures that it’s impossible to image the role being played by anyone else and while Woo would struggle to replicate these sorts of characters with other actors in his later films, here the potent combination of this actor / director combo has never been better, with Yun-Fat effortlessly spouting cool one liners, while brandishing his trademark dual pistols, as he takes on the countless triad masses. On the flipside undercover cop Alan, carries severe guilt over every life he is forced to take in the line of his work, living a solitary existence on his boat, surrounded by paper cranes, each of which representing a taken life.

Meanwhile Anthony Wong is on top villain duties as the triad leader Johnny Wong, who is not only ruthless but lacks even a shred of remorse for any of his actions, while ironically running his gun smuggling operation from a hospital basement, which also provides the setting for the spectacular finale, were Woo it would seem not content from having already provided three standout action sequences earlier, somehow manages to top all of them again, while perhaps pushing the boundaries of taste with his choice of location, which provides of the truly memorable moments of the film, in which Tequila is attempting to escape the hospital with a baby, only for the baby to put out the flames on his leg with it’s stream of urine, leading to perhaps one of the greatest lines in Hong Kong cinema ever “Hey Kid, Your piss put out my flames”.

“Hard Boiled” is not a subtle film, but then who really wants a subtle action film? Still whatever John Woo does with his career, he will always be able to rest easy that he crafted not only one of the best action films ever, bet set a pretty high bench mark for the films which followed and one that is yet to truly be beaten, even by the master himself who would go on to make other great films and a few aforementioned duffs, but then I doubt even Woo would find it hard to top this one, with the closest being Woo's Xbox 360 launch title "Stranglehold" which played like a sequel, though despite the rumbling from the rumour mill, it looks like we might have to wait that bit longer, before Tequila hits our screens again, so in the meantime why not just remind yourself why Woo is the legend he is.
Posted by Elwood Jones at 12:45