Behind The Mask: The Rise of Leslie Vernon 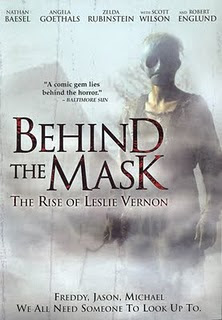 Plot: Leslie Vernon (Baesel) is an aspiring serial killer who models his murders using Horror film conventions, inviting a documentary crew to follow him as he prepares to stage his masterpiece.

Review: Since the release of “Man Bites Dog” (1992) there have been numerous attempts to recreate the idea, which featured a documentary crew following a serial killer as he goes about his chosen profession, with the most note worthy to date being the dire “The Last Horror Movie” (2003), which is interestingly enough also the film being stolen in the UK video piracy advert, which in all honesty is a much better idea than actually wasting your money on it, but here Director Glosserman has instead thrown us a curve ball, no doubt realising that he couldn’t top “Man Bites Dog”, he has instead set the film with in the same fantasy film within a film world which Quentin Tarantino more recently has preferred to set his films, creating a film which is not only darkly comic but also gives the occasional clever nod to it’s source material.

Setting the film within a film, certainly helps to not only give the film a new spin, but also throws the viewer off step, for this is world that they are certainly not used to, but in doing so it has allowed Glosserman to have his characters reference slasher legends, such as Freddy, Jason and even Michael Myers, as the film opens on the streets of Elm St, were we also get a fun cameo from Kane Hodder as Freddy Krugers neighbour, before the film then moves onto the banks of crystal lake, with these fiction killers being viewed with a sense of almost awe, in particular when we are introduced to Leslie’s mentor, who has long since retired, commenting how he was practically forced out by the aforementioned mentioned slashers “Raising the game to a whole new level”. Still it’s the conversations between Leslie and his mentor, that provide the most insight into this world, as we see his mentor still practicing yoga style breathing techniques, which despite either character explaining the reason, will be clear to those familiar with the genre as being an effective way of faking your death.

Still not content to keep the film within the film world, Glosserman throws us a further curve ball, by stepping out of this world and letting the viewer, watch the film as an actual slasher film and all with a simple change of film stock from handheld cameras for the documentary world to cinefilm for when Glosserman steps back and allows us to view it as a slasher film, which was confusing to begin with until it hit home what he was trying to achieve, but then Glosserman isn’t a director who feels he constantly needs to hold the audiences hand or constantly dumb things down with continual explanation, preferring it would seem to allow them work things out for themselves.

Much like “Man Bites Dog”, there is a heavy focus on the preparation, which goes into what he does with majority of the running time being dedicated to the setup for the final stalk and slash sequence, as Leslie walks the documentary crew through the setup of the location and how he intends for the action to play out, even clearing up some horror clichés, as he explains almost why so many stupid things which happen in slasher films, like windows failing to open actually happen, which if we are to believe what Leslie tells us, is largely down to the forward planning of the slasher. Still it’s this deconstruction of the genre, which provides several of the films highlights, including Leslies own personal training regime, as he shown having to train daily to keep his fitness levels up, while his house is filled with medical textbooks, ensuring that he is hitting all the right spots on his intended victims and only highlighting the thought which has been put into the character, while bringing a sense of realism to the film, rather than leaving the audience to believe that he was born a natural slasher.

The cast are all likeable enough, with the documentary crew coming across more curious than Naive to what Leslie does and while they don’t become as involved as the crew in “Man Bites Dog”, they still sell the reason that they are filming the documentary well, while the teens making up the intended targets of the slaughter Leslie are planning coming off more stereotypical, though I suspected this was the intention of Glosserman, especially with some of the twists he pulls out during the finale, while he also handles the use of his horror icons well, as rather than have them upfront and centre, he instead keeps them squarely in supporting if still memorable roles, with Poltergeist's Zelda Rubinstein appearing as a libarian, while Robert Englund here embodies Halloween’s “Dr. Loomis” as Doc Halloran, a character who is underused here, no doubt due to the glaring similarities and serves more as another horror nod, rather than a character with any importance, despite Leslie’s mentor declaring him “Leslie’s Ahab” which only makes it more of a shame that Glosserman chose to not expand on this character, much like his decision to make the finale, a straightforward slasher and almost feels like he attempting to redeem the documentary crew, for their earlier actions and in particular their bizarre willingness to go along with Leslie plotting.

In the end it might fail to reach the same level as “Man Bites Dog” especially in terms of Leslie chosen profession, which Leslie instead shows a much more restrained demeanour and despite the earlier mentioned flaws it’s still a film worthy of being compared to “Man Bites Dog”, if only for attempting to do something different, rather than a straight adaptation and while it might have it’s moments of plagiarism, but still has a lot of original ideas to balance things out, including some great character design work especially with Leslie, who is a potential horror icon in the making and it’s this raw potential on show here, which alone makes it worth a look.
Posted by Elwood Jones at 12:41