All The Boys Love Mandy Lane 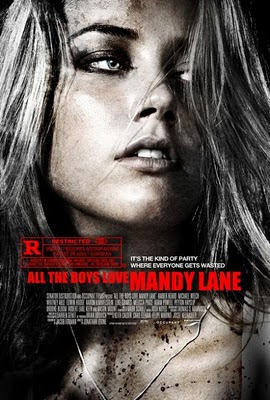 Plot: Mandy Lane (Heard) is beautiful and pure while also being desired by the majority of the boys at her school and also sharing a close friendship with outcast Emmet (Welch). Invited to a party at a friends ranch, Mandy soon becomes a target of lust for the boys, all eager to be the one who finally manages to sleep with her, but when a hooded stranger shows up at the ranch, its only the beginning of a real killer weekend.

Review: What is it about the Weinstein’s which causes them to make such lousy decisions, with the most bile inducing of these choices, especially for those us based in the UK being their decision to split the Tarantino / Rodriguez double feature homage “Grindhouse” into it’s separate features, rather than allow us Brits to see the original cut of the film, after it didn’t perform as well as expected stateside and this is only after a heavy international promotional campaign, making it only all the more of a kick in the teeth when they didn’t even bother with either a limited cinema release or DVD release of this cut. This decision did however prompt me to fly out to LA to see the film, in an insane weekend which saw me leave work to get on a plane for god knows how many hours, to then go from the airport on a hunt for a cinema showing the film, before then returning to the airport and flying back to the UK and pretty much straight back to work the next day, which might sound insane but was honestly was totally worth it! Due to the failure of that film, it would also serve to have a knock on effect on the distribution for this film, which at the time was also owned by the Weinstein’s, only for them to sell the film beliving that "Grindhouse" failing to make an impact was the begining of a decline in popularity for horror and sold the film to “Senator Entertainment US” only for them to go out of business and throw the film into distribution limbo, which meant that it has only now received a US release, almost three years after it had it’s UK release, though honestly despite this I have only now just gotten around to watching it myself.

From the beginning Director Levine chooses to shoot the character of Mandy with an almost siren esq aura, as a pure creature whom the boys in her high school are willing to do anything to impress and more to the point anything to get into her pants. This is only further proven by one member of the popular group of kids, who not only fails fatally with his attempt to impress her by jumping off the roof of his house during the opening pool party, but also provides a great example of what can be best described as “Thinning the herd”. Flash forward nine months and Mandy is non the less alluring with the story of what happened at the party only adding to her allure it would seem, somthing especially proven by the latest group of boys all wanting to try their chances. Still Mandy is the sort of girl that many of us remember from school who had that something about them, which made them seemingly irresistible to our hormone driven selves back then and it’s a credit to Heard that she has managed to not only capture this essence but also convincingly portray on screen and archetype which can’t truly be described, while the rest of the cast get the considerably easier task of playing more character with more traditional and cookie cutter style characterisation.

From the outset it might not seem any different from any of the other cookie cutter slashers filling the market, after all we have the usual group of oversexed teens, going to some remote location and meeting their maker in a variety of creative ways. So yep that’s all covered here, but were it differs is the clear desire by Director Levine to not obey the restrictions of the genre, as he plays around with camera styles and keeps an almost dream like feeling running throughout the film, only allowing the occasional moment of sobriety in which he shoots the film straight, all this aided by a soundtrack which avoids the usual noisy indie bands instead opting for chilled out shoegaze bands and a classical score to keep the calm feeling, which he sundrenched and isolated ranch setting only further instils, only making it the more effective when he takes his slasher from the traditional nocturnal stalk and slash pattern and continues into brilliant daylight, turning paradise truly into a nightmarish landscape, similar to the effect seen using the Australian outback in Greg McLean’s shocking debut “Wolf Creek” (2005), with the colour palette leaning towards yellows and browns providing an interesting washed out look.

When it comes to the gore, Levine gets pretty creative and gives us some different deaths than the usual Teen meets Axe / Knife / Random blunt object and even though the identity of the hooded slasher is revealed shortly after he is introduced, it still doesn’t take anything away from the film, as this killer is more about motive than mystery, especially when appears to enjoy taunting his intended victims and takes the time to play with each of them, before delivering the final death blows. Still Levine at least attempts to throw a red hearing into the mix, whom even after the slasher is revealed is still left with questionable motives, until Levine decides to remove them from the equation.

“All The Boys Love Mandy Lane” is a low key horror film and I think that’s why it works so well, as it doesn’t feel the needs to be big, brash and loud like so many of it’s slasher counterparts and while it’s style might turn off your more hyperactive slasher fan, for those of you who like an edge of indie cool to your films, then this might be what happens when you apply that edge to the slasher genre, especially with Levine not allowing his vision to be restricted and instead filming it how he wants to and forcing the rest of the world to bend to his vision and although it might turn of some, it’s a refreshing change from just going through the same slasher motions, which “Wolf Creek” also used if perhaps with a more brutal edge than seen here.
Posted by Elwood Jones at 01:14

Email ThisBlogThis!Share to TwitterShare to FacebookShare to Pinterest
Labels: As Screwed Up By The Weinsteins, School Daze, Slasher