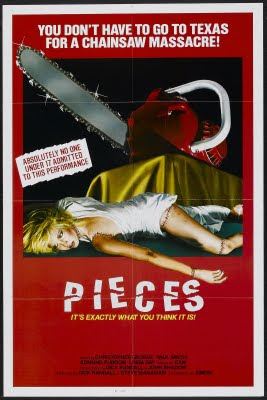 Plot: A chainsaw welding killer with a bizarre obsession with jigsaw puzzles, stalks the young co-eds of a local college campus

Review: “Pieces” is a strange little film, despite the most traditional of slasher plots, it still manages more than it’s share of surreal moments to say the least and yet for some reason we the audience accept it as the norm, while also certainly doesn’t take away any of the fun, so that your not left asking yourself questions like were the hell that Kung Fu guy came from? (The simple answer to that one being that the producer Dick Randall, was shooting “Bruceploitation” movies nearby and Simón basically took advantage of the opportunity), or was the girl on the skateboard seen skating in the sheet plate glass was part of the killers plot or not.?

Opening with the killer as a young boy putting together a jigsaw, which turns out to be more raunchy than the usual ones as this one is of a naked woman (do they seriously make jigsaws like that?) and as per the rule that as soon as you choose to look at anything slightly risqué that your mum will walk in, unsurprisingly so does his who proceeds to chastise him for it, while also uncovering an impressive pile of smut that he has hidden away. In fact his collection is so extensive it did have me wondering how he managed to amass such a collection, especially when the rest of us at that age had to try and find our own porn discarded in hedge rows or steal it from older siblings. Facing his beloved collection being burned he makes what he considers to be the only rational choice and kills her with an axe, followed by sawing her head off and making the whole thing look like a home invasion killing, which even more bizarrely the police don’t even question, instead shipping him off to live with his aunt and no doubt further his serial killer urges seeing how forty years later he is lurking the college campus looking for victims for his latest scheme.

For some reason the police are pretty blasé to say the least about the fact that someone is running around the campus violently killing the student population with a chainsaw, with the police chief at one point dismissing a reporter’s question about the rumours of a killer being on the loose, by claiming “There are Maniac rumours at that school every couple of months!”, I mean seriously what sort of school really openly has a reputation like that, or they located perhaps a little too close to the local asylum? This however is just one of the numerous random bits of dialogue that stands out in this film, much like the classy line

Meanwhile the killing are all pretty random, with no real link between the victims other than that they are all horny young students. Still the deaths are were the killer really gets creative even with the Chainsaw being his ohh so subtle weapon of choice, with the killer finding frequently less plausible methods to conceal it, with my personal favourite being the elevator death, were he just holds it behind his back which somehow his victim fails to register, because of course it’s perfectly normal to be just carrying around a chainsaw. Still it’s these death scenes were Simón seems to have invested the most effort, as it certainly wasn’t in any other area of the film, making similar in many ways to the majority of the 80’s slasher output were it’s more about the spectacle than the characterisation. Still it doesn’t stop this film from being alot of fun and no doubt why it has become a favourite at midnight screenings and Horror movie marathons, let alone it’s completely bonkers shock ending, which providing someone hasn’t already tipped you off about it, will certainly catch you completely by surprise.

The gore despite being limited thanks to a surprisingly low body count, especially for a film called “Pieces”, let alone the cheeky tagline of

were you’d expect the bodies to be piling up, but like the film it cheekily nods to it is pretty restrained, though when you do get a death it is still highly visceral, with limbs being lopped off and bloody wounds comically painting the walls, which only adds to the fun for as graphic as this film get’s it’s aim more for shock and awe rather than trying to disgust the audience, especially with some of the effect looking so comically bad such as the opening axe to the head.

While this film might not be one of better slashers of the 80’s it certainly is not one of the worst, with it’s surreal moments making it a talking point for horror fans and trash cinema aficionados’ since it’s release it and it’s certainly a film which is best viewed with a group, to really make the most out of ribbing on the surreal moments, the sheer number of which making it hard to believe that some of it wasn’t intentional and covers for the numerous flaws throughout and seeing on how many moments work best with an element of surprise, I will recommend that it’s best to watch this film on DVD first, to avoid having them telegraphed by a rabid horror movie marathon and plus it means you can go to that same movie marathon and be a jerk like everyone else. As for director Simón he is not a director who I’ve had a huge amount of experience with outside of “Slugs” (1988), which certainly wasn’t as much fun as this film and despite his questionable talent behind the lens, it hasn’t stopped him building a dedicated fan base and with this film I can understand the appeal a little more than before, even if I’m not quite ready to join his fan base ranks.
Posted by Elwood Jones at 12:05